Sunday 30th May. In glorious weather, our age-grade teams enjoyed thier fifth and final week of competitive rugby as our age-grade teams welcomed Sefton, Aldwinians, Broughton Park and Lymm to Eccles. Match reports and photos are posted below for your enjoyment.

We've experienced over a year without rugby and despite the difficulties, challenges and injuries that naturally occur when returning from such a long suspension, we hope players and parents have still enjoyed this somewhat abreviated M&J season and being back at the club.

As a break from tradition (where we normally recuperate May-September) this summer the club has seeded its pitches early so we can make full use of the facilties right through June, July and August with a variety of sports activities and social events for members. Please check out the calendar here https://eccles.rfu.club/news/summer-season-2021

Please check with your coaches and managers for your team summer plans and your presentation evenings, which commence in June.

We look forward to seeing you at the club over the summer. Membership for the new 2021/22 season will open in August.

Well, the last match of the season. Sefton came to Fortress Eccles with only 6 players and 3 of those were only 6 year old so it was decided that it wouldn't be fair to take them to pieces with two very strong Eccles teams on show, so we mixed everyone together made a much bigger pitch and made up two mixed teams and let the chaos ensue.

It wasn't what I had planned but it seemed to work and everyone had a great time with some good skills on show with lots of strong running, some great scores and lots of tags taken. Ellis was the Eccles man of the match chosen by the Sefton coach . What was so good about the matches was that both sets of players blended so well, with the Sefton boys and girls getting as much ball as the Eccles boys. Everybody had a great morning's rugby with the sun shining and a very appreciative group of spectators . So well done boys and girls even your grumpy coach enjoyed himself! After a last minute fixture tweak, and an unfortunate train cancellation this week's opposition looked different to the one expected. Sefton visited Eccles light on numbers but heavy on application and passion!
On a warm Sunday morning that we've not seen for what feels like eternity, the under 8s put everything they've been working on this season into action. They demonstrated free-flowing, expressive rugby and seemed to really enjoy themselves. What really impressed the coaches this week was their discipline and respect for the referee and the opposition. They know that the referee's word is final, and on Sunday they showed it. Proud of them all.
A special mention to men of the match Henry (who's been a consistent superstar all year) and Sonny who's coming back from a nasty illness (but you could never tell). Sunday saw the last day of the shortened season dawned with cloudless skies and a reminder to parents to bring plenty of water and sun screen to the game today!
Owing to the Covid cancellation of the Bolton fixtures the U9s and U10s found themselves without opponents for the last day of the season. Some quick thinking on the part of Coach Dan and Coach Pierto, saw the teams have a brief solo training session and then a couple of U9s v U10s matches and then a mixed-side match.
The U10s demonstrated their advanced physicality and increased knowledge of the game and versatility with the ball, with some great passing and running they scored several tries. The U9s, some of whom have only played the last few matches and one player Travis made his debut, certainly got stuck in to the game and defended very well, learning valuable lessons from the older team.
The overriding positive result was that all the players had fun, enjoyed the games and rounded off a somewhat shortened and strange season.  The matches demonstrated that there is a lot of potential in both these teams with excellent teamwork and skills on display ready to be developed and used to Eccles’ advantage in matches next season.
Thank you to Coach Pierto for refereeing and a massive ‘Thank You‘ to all parents for bringing the players to training sessions and matches and for their unwavering support throughout a challenging period. I Hope that everyone has a fabulous summer and hope to see some of you down at the club for the various social activities. The U9s are carrying on with some basic fitness training for a few more weeks and details of this will be posted on their WhatsApp group.
Report: Leeann Aspinall 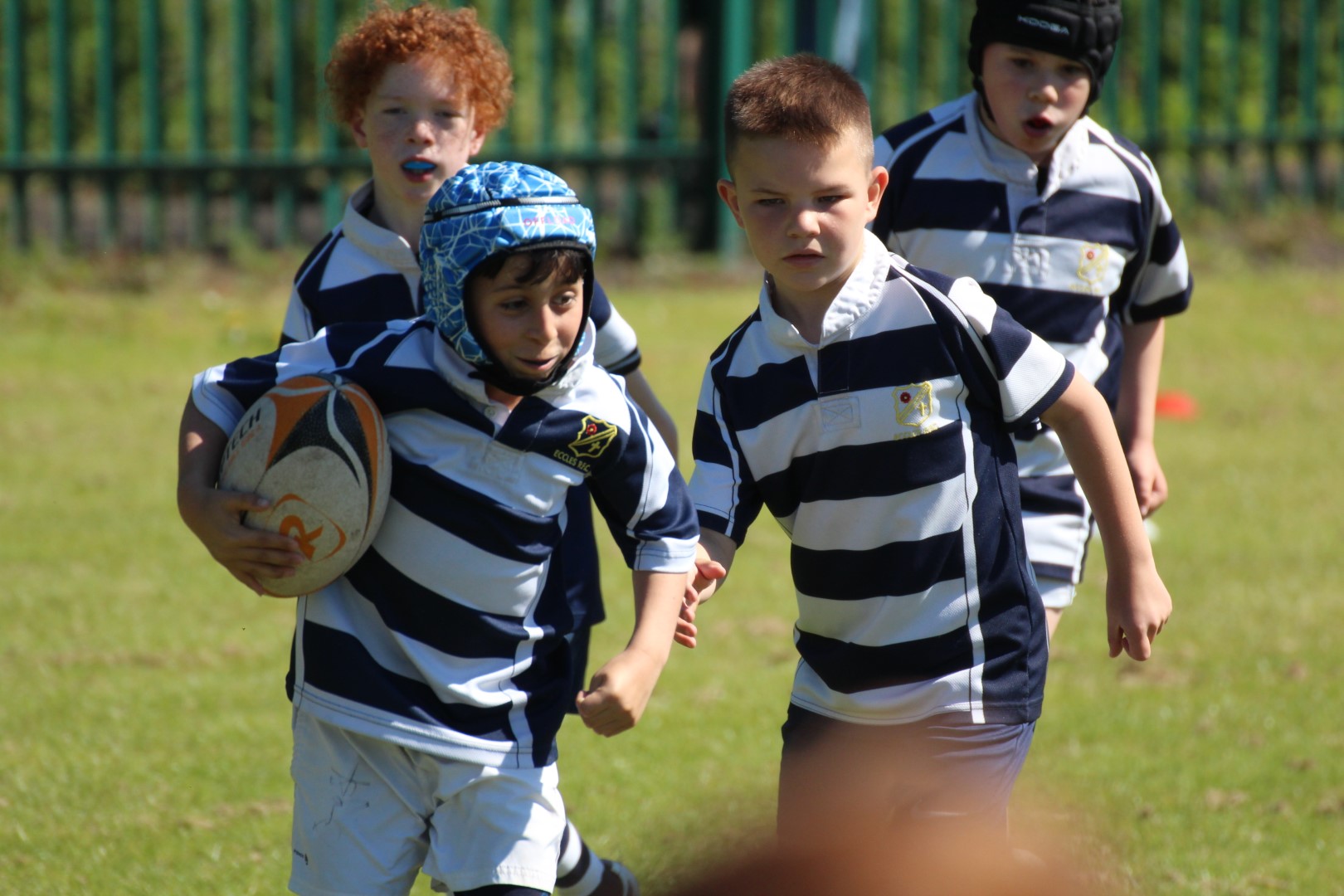 Sunday 30 May. A great game to see the season out for the U11's today against Broughton Park.  Adapted rules to accommodate BP were brought in, which the boys thought would give the   opposition the upperhand, but quite the opposite happened.  The first 10 minutes saw tries coming in thick and fast from the confident Eccles side.  Owen was leading the way with ferocious tackles left right and centre forcing Broughton to loose possession more than once.

After the first water break the Eccles boys were a little too complacent and Broughton Park's team talk spurred them on. The next 10 minutes was a much closer contest, with Broughton breaking the Eccles defence and pulling back a few tries.

The heat was a challenge at times and the drink breaks were well needed after the graft the lads were putting in.
Chris Gaffey gave a clear team talk at half time which had the lads back at it in the 3rd 10 mins with better support, big runs from Billy, an awesome try and some creasing tackles which all saw him earn the Player's Player medal.  Owen was awarded Coaches' Player recognition for his attitude, constant pressure and killer tackles. Well done lads!
Report: Paul Ogden.


Sunday 13 June. U11s touch rugby tournament. A scorching hot day for some scorching hot rugby at Manchester Rugby Club.
Four games against two very good sides had the lads grafting from the off.  The first game against Wimslow showed the boys what touch rugby was all about with Wimslow scoring several very convincing tries. The boys quickly got the hang of it though and improved more and more each game.  The commitment the lads showed throughout was commendable considering it was not only their first full game of touch rugby rules but a tournament full of quality teams.

Strong runs from Billy through the middle gained yards everytime and clever passes out wide gave Bryn the chance to show the opposition his pace and a couple of cheeky side steps earned him a quality try. Captain Edward was on it today, running strong, excellent support play and tactical kicking kept the boys spirits high.
Monty kept the momentum going with his fast reactions and Kenzie was always there ready to clear the ball out after the tackle.

Saving the best til last, the final game of the day had the boys in full flow and held Lymm to a very close game. Each of the lads really did step it up and impressed the spectators and Lymm's coach who was very complimentary after the whistle blew. Edward earned himself Players' Player and Kenzie was awarded Coaches' Player.
Thanks to all the parents and players for making the journey and representing Eccles at this very well organised event.
Report: Paul Ogden. Eccles got off to a great start, with three straight wins and every squad member playing their part and making positive contributions. The lads did very well in the heat, played some great rugby and scored some wonderful tries but ultimately ran out of steam on a very hot afternoon, losing the cup semi final to the hosts Heaton Moor, who in turn were defeated by Rochdale in the Final.
This was the U15s first experience of 7s Rugby (a fast intensive game on a full size pitch) and reaching the semi final of such a prestigious competition on the very first attempt is an achievement they can be proud of. A big thank you to all the travelling supporters, especially those who changed their holiday plans to be there. It was a very enjoyable day and a great way to complete the 'season'.
Sqaud: Lucas, Joe, Matt, Jack L, Jack C, Josh, Evan, Harry P, Jake, Finn, Johnny, Leighton.
Eccles 24 - 17 Huddersfield. (HT 12-10) Tries Leighton 2, Lucas 2; Conv Jack L 2.
Eccles 31 - 12 Trafford MV. (HT 19-0) Tries Finn, Joe 2, Johnny, Leighton; Conv Jack L 3.
Eccles 35 - 10 Liverpool Collegiate. (HT 21-0) Tries Leighton 2, Joe, Matt, Jack L; Conv Jack L 1
Eccles 15 - 27 Rochdale. (HT 10-12) Tries Leighton 2, Joe.
Eccles 10 - 36 Heaton Moor. (HT 0-22) Tries Leighton, Joe.
Report and Photos: CG Facebook Match Photos