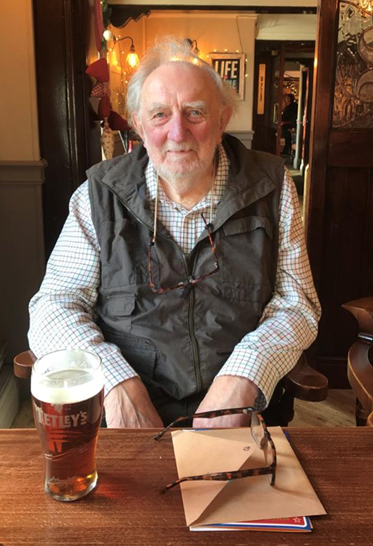 Having joined Kersal, then located at Oldfield Brow Salford, as a young second row in the fifties, Brian moved with them to Stelfox Avenue where he also had a short spell as club steward. After his playing days Brian continued to watch Altrincham Kersal on Saturdays after the family moved to Peel Green in Eccles.

In the 1980’s Brian moved to live on Gorton Street and became a social member of Eccles RFC becoming a familiar face at games and in the bar from the 1980’s until very recently. He was also a familiar face playing and administering with the Evergreens of Rugby (up until he received his gold shorts when 70 years young) who based themselves at Eccles for a good period.

For Lancashire, Brian served on the County Cup Committee and the Disciplinary Committee and helped his wife Ann with logistics when she looked after the County shop. He also served as a County league secretary for a good number of years. All in all the archetypical rugby stalwart, on and off the field from start to finish.

Away from the game, Brian was a broadcaster and show presenter on Salford City Radio. Back in July 2017 Brian generously invited some of the club's colts to join him in the studio for an hour-long interview where they recounted thier expedition experience retracing the steps of the WW1 Salford Pals Battallions through Somme, as they worked towards achieving their Duke of Edinburgh Gold Award at Eccles RFC.

Brian’s funeral will be held at Peel Green Crematorium at 12.20 on Monday 26th July, with refreshments afterwards at Eccles RFC.

Would anyone planning to attend please advise Brian's daughter Fiona [fiona.tewson@gmail.com] in order to gauge the catering requirements. Brian's family have decided to limit floral tributes to immediate family only, and in lieu of flowers invite donations to Prostate Cancer please.