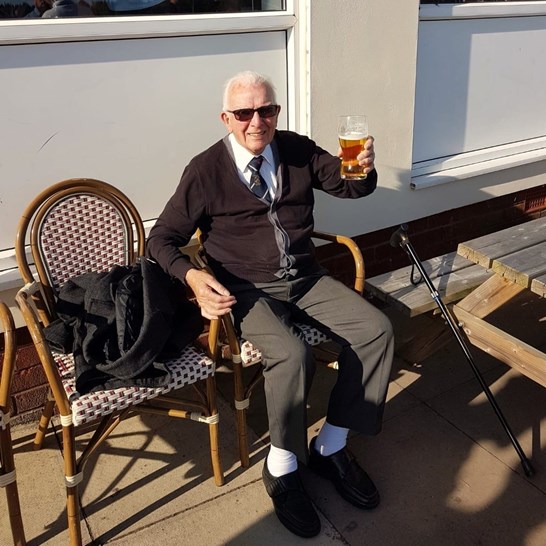 It is with great sadness that we announce the passing of John Bent, peacefully in his sleep last night. John was 96 years old and had been involved with the club since coming down to Gorton Street to watch his son Alan (Benty) play in the late 1970’s. Although John never played himself he had a great love and knowledge of our game and could often be heard on the touchline informing Alan where he was going wrong. When asked by Alan "how would you know, you never played?" his reply would be "I can't milk a cow but I know when the milk's off!"

Mr Bent was a great character in and around the club and went on many rugby tours to the Isle of Man, Ireland and Holland where, at the age of 68, he earned the nickname of The Equaliser after breaking up a gang of pickpockets that were trying to steal wallets by holding one gang member up by the throat until he begged to be released! It's amazing how much strength a few pints of Amstel larger gives you!

For his 90th birthday John went to Gloucester on tour with the U14s, sponsoring the tour shirts and making lots of new young friends. Like he said "You never know when you want someone to help you cross the road".

In his later years, John joined Alan in following the Eccles RFC 1st team both home and away and freely gave our Director of Rugby, Sam Simpson the benefit of his opinion on the tactics of the game, even if Sam hadn't asked for it.

John was a character, a joker, a charmer but most of all a true gentleman who loved life, loved rugby,and most of all loved being part of the Eccles Rugby Club family.  R.I.P John you will be sadly missed by many.

John's funeral will be held on 14th December at Peel Green Crematorium at 10.20, with the wake back at the club. All are welcome. Alan has requested no flowers, but in lieu donations to St Anne's Hospice are appreciated.