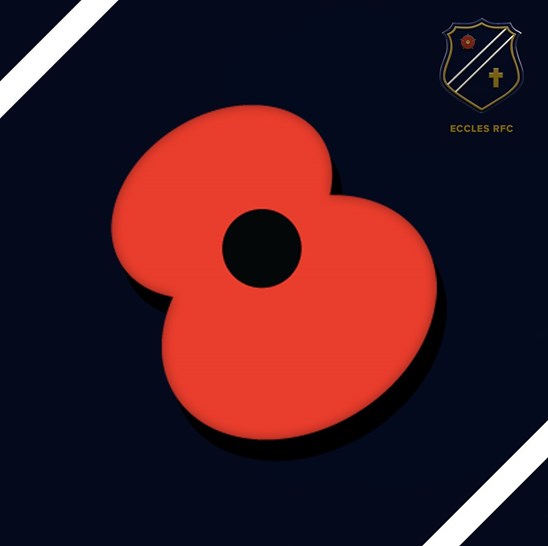 Traditionally, at 11am on the second Sunday of November the club ceases its activities to observe 2 minutes of silence to commemorate the sacrifice and contribution of British servicemen and women in the two World Wars and later conflicts.

This year, we'll be prevented from marking this act of rememberance on our pitches, but we can still be together in spirit and respect the tradition by observing 2-minutes of quite reflection at 11am, at home or wherever we are. Please join us.

In the 1913/14 season Eccles RFC enjoyed home gates of over 3,000 supporters and an impressive record of W17 D6 L3 (just one home defeat to Broughton Park by a single drop goal to nil) with a fine team including Lancashire county players forward Harold Bowker and Half-Back Reginald Lightbrown Bolton.

Following the declaration of War, rugby fixtures for the new season were abandoned in September 1914. ‘Pals’ battalions were raised to encourage work colleagues and team mates to serve together and many Eccles players were amongst the first to enlist. Many of them would never return home to their families or play again.

Reginald Bolton, born in Barton, educated at Monmouth School and Manchester University was a partner in his father’s cotton shipping company. In September 1914, aged 26, just 3 months married, he enlisted into the 1/6th Bn Manchester Regiment. Commissioned March 1915, he rose to the rank of Captain in the 2/7th Manchester Regiment. On 3rd August 1918, he was killed at sea, when the hospital ship ‘Warilda' carrying him home was torpedoed by a U-boat. He was 30 years old. News of his death was published in the New York Times. In a local newspaper, an appreciation of Capt. Bolton was given in this letter“Everyone with whom he came into contact with could not but be impressed with the nobility of his nature. He had, combined with great strength of character, a depth of feeling and sincere sympathy fo anyone in trouble. When home on leave he always arranged to meet the mothers and wives of those in his company who had fallen to tell how their loved ones had met their end. It is needless to mention the courage required to go through such an ordeal. He was not one to shrink from such a duty, however painful. The keynote of his whole life was ‘Duty’ to which he responded with every fibre of his being. It has been said by one in his company that there was not one of them to a man who would not willingly have laid down his own life for his captain.”

John (Jack) Bolton, brother of Reggie, also educated at Monmouth school, was a forward and goal kicker for the Eccles 1XV. He scored 2 tries, 20 conversions, 8 penalties, 2 drop kicks in 1913/14 season. He enlisted in 9th Bn Lancashire Fusiliers, saw action in France and died of shell blast wounds 3rd October 1917. HIs death was reported with these words “Well known throughout Lancashire as a rugby footballer, a man who always played the game and put the last ounce of effort into it. He was a fine forward and won a reputation as a goal kicker. He was well known outside of Eccles in that respect. But the young men and their friends who kept Rugby Union football alive at Barton for so many years will ever remember the strength of Jack Bolton and the will to win with which he always inspired in his comrades.”

Frederick Alexander Murdoch. Eccles Forward, played 21 games in 1913/14. A committed scholar and athlete, Murdock was raised in Flixton and studied at St. Johns College York, where he rowed for the college and was captain of the Harriers running club. He lived on Peel Green Road and was a teacher at Lewis Street School Patricroft when, in September 1914, aged 24, he enlisted as Private in the Royal Fusiliers (Public Schools Battalion). Amongst the recruits were enough former international players to field two rugby union teams. Pte. Murdoch crossed to France in November 1915 and saw action on the Somme at Albert, Bazentin and High Wood in July 1916. Murdock died of wounds, 24th July 1916, aged 25. In reporting his death a local newspaper noted “A very promising career has been cut short by the death in action of Pte. F.A. Murdoch of the Royal Fusiliers (public schools battalion). Pte. Murdoch had the distinction, it is believed, of being the first teacher under the Eccles Education Authority to enlist on the outbreak of war, and to him also must now be accorded the honour of having been the first to die in the service of his country.”

Ernest Bateson. Eccles wing three-quarters and ’A' team captain, scored 9 tries in 1913/14. Also a cricketer for Eccles. Lived in Trafford Park and worked as an Analytical Chemist for Taylor Bros Ltd. Enlisted as soon as war broke, August 1914. As Private 1/6th Bn Manchester Regiment (T.F.) he sailed from Southhampton on the Caledonia arriving in Alexandria, Egypt on 25th September 1914 and formed part of the 42nd (East Lancs) Division. On 6th May 1915, to reinforce British beachheads on the Gallipoli peninsula, they landed at Cape Helles, Dardanelles, in a dawn assault. The Battle of Krithia was a futile offensive for a vineyard occupying high ground, with the Manchesters suffering heavy losses. On 4th June 1915, the British advanced their front line during the night, to place themselves within striking distance of the Ottoman front line. Bateson was involved in a bayonet charge but was killed whilst attempting to hold a captured trench. He was 25 years old. A letter home from a comrade gave an eye witness account of his death “We had an enormous charge, captured three trenches and Earnest was one of the first all the way forward on our front. When we got to the final trench, or rather beyond it as a few of us went too far, he said to me in the midst of shrapnel and bullets: ‘I wouldn’t miss this for anything’. He looked like he had scored a try at Rugby! This was his spirit throughout - fearless. Earnest and I were put on guard over the second trench which was unoccupied. At night time the enemy counter-attacked. Earnest shouted ‘Halt. Who goes there?” They answered in English ‘Friend’ ; then I heard them jabbering in an undertone. I knew then who they were. Earnest was shot; went down like a hero without a murmur. The man who shot him I shot through the head, as dead as a log, also two more. I had my brother killed. Nearly everybody who took part is killed or wounded. Everyone who knew ‘Batey’ knew the only part he could play in any game - war or otherwise. I am writing on behalf of the few left and trust it will strengthen you in your thoughts to know how bravely he acted to the last”.

Several Eccles teammates enlisted in the same Battalion together.

Charles Percy Wild. Eccles ‘A' team vice captain 1913/14. Enlisted August 1914, Private 1/6th Manchester Regiment (T.F.). Killed 7th August 1915, Battle of Krithia Vineyard, Dardanelles. British casualties on this day alone were 3,469. After having been reported as ‘missing in action’, Mr Wild’s parents later received a letter stating their son’s body was found 15th November and buried. Two pages out of a notebook were also enclosed, the hand writing identified by Mr and Mrs Wild as that of their son, the last words being written just before he took part in the charge. He was 24 years old.

Robert Neville Rawlinson. Eccles 1XV, scored 4 tries and 1 drop goal in 1913/14. Before the war he was employed at Parrs Bank in Manchester and served as a Lance- Corporal in the Royal Welsh Fusiliers before being commissioned and attached as 2nd Lt. Lancashire Fusiliers. Wounded by shrapnel to his head, he returned to hospital in Liverpool. Unknown if he returned home.

Richard Henry Quine. Eccles 1XV and ‘A’ team; son of a local Doctor, on the outbreak of war, he enlisted as Private in the Royal Fusiliers (Public Schools Battalion) and survived the Battle of the Somme, before taking a commission. As a 2nd Lt. 5th Bn Northumberland Fusiliers (POW) he was captured during a German offensive at Aisne, June 1918. Unknown if he returned home.

Thomas L. Whitehead. Eccles Forward and Club Captain 1910-1914. Played 24 games for the 1st Team in 1913/14, scoring 4 tries and 5 goals. Eldest son of a sales agent, lived in Pendlebury and was nearly 30 years old when he volunteered in September 1914. As a Private 2/8th Bn Manchester Regiment (POW) he was retained on home duties until March 1917 when he went to France and was involved in fighting at Ypres, St Quentin and La Motte where he was taken prisoner by the enemy. He was released after the Armistice 1918, returned home February 1919.

Harold Bowker. Renowned Lancashire and Eccles forward, enlisted as a Private the Duke of Lancaster's Own Yeomanry, aged 26. In a letter home from France in December 1915 he wrote “We are often under shell-fire. I can say I’ve been in some hellish hot places. I get about with the Colonel a good deal, he’s one of the right sort and we have got right in it a few times, twice within the last fortnight.We got right amongst the reserve trenches when the colonel told me to stop with the horses and he would go on on foot. The Germans began firing. It’s an awful sensation I can tell you to hear those shells whistling all about. At least six places were dished in within 100 yards of where I stood, and shell after shell came over the barn against which I was standing with the horses. One hit the stable right opposite to me, it blew a horse clean in two and blew the stable up. I had a look at it and then paced it off. They sent about 80-100 shells altogether. An officer told me I had better clear out and get in a field close by and I wasn’t slow I can tell you. I am pleased to say that I am still quite safe and sound and shall be looking forward to a game of football on Saturday. The trouble will be getting two teams. I expect by Saturday there will be about 50 a side. We shall have to have a number of games.”  Pte. Bowker transferred to The Loyal North Lancashire Regiment; commissioned January 1916 and became 2nd Lt. in the Royal Flying Corps, taking his Aviator’s qualification in a Maurice Farman Biplane at the Military School, Brooklands, 20th October 1916. He survived the shelling of the Somme and returned home, going on to play for Swinton Lions until 1920.

In 2017 the Eccles RFC DofE Gold Award Group embarked on an expedition to the Somme and made a film (below) as a tribute to all the Eccles players who served in WW1 and a salute to those who returned to rebuild this club.

Of all the notable contributions one in particular perhaps deserves a special mention.

Norman Shaw was born in Salford and within months of leaving Manchester Grammar School in 1915, enlisted as a Private in the Seaforth Highlanders, in cahoots with his school pal Edward Martin, with both boys lying about their age of 17. They saw front line action on the Somme and Teddy was killed by a sniper in December 1917. Norman survived the war to play for Eccles RFC in the 1920s, serving as club Treasurer 1926-1937 and as club President 1935-1939 and returning to his post 1946-1958 after WW2.

If we remember them, they are not forgotten. 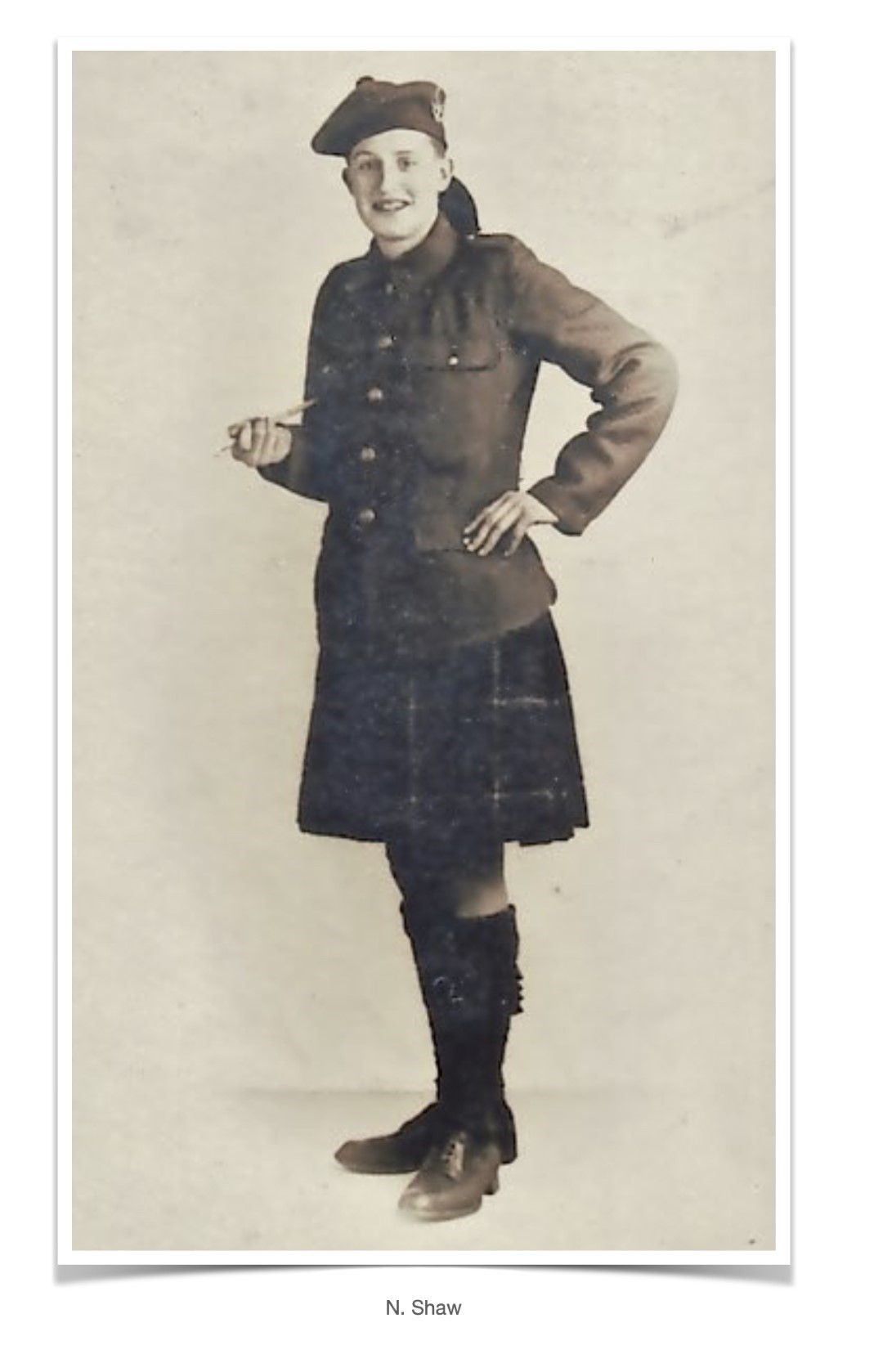