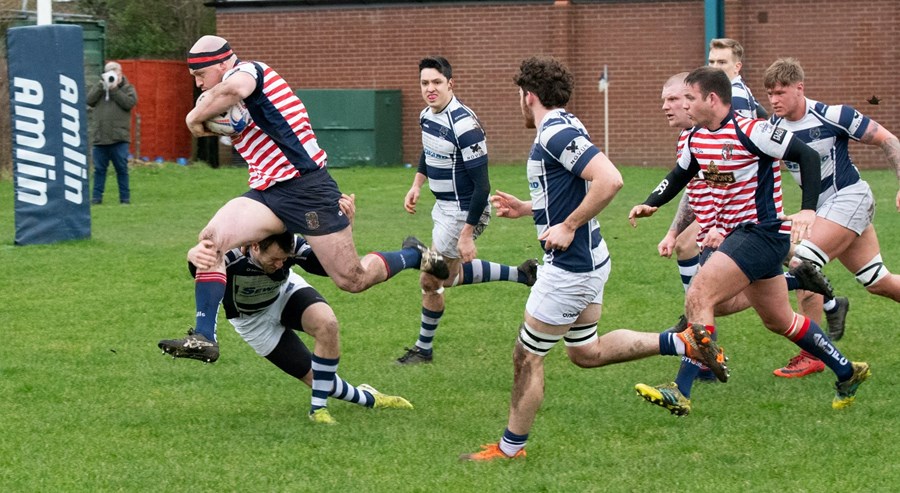 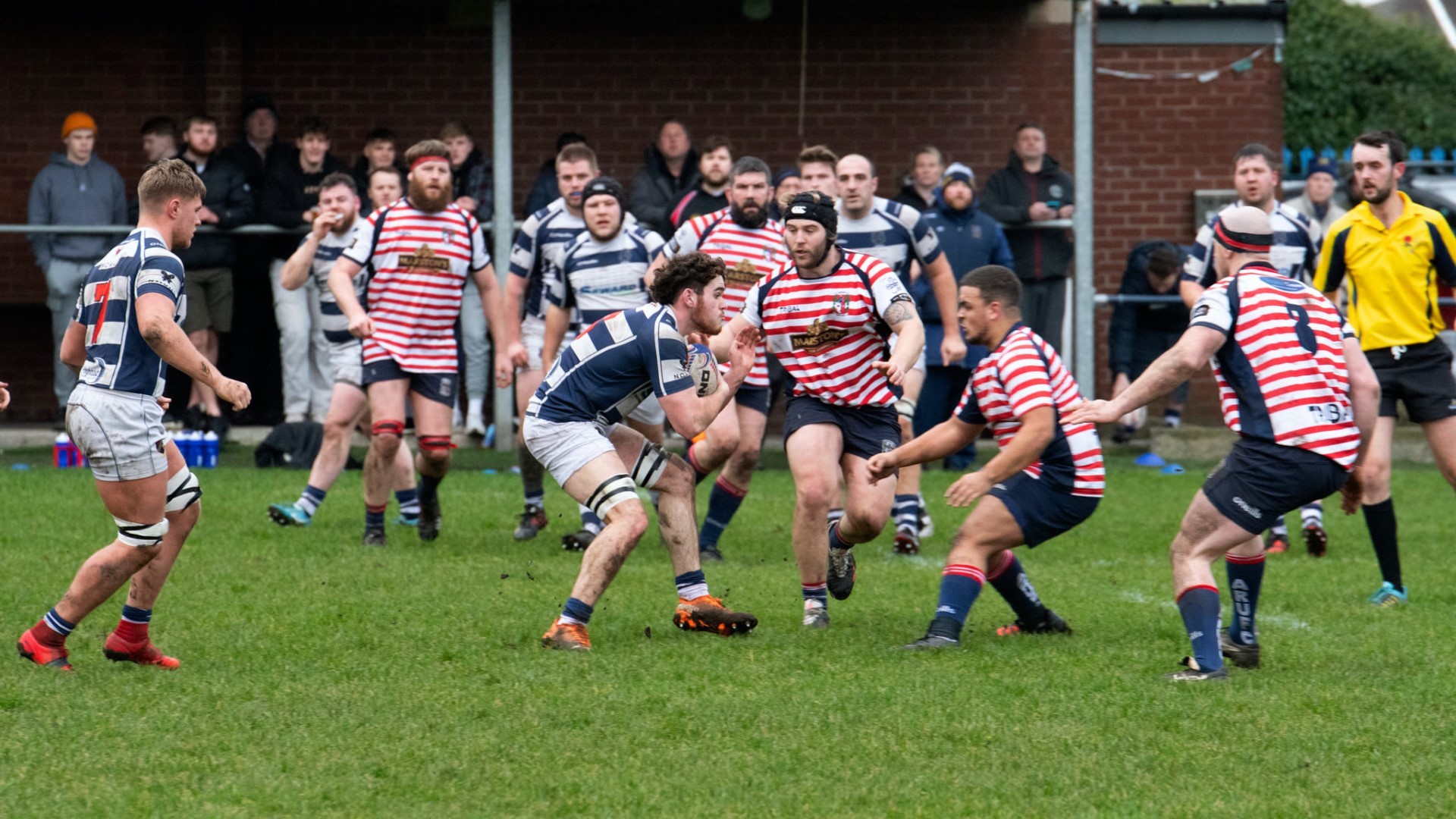 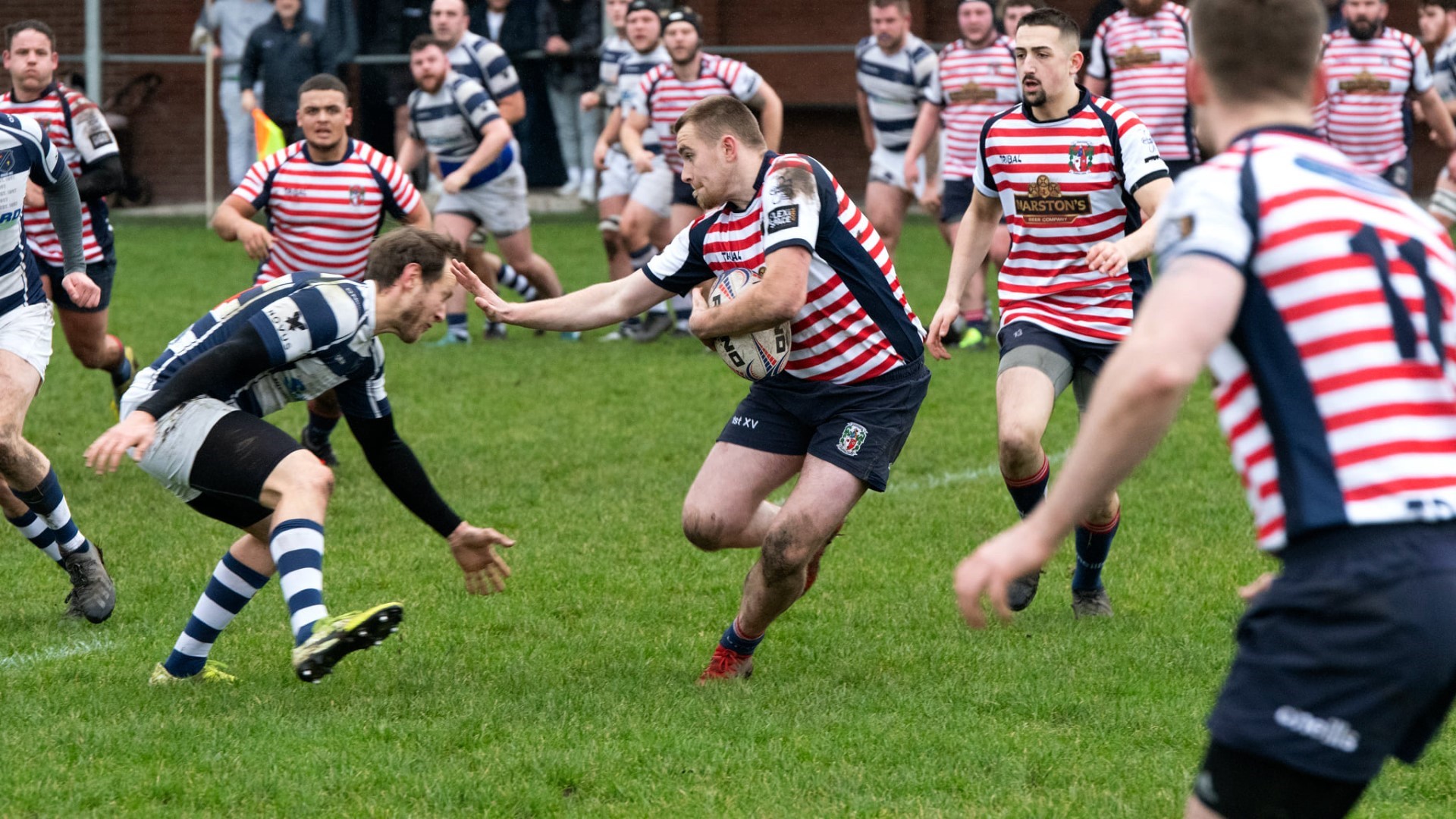 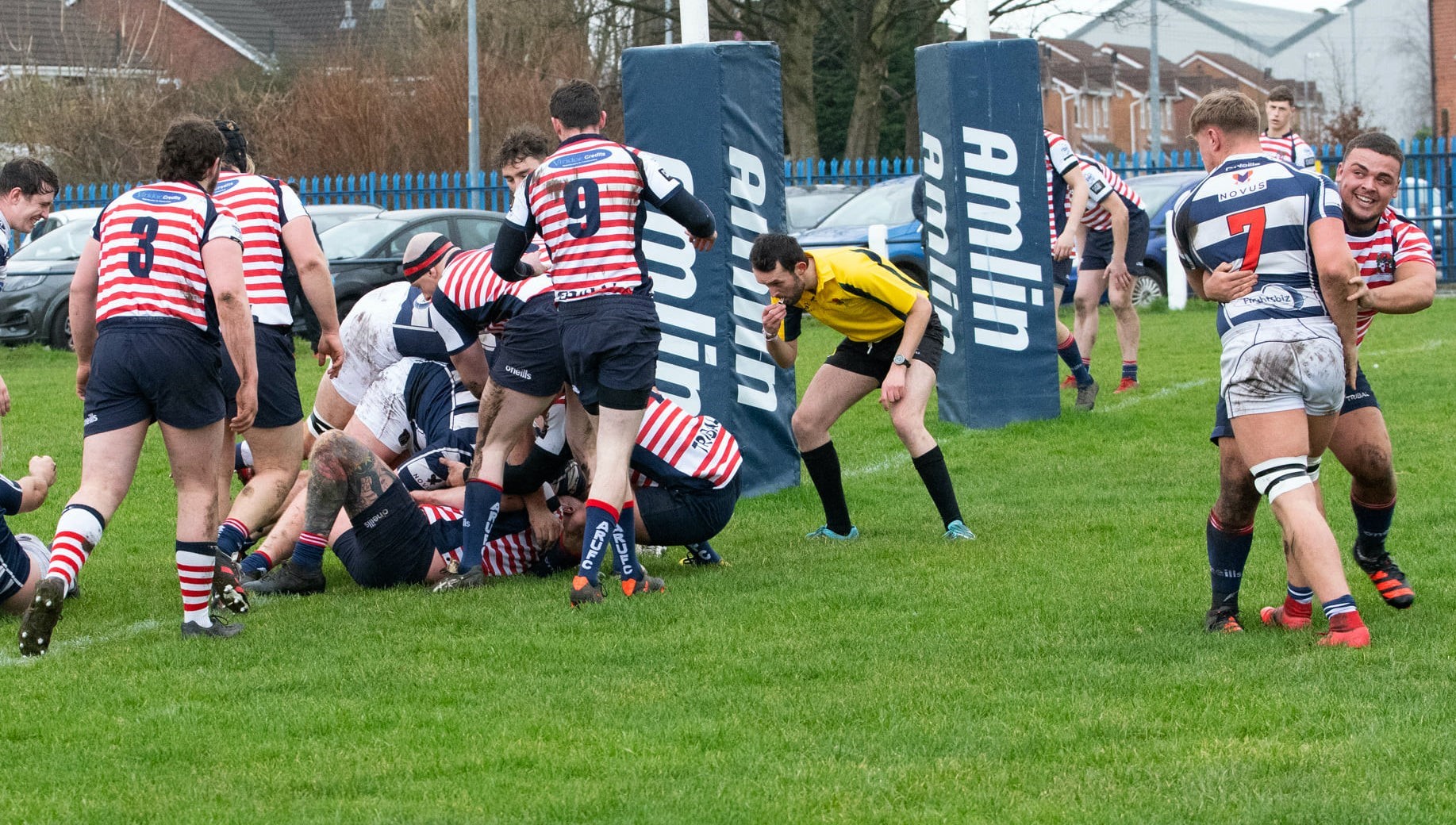 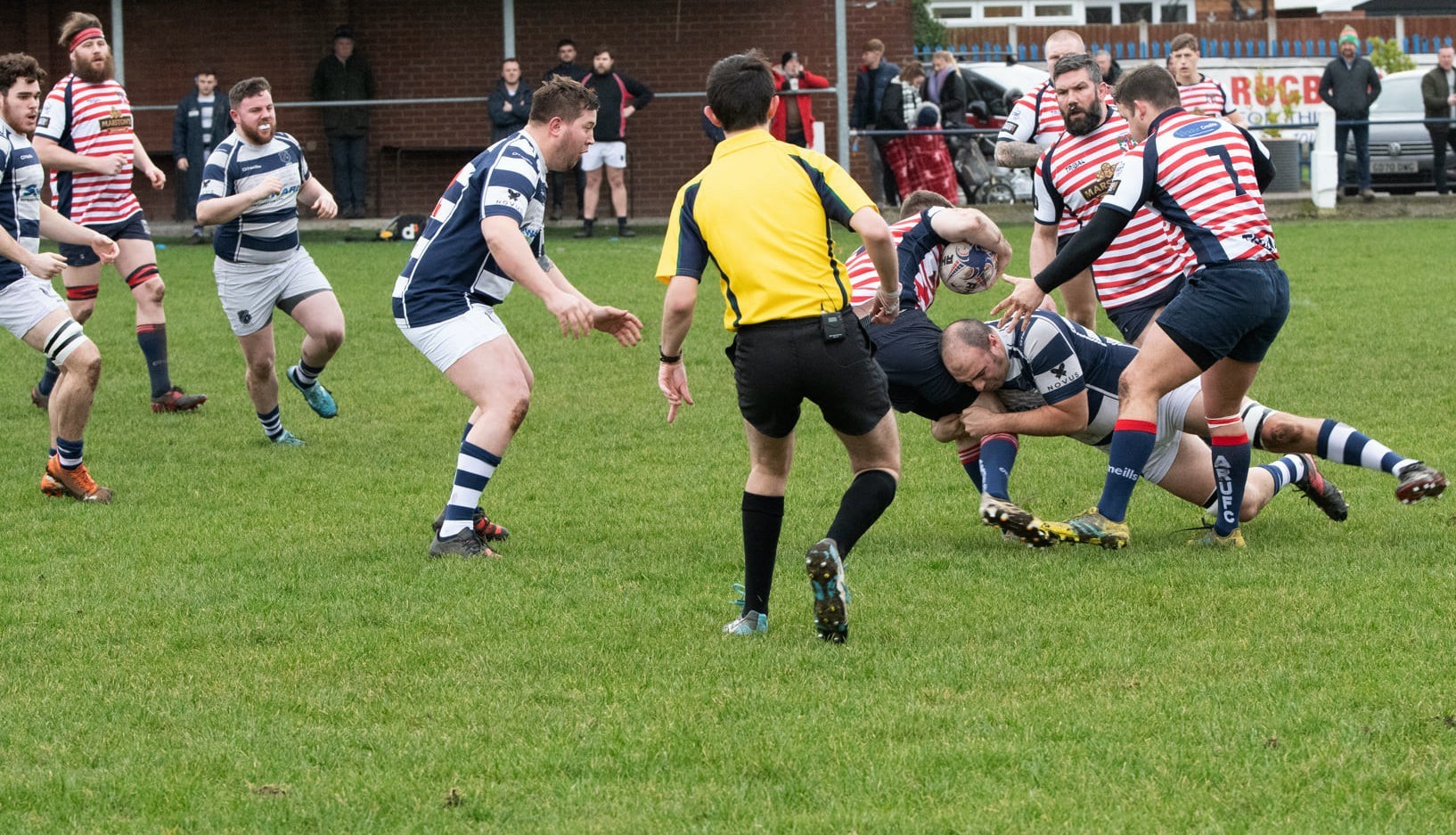 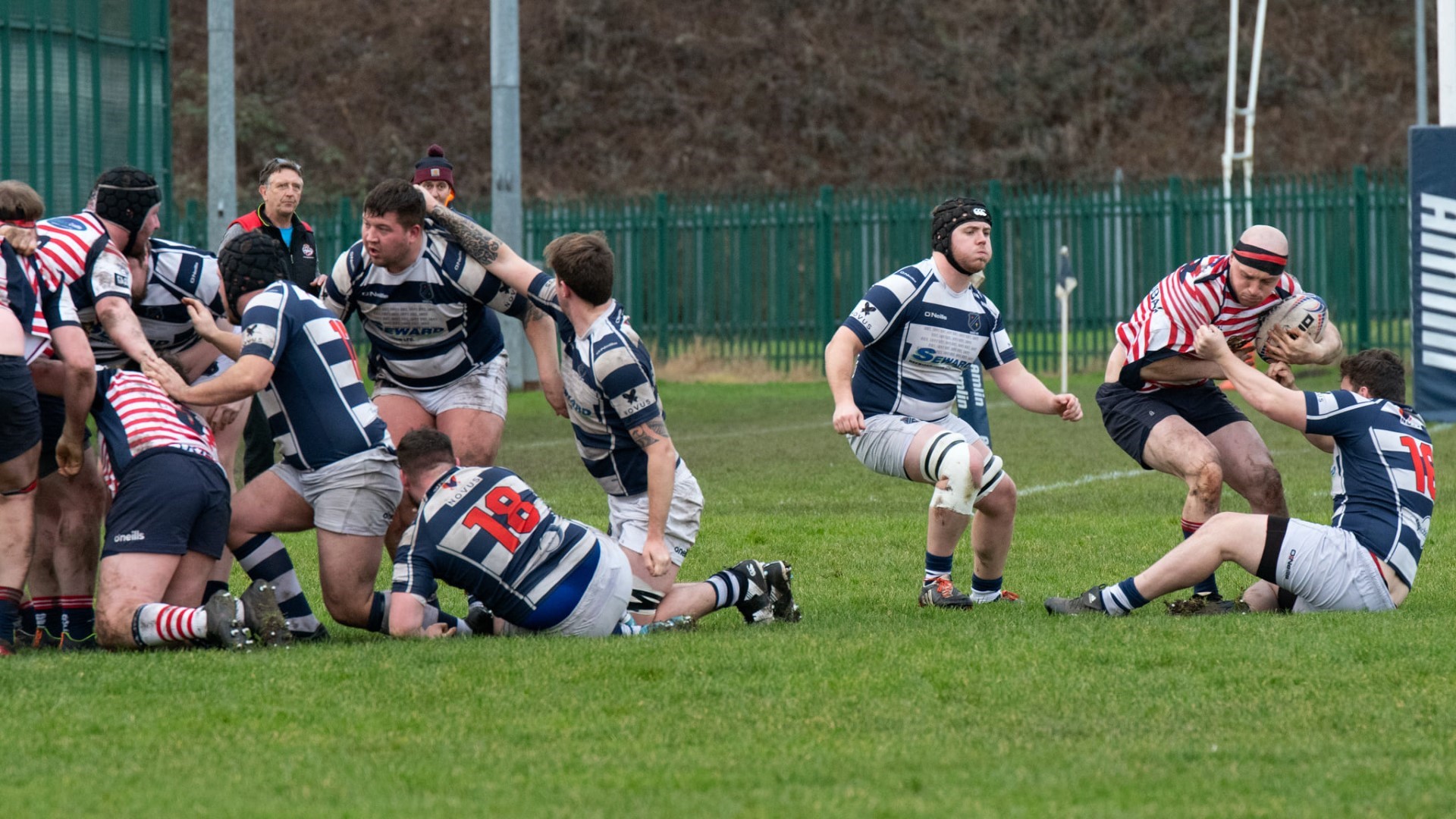 Eccles faced a new challenge this week with Old Brodleians making the trip over the Pennines from Halifax to face an Eccles side hoping to return to winning ways after last week's disappointment, in what promised to be a stern test for the Gorton Street side.

Eccles got the game underway with a smart kick from Sam Dixon who spotted a gap on the left and his short kick was well read by Scott who was first to the ball but just failed to gather it cleanly to give Old Brods the scrum on their own 35 metre line. The Eccles scrum looked to dominate early on, and continued to have the advantage throughout the game, although the away side secured possession but were met with fierce tackling from Matt H , Jack C and Matt G as both sides tested each other early on with Scott then winning a penalty in defence.

Eccles won the line out on half way and moved the ball out wide and won another penalty for offside to give them another lineout in Old Brods half which Eccles won again. Cael took the ball in well and set it back for Joe to test the visitor's backline with an early kick which Old Brods failed to deal with and knocked on and when the ball found its way out to Lucas the visitors found him too strong and he again won the penalty. Jack accepted the points on offer to put Eccles ahead at 3- 0.

Old Brods restarted and Harry P took the ball well and charged forwards but Eccles were penalised this time for not releasing when the ball squirmed loose and Cael threw himself amongst the flying boots to re-gather the ball. It was the visitors time to put pressure on the defence now and back to back penalties gifted the visitors and early try when they tapped the penalty quickly and scored to the left of the posts but failed to add the extras making the score 3-5.

Eccles got the game going again and more defense from Josh , Matt G and Jack L kept Old Brods at bay and Eccles won a penalty for offside following another probing kick from Joe. Eccles failed to find touch from the penalty but soon trapped the ball carrier and managed to secure another penalty for not releasing but poor handling from the lineout meant Eccles knocked on. The first half was a really tight affair but Eccles lost Evan early on following a good kick chase and Old Brods seemed content to play the game in Eccles half with Leighton returning the ball well whenever he was called into action.

The Eccles pack were dominant and won scrums against the head but more sloppy handling in contact meant these opportunities went nowhere and it was Old Brods who had the last chance to score in the first half but the Eccles captain Matt H chased the centre down and forced the penalty for not releasing. The first half ended with Cael struggling with an injury when his shoulder got trapped in the tackle and hyperextended but Dr D soon mended his fellow prop. HT 3-5.

Old Brods started the second half with a kick to Harry G who took the ball well and was backed up by a good drive by Abe with Joe again kicking early to turn the visitors back line around. When they conceded a penalty Eccles had the opportunity to progress but a replication of the ruck offiside errors from last week give Old Brods more easy yards out of defence.

Eccles were contributing to their own downfall with more penalties and loose handling which again put the home side on the back foot, this was compounded with a penalty for a high tackle and gave Old Brods the line out on Eccles 10 metre line. The away side knocked on from the throw and were then adjudged offside, so Eccles had the chance to clear but managed to knock on from the scrum on their own try line giving the visitors a gilt edged chance infront of the posts to score and they happily obliged, with the number 10 stepping over to extend the lead to 3-10.

Eccles kicked to touch from the restart. Old Brods had the line out on their 40 metre line and immediately swept the ball out wide but good defence from Josh and Chayse kept the attack at bay although more poor ball retention meant Eccles kept gifting the ball back to their opponents and when we Eccles did have possession they were guilty of a forward pass or more offsides at the breakdown although Matt H was still a constant thorn in the visitors side at the line outs by winning more than his fair share.

Eccles had the ball from a line out following a penalty and Leighton sent a kick deep into the Old Brods half but the Eccles chase overshot the visitor's defence and left the Old Brods winger with a clear run down the touchline with the cover defence stopping the winger just short but the support players crashed over to move the score to 3-17 with Chayse the latest injury when he sustained concussion and was replaced.

Eccles were up against it now and despite the effort from Jack L who carried strongly again, Eccles could not breach the Old Brods line and the game ended on a real sour note with Jack L getting a really bad bang to the head. Suffering from concussion Jack was able to leave the pitch under his own steam as the referee blew for full time.

Another frustrating match where Eccles contributed to back to back losses for the first time this season and with more tough games coming up they need to learn quickly and cut out the unforced handling errors and easy penalties with players offside from the rucks – a game next Sunday against a historically strong Littleborough side will see if the lads have learnt their lessons. FT 3-17. 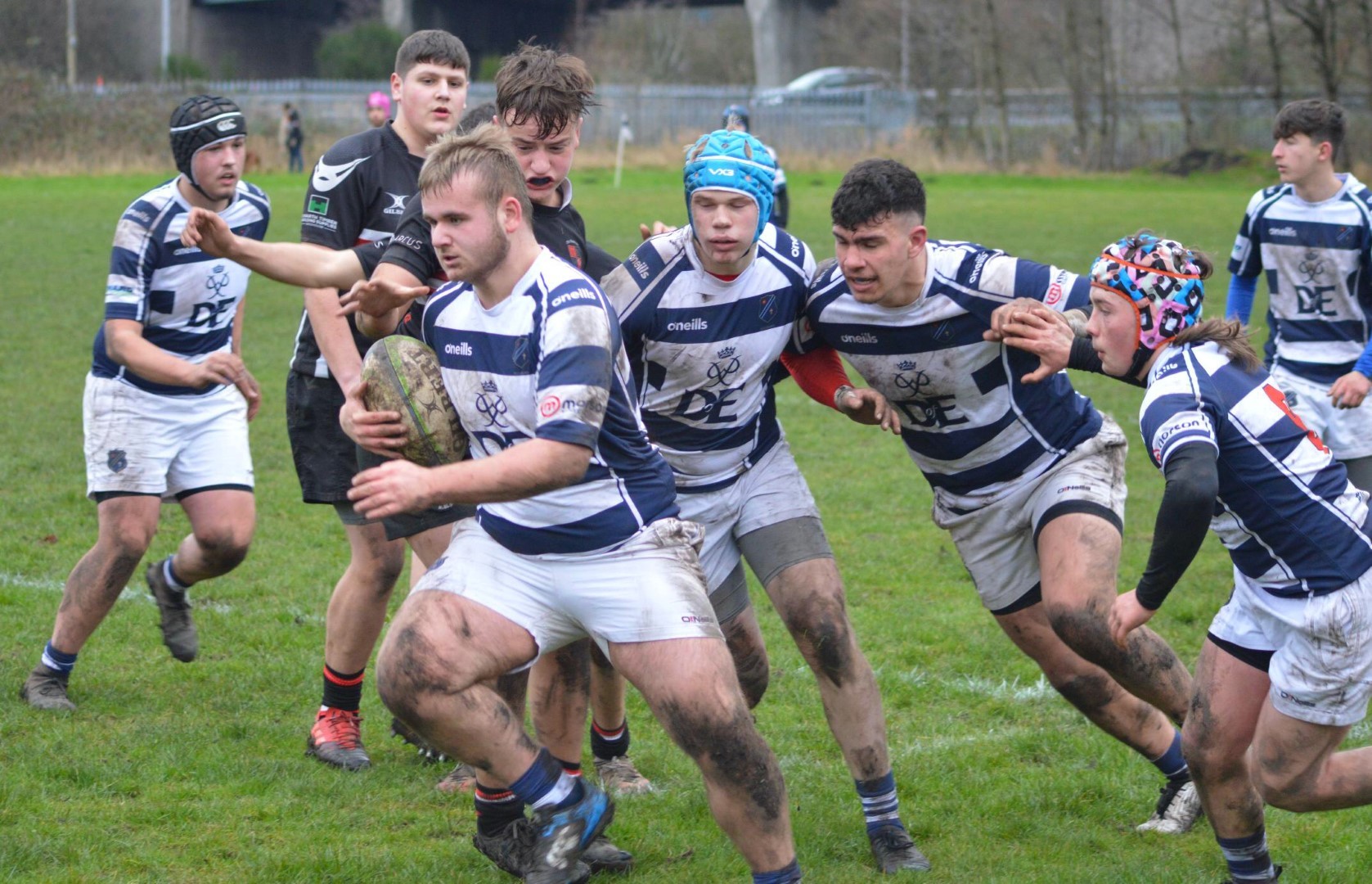 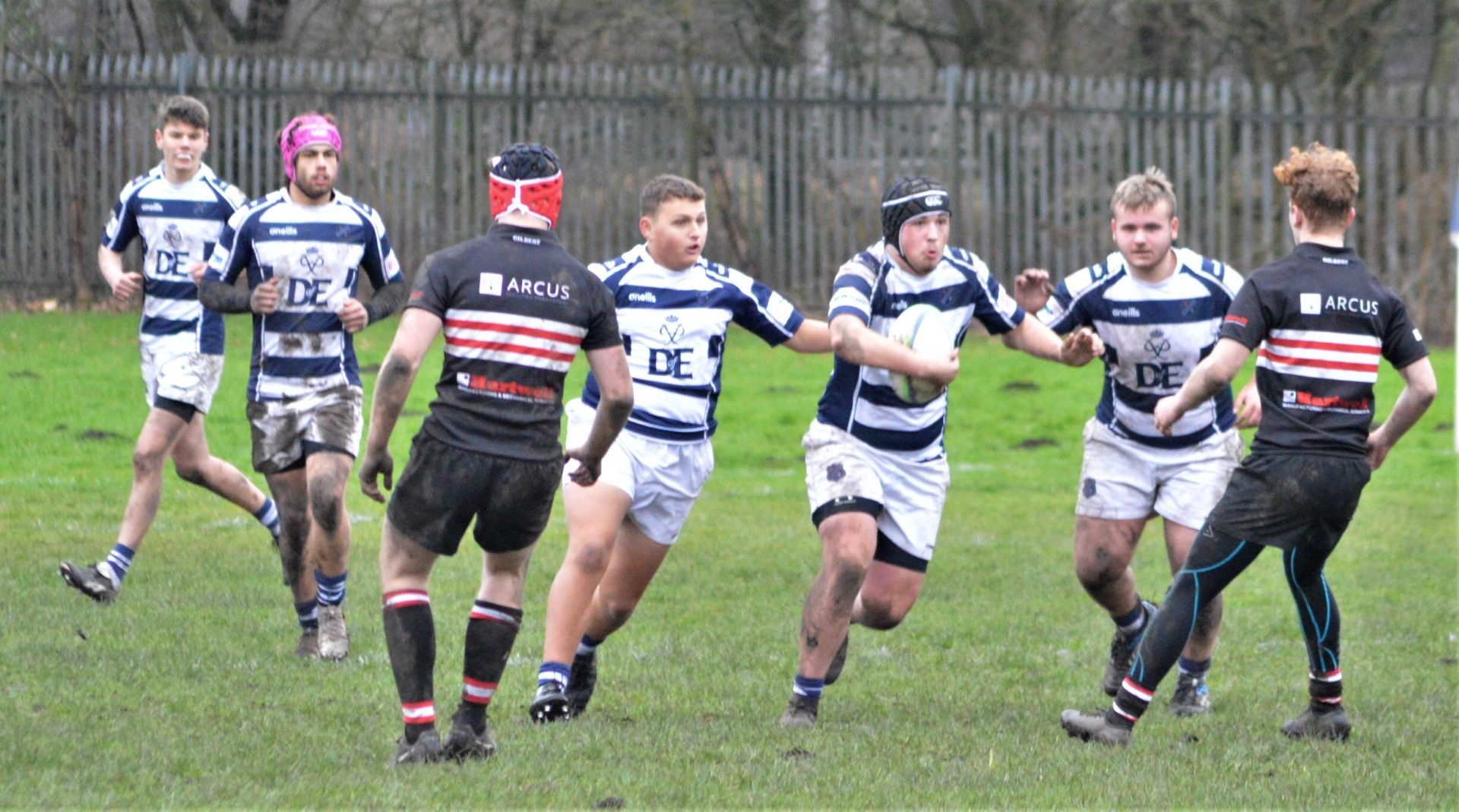 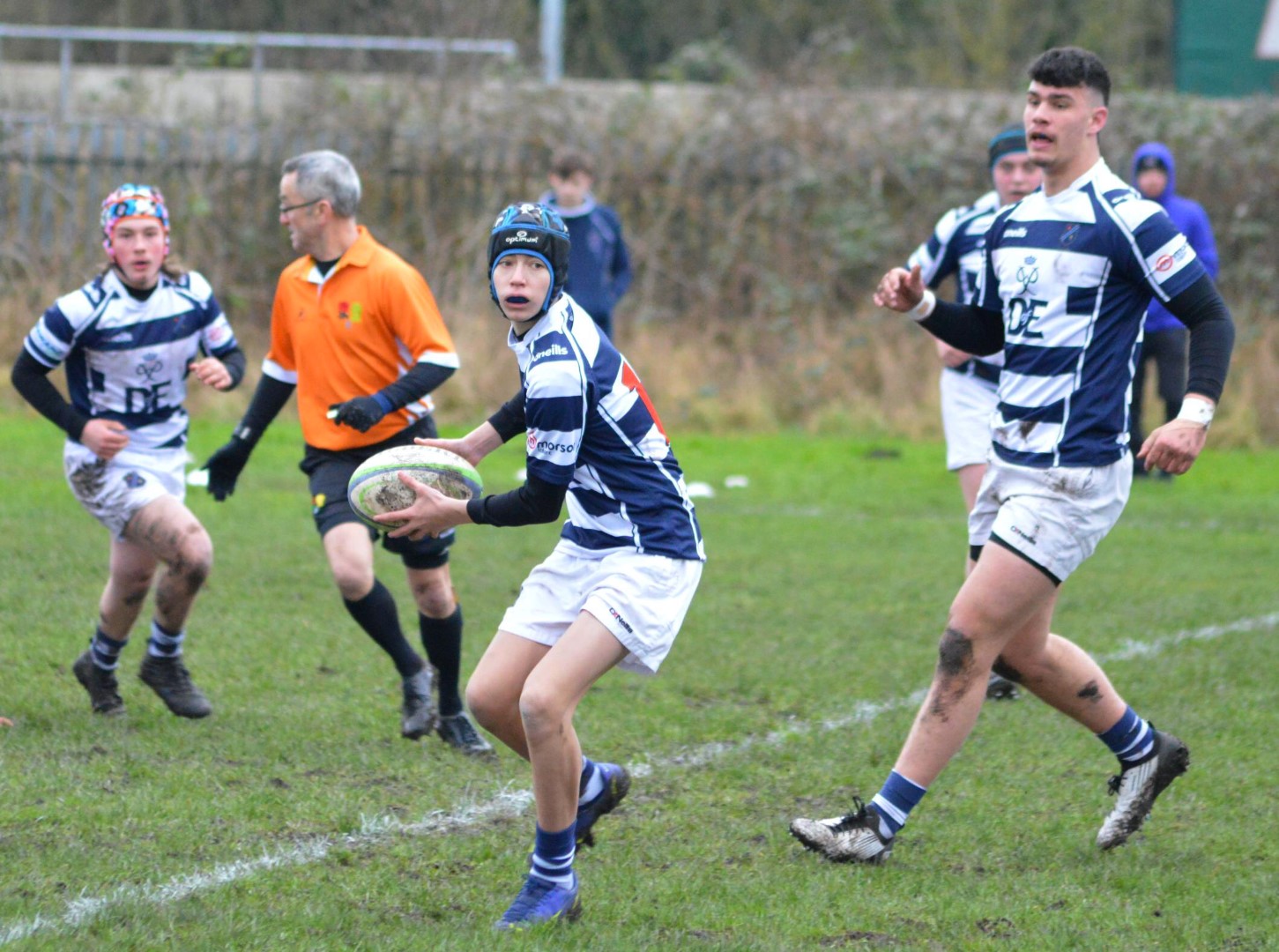 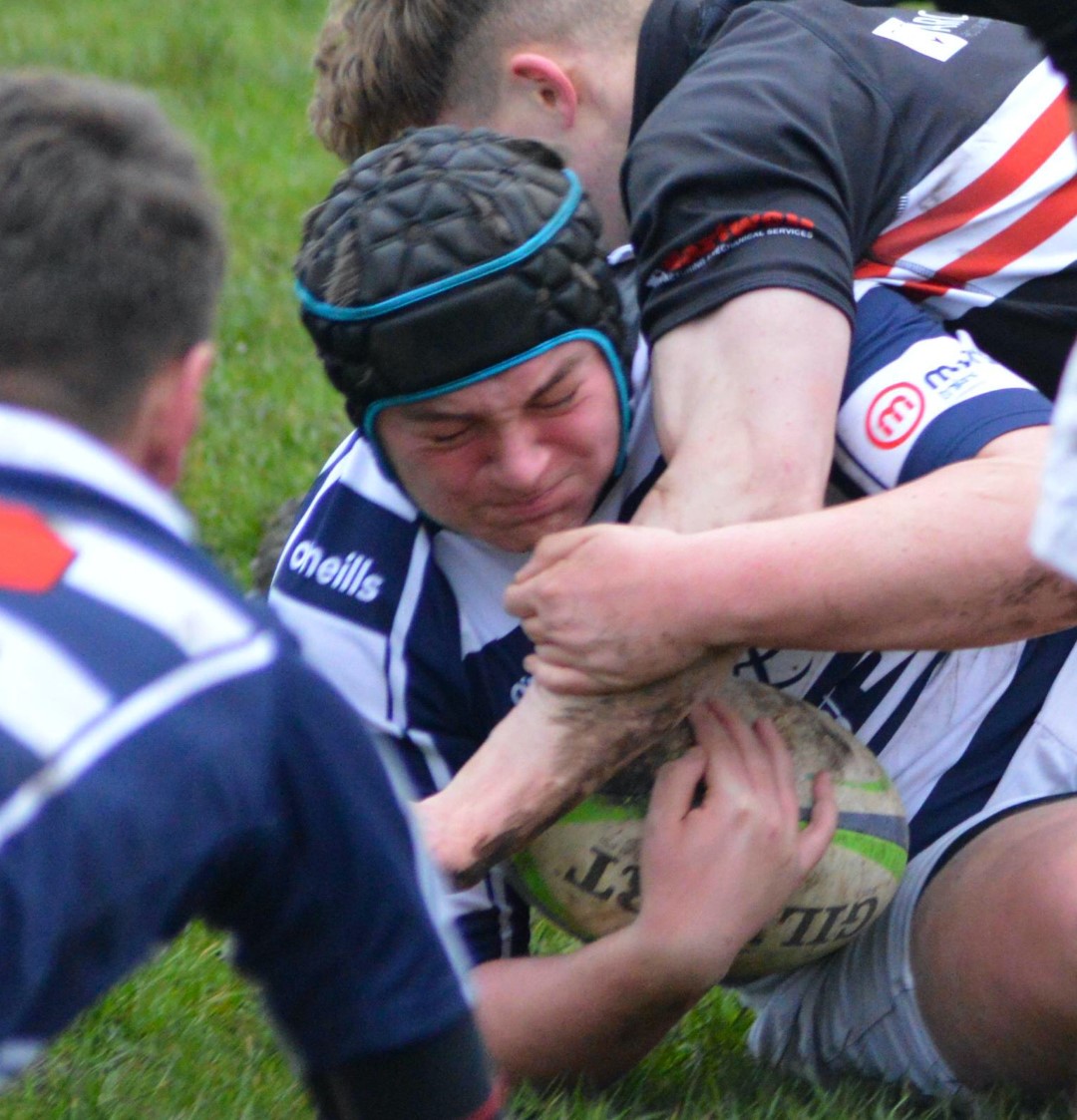 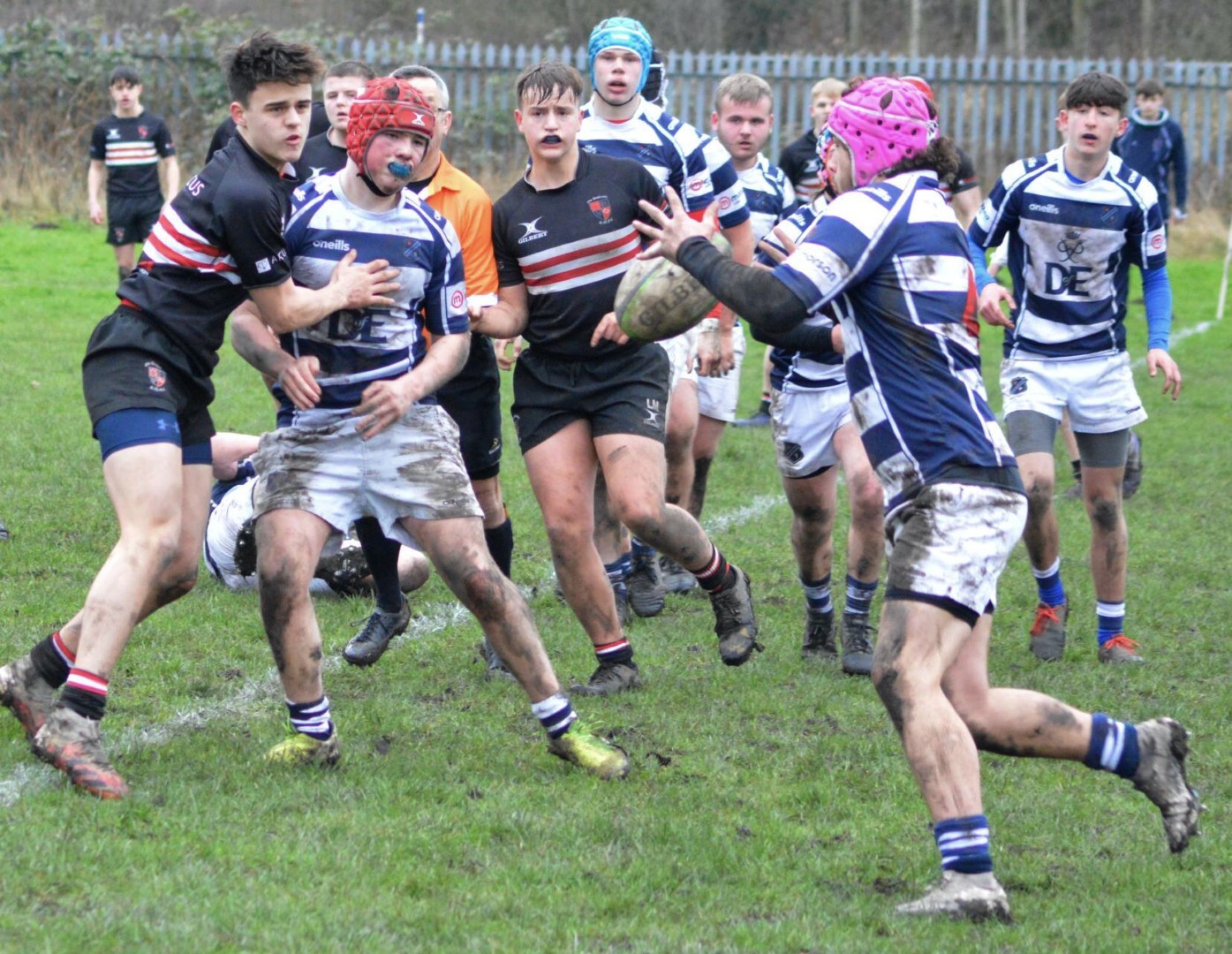 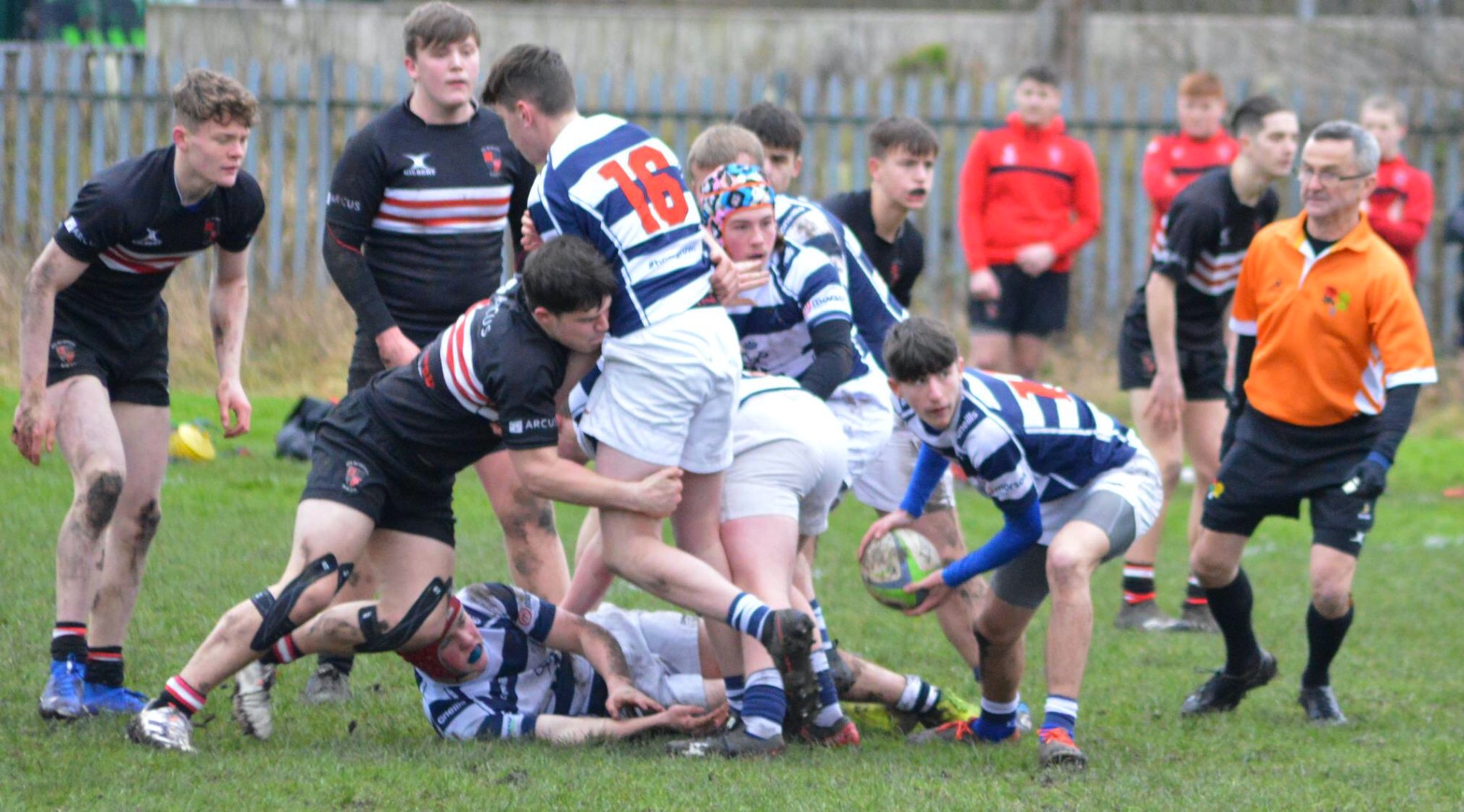 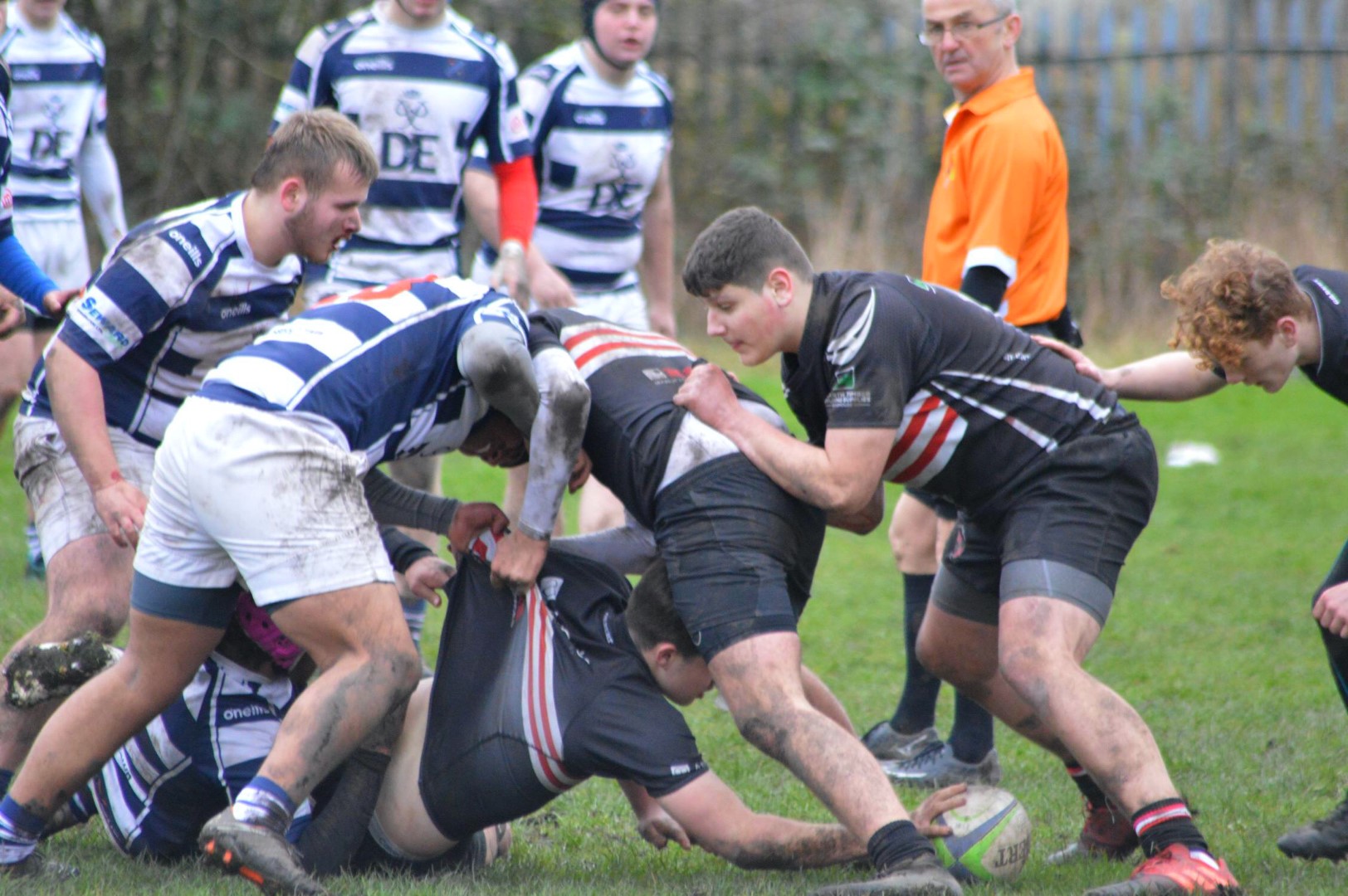 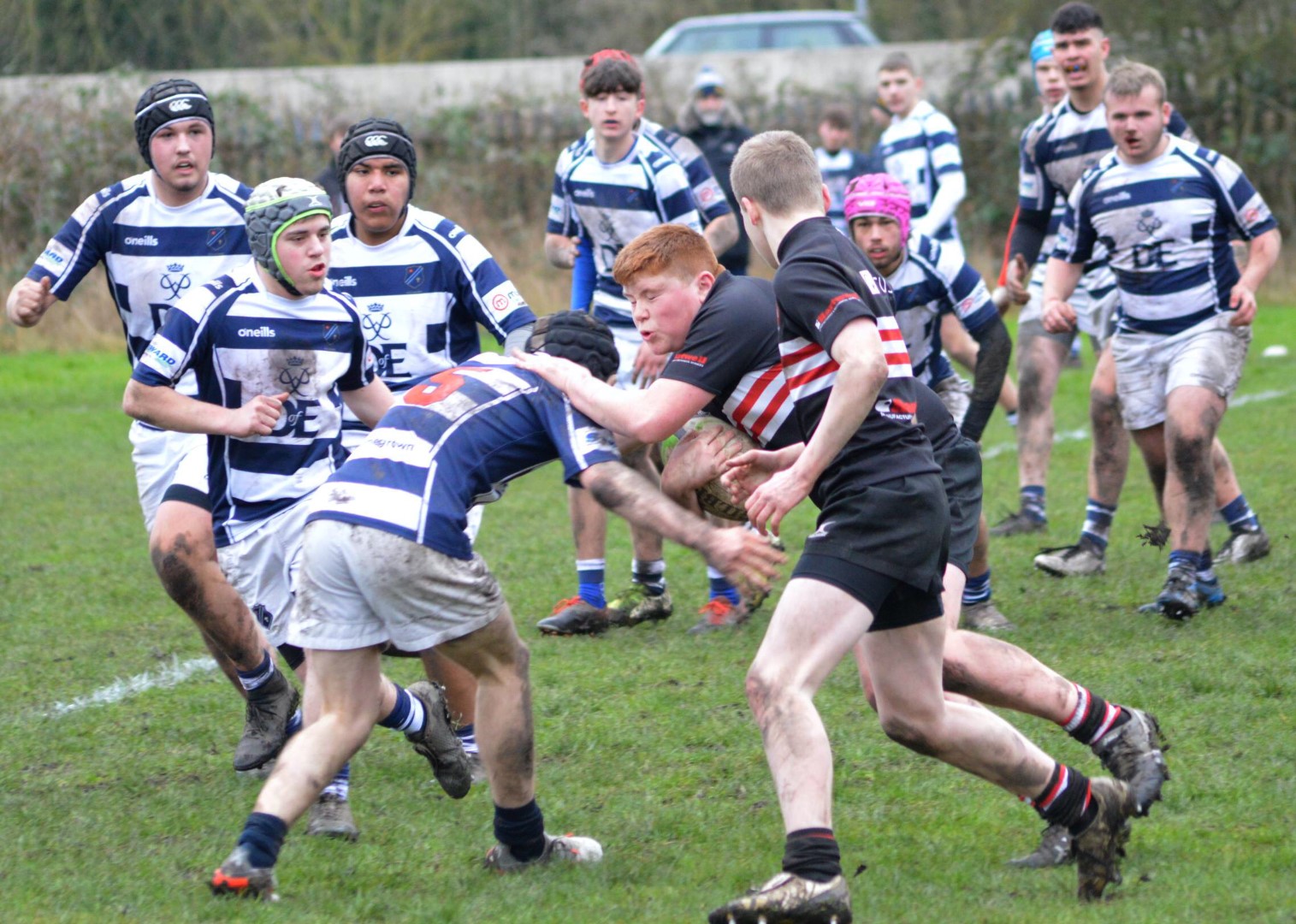 Sunday's game against Old Bedians? Where to start?!  Following the previous week's brilliant 9-2 Lancs Waterfall Cup victory against Garstang the boys should have been rolling into this weeks match with confidence and gusto.

We were missing some key players due to illness and injury but we were still able to field a strong squad. Bedians hadn't played a game for 5 weeks nor the new U13 regs so the logical (and fair) thing to do was to lend a few players to Bedians to balance it out. Bedians coach Steve kindly offered to ref the game with our team Ref Kris, away working nights.

The pre-match team talk reminded the team of the TREDS values and what kind of a match to expect. And this is perhaps where we got off to a bad start. Bedians came out battling and we were on our back foot for the majority of the first half. Slow to the ruck, bunched up, extremely poor tackling from some of our players and very little fire in our bellies.

Bedians took a few knocks from some hard tackles from Harrison and Eddie who as ever, led by example. This in turn spurred on Andre and Ollie who were true workhorses - putting in great displays of energy and effort with tackling and running with the ball.

Half time came and we were trailing 6-4.

Team talks with 13 year old boys can be a challenge and it took a combined effort from Adam, Vicky and Dan to get to the question of "do you want to win or lose today?"

The team have come along way and we pride ourselves on our inclusivity and supportive approach to the game but the coaches don't see the U13's as a 'development team' anymore as the lads have proven on a number of occasions they can compete with the best and we get some great feedback from opposition teams about our ability. What we need to encourage from the lads as a team, is desire and team spirit.

Thankfully, the second half was a different display.

We came out stronger and more determined and scored a brace of tries in quick succession. Harrison showing his trademark 'Juggernaut' delivery - straight through the middle of the opposition! Andre - his crazy, galloping runs but growing in strength week by week and Josh; lightning quick and seemingly able to run whatever the longest route is to the right hand try line!

Central to these tries were Eddie, Charlie, George and Ollie. Alongside his tackling and driving Captaincy, Eddie made a fantastic pass across two of our players to go direct to Josh on the wing who comfortably placed the ball down for a another try - simple yet effective. Charlie continues to grow every week and is always in the thick of it, giving 110%, if he continues to work on his tackling technique, he will be a formidable player. Ollie is also showing the benefits of playing rugby for his school and his ability has rocketed this season - his contribution in the centre of the pitch was pivotal this week. George too is now a key member of the team - our regular scrum-half and playmaker, his kicking is beginning to take shape.

A noticeable performance this week was Cian too - always has analysis and observations to give, this week his tackling was much improved and having made one crunching tackle in the second half, the adrenaline was clearly flowing as he scrambled after the ball and made another great tackle - keep it up Cian!

(Little) Ethan is also coming into his own - showing a natural ability at ball carrying, support play and tackling. He also showed great attitude when asked to play for the opposition and gave his Eccles team mates a scare when he made a darting run down the middle towards our try line, carrying the ball a considerable distance and taking more players than usual to stop him! Ethan was a great Ambassador for the team.

Our newer players Yas and Luke are also finding their feet in the match environment. Growing in confidence, their contribution gets better each week and if they work on fitness and tackling technique, they will become core members of the team - bringing strength and power to the squad.

From 6-4 down at half time, the game finished 12-6 to us. The bulk of the tries coming from Harrison, Andre and Josh.

A big thanks to Steve (Bedians Coach) for refereeing - he was also complimentary about our team performance whilst balanced in highlighting areas for individuals to work on - not an easy task whilst refereeing a bunch of hormonal thirteen-year-olds.

Areas for improvement for the team continue to be discipline and respect. It was good to see more 'grit' in the second half and this is something parents and coaches need to develop but manage in line with the TREDS principles. A few flash points from both sides were managed well by the referee and Adam quite rightly pointed out that the coaches, managers and referees are all volunteers, as are all the other club roles. Parents also give up valuable time to get the lads to the matches and training and it is important to remember this.

Ollie was therefore picked as our TREDS player of the week for his gutsy performance and hard work. Well done Ollie!

Special mention to Jim and Albert too who returned from league to boost the numbers. Some excellent runs from the pair, their contribution was fantastic and we hope they return.

Next week's game is against Knutsford who have very kindly offered to travel to us to fill a gap in our fixtures list (thanks Leeann for sorting). We hope to give them a good game and show what a great club Eccles is both on and off the pitch. 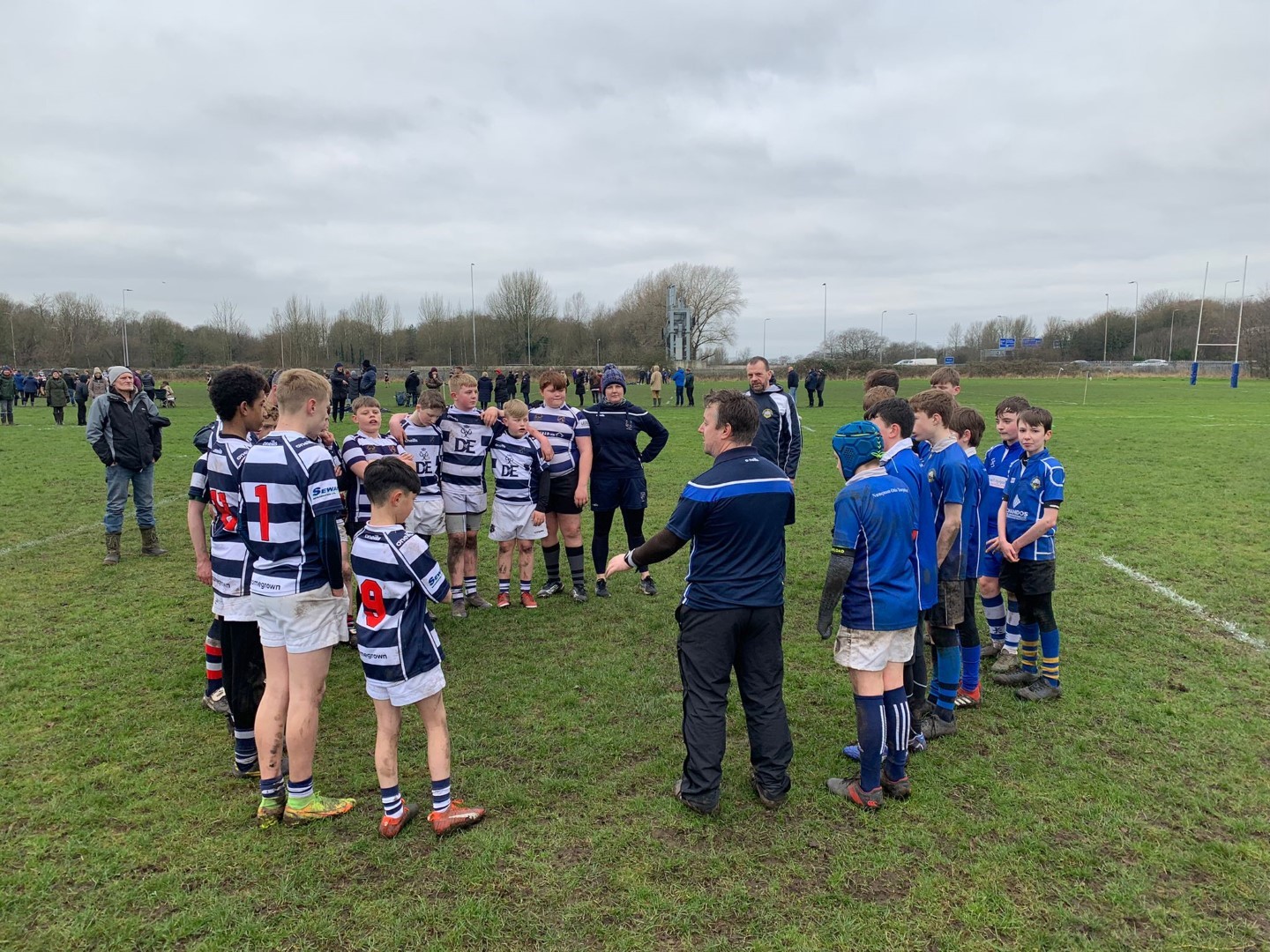 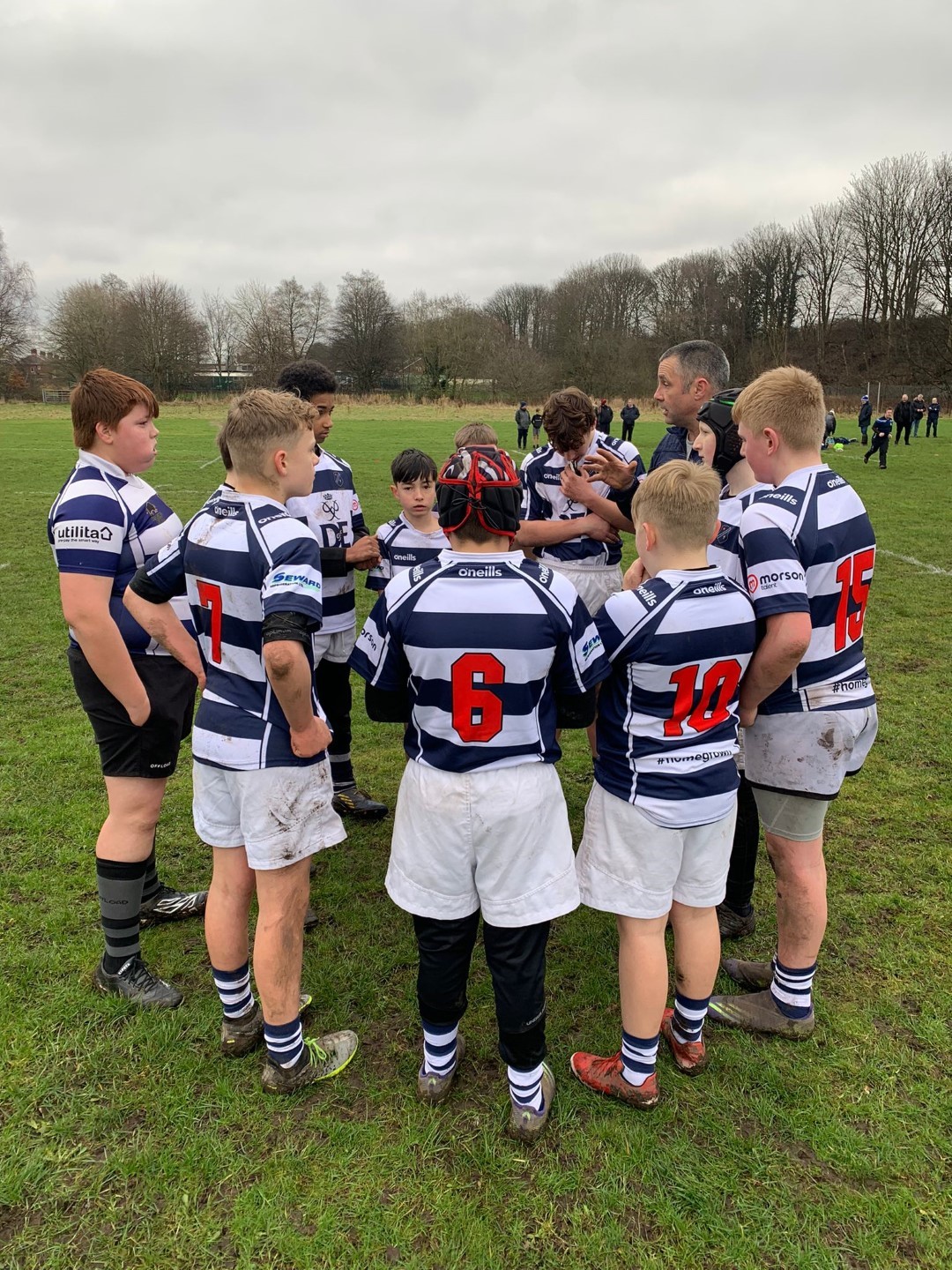