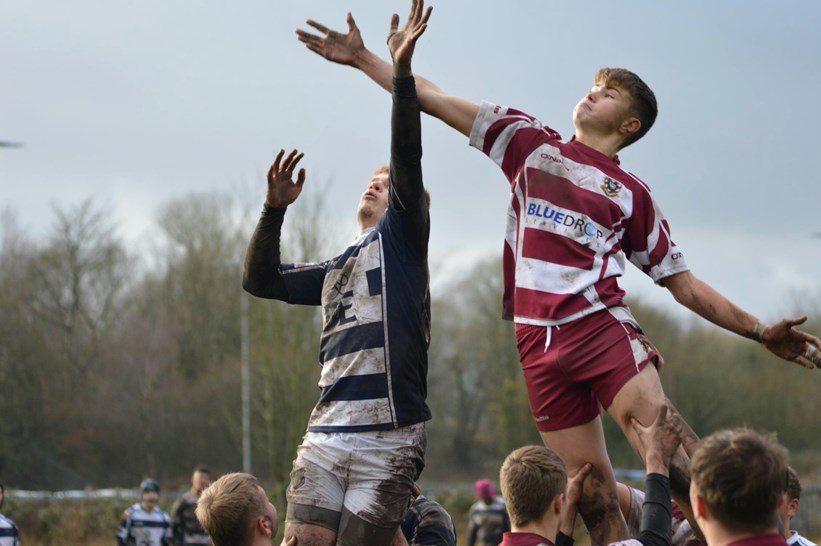 Despite the confusion of Kick Off time, which meant that some of the boys rolled out of their beds onto the pitch, Eccles Under 14’s gave an excellent account of themselves in a game in which they deserved at least a draw.

It was the last play of the game and the first time in the third period that Moor had ventured into the Eccles half, when Eccles lost the ball from a line out and Moor capitalised, and despite some excellent defence, crossed to snatch victory from the final play of the game.

Lack of numbers in the squad meant that Eccles only had 14 players. Heaton Moor very kindly made up the numbers so that the team could play their first 15 aside game. In a tight game it was the Eccles lads who adapted to the conditions the best and took the lead from an excellent try from Dom. The fast pick and go game allowed front row Adam to break the line and get in behind the Moor defence and an excellent offload to outside centre Dom, who despite the muddy conditions, showed a clean pair of heels to cross in the corner.

Because of Eccles make-shift front row, the scrum was under pressure and eventually lead to Moor taking advantage and scoring a try in the corner with Eccles on the back foot. 5 minutes later it was a case of Déjà vu with Moor crossing and ending the first period with a 10-5 lead.

The break gave the Eccles team time to get together and sort out a few of their minor issues and with some excellent tight play, they started to take control of the game. Their pressure eventually told with going through the phases, eventually allowing them to break through the Moor defence and front row Tom crossing in the corner to draw the game level.

Despite their lack of numbers, and Moor being able to rotate the team to keep with a squad of 22, it was the Eccles team who were on top both in terms of territory and possession in the final period. Coming so close to crossing the line and taking the lead on multiple occasions, with the last pass either going astray or being dropped. Unfortunately for the boys this was punished with the last play of the game and Moor snatched the game away, with some ruthless pick and go of their own, crossing in the corner to take the victory.

However, the lads can hold their heads high as it was an excellent effort. All 14 of the lads who turned out gave their all for the shirt and for that the club can be proud.

There is an excellent core group of lads in the team, but now they are playing 15 a side the small squad is taking its toll. Who knows, with more numbers of their own, the final outcome may well have been different. If your son is interested in joining a great bunch of boys please contact Sarah the team manager on 07834347788 and come down to U14 training which takes place Wednesday between 7pm and 8pm. 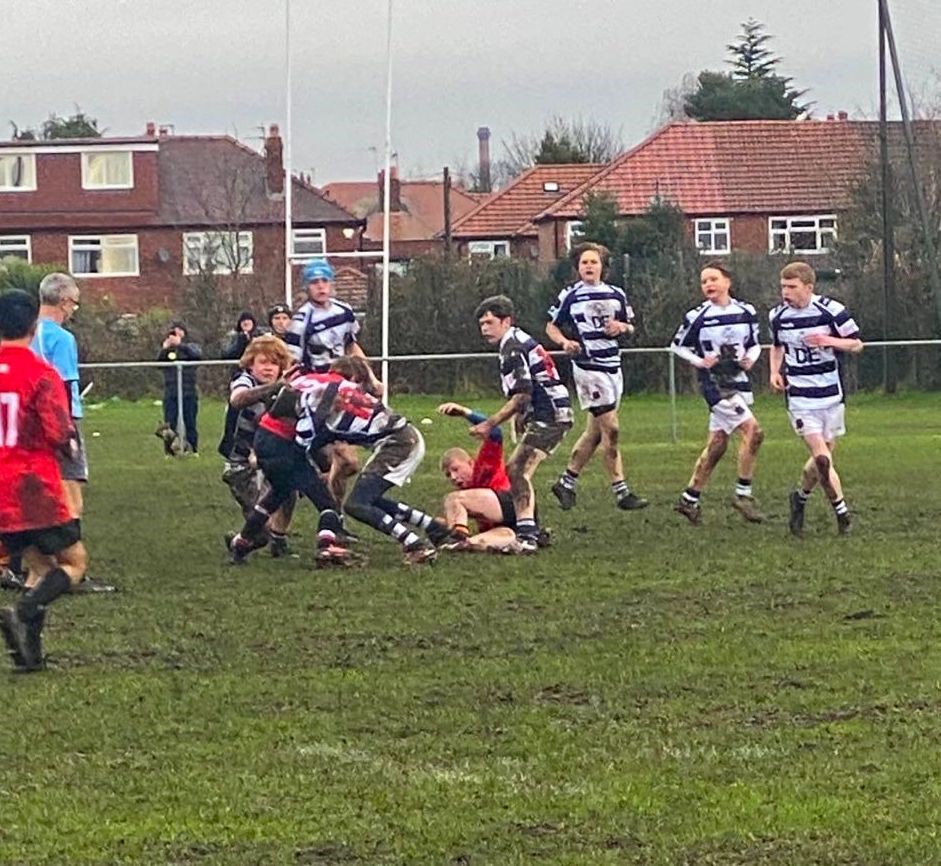 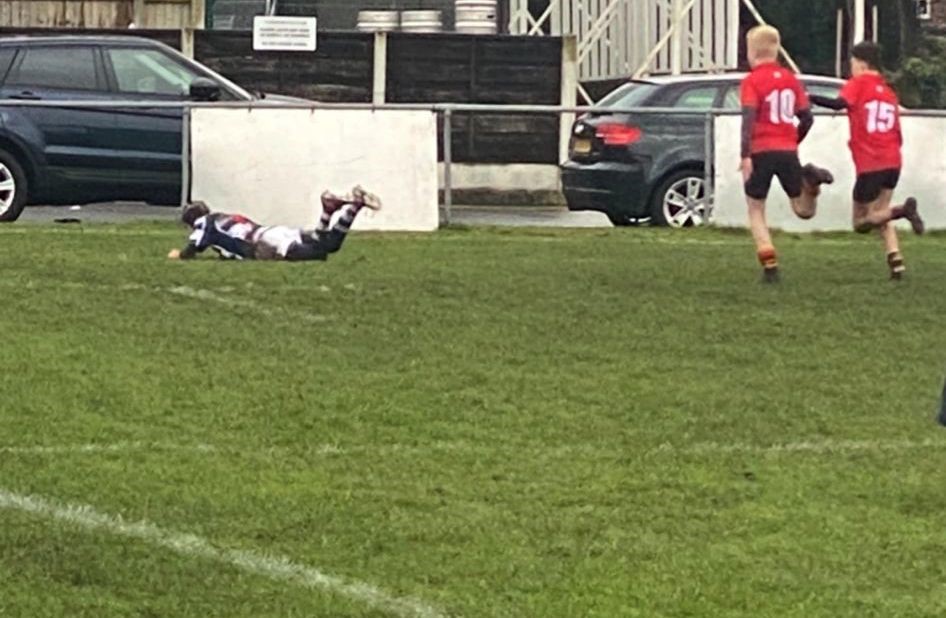 Eccles under 16’s took to the field on Sunday for the first time in 2022 hoping to continue the fine form they showed in 2021 with a tough Rochdale side the first visitors of the new year, the fixutre venue having been switched to Eccles due to pitch conditions at Rochdale.

Eccles kicked off and soon turned the ball over to force a scrum in the Rochdale half but Eccles were quickly penalised in the next phase for not releasing the ball. Rochdale came with a point to prove having suffered defeat last time they visited Gorton Street and made the first clean break of the match which was snuffed out with a solid tackle from Leighton who started the game at Fullback.

Both sides had opportunities in the early stages but some strong tackling from Lucas, Jack L and Jack C meant yards were hard to come by, whilst penalties were exchanged again for not releasing. The opening 15 minutes was an even contest with the visitors enjoying slightly more ball and territory. Eccles unforced errors and hesitancy in clearing out quickly at the break down was loosing them possession in good positions, compounded by some inaccurate throwing at the line out. Rochdale counter-attacked after winning the ball from another Eccles line out and only some excellent cover defence from Jack C and Joe D forced the Rochdale winger in to touch.

Eccles were struggling to keep hold of the ball but almost opened the scoring at 17' with a good break by Jack L, whilst Joe saw a chance to kick through from the scrum roll dead. The home side were now growing into the game. The drop out was gathered cleanly, but another penalty for not releasing gave Rochdale another chance to break and Leighton had to pull off another one on one tackle to prevent the try and also force the penalty, this time the visitors guilty of not releasing.

Eccles took the lineout on the Rochdale 40 metre line and built some good pressure forcing Rochdale to knock the ball forward and some slick handling from the scrum released Matt G in the centre, who flew through the Rochdale defense with Jack C in close support who provided the perfect pass to allow Jack L to dive over to the left of the posts and give himself a straightforward conversion to make the score 7-0 with 20' played.

More penalties and lineouts followed in a stop-start first half with the only other points coming from a 25 metre penalty from Jack L when Rochdale were judged to have been offside. Max showed the Rochdale defence a clean pair of heals after a short throw in from a lineout which was supported well by Abraham who continued to take the game to the visitors, whilst Evan caused Rochdale problems in the lineout with his excellent jumps and the half came to a close with Eccles ahead. HT 10 –0.

The second half started with Chayse gathering the ball and making good yards supported with runs from Cael and Jack L with Rochdale relying on deep kicks when they struggled to get out of their own 20 metre mark, although Raff returned the first of these kicks with a powerful drive after his introduction at half time. More strong running from Harry P and Cael set up good field position, and with Leighton now occupying the number 10 position his running game looked a real threat although an injury to Joe D meant a reshuffle with Harry P moving to 9.

With 10 minutes of the half played Eccles were controlling the ball well, but when they strayed offside from a kick and chase further penalties for not retreating the full 10 metres gave the visitors good field position and although some scrambling defence from Josh and Finn kept Rochdale out, with another penalty awarded and numbers out wide, a quick tap gave Rochdale the try on the touchline which was too far to add the extra points. 10 – 5.

With their lead cut to 5 points in a match they were in full control of, Eccles were stung into action. Jack C tried a kick through on the visitors 22 which again rolled dead, but with relentless pressure building, another Eccles try seemed on the cards with Leighton, Josh and Harry G agonisingly close to touching down. Rochdale were still providing a counter attacking threat, and a break down the left, chased by a pair of Eccles sprinting props, forced Sam D at Fullback to put a massive shot on the Rochdale centre to end that threat.

Eccles were camped in the Rochdale half now but failing to take full advantage of thier opportunities due to slow arriving support and a defiant 'Dale defence. At 55' Jack took a penalty after the visitors came in at the side of the ruck but his kick hit the post and the Rochdale defence dived on the loose ball. When the restart on the 22 line went straight out Eccles had another opportunity to score from the scrum. Harry P picked the ball from the back and found Matt G who attracted the defence and when he moved the ball to Matt H, the captain took a couple of defenders with him as he crashed over under the sticks; Jack added the 2 points to make the score 17-5.

For the remaining 12 minutes both sides swapped penalties. Leighton left the field for treatment but despite the disruption of injuries Eccles were able to reorgainse and remained in controll. The game was pretty much done when Raff put a big shot on his opposite number and when Rochdale were penalised for not releasing Jack L ended the game by kicking the ball dead.  Another Eccles win and some Christmas cobwebs blown away which should put the lads in a strong position when the Lancashire Cup starts again next weekend. FT 17-5. 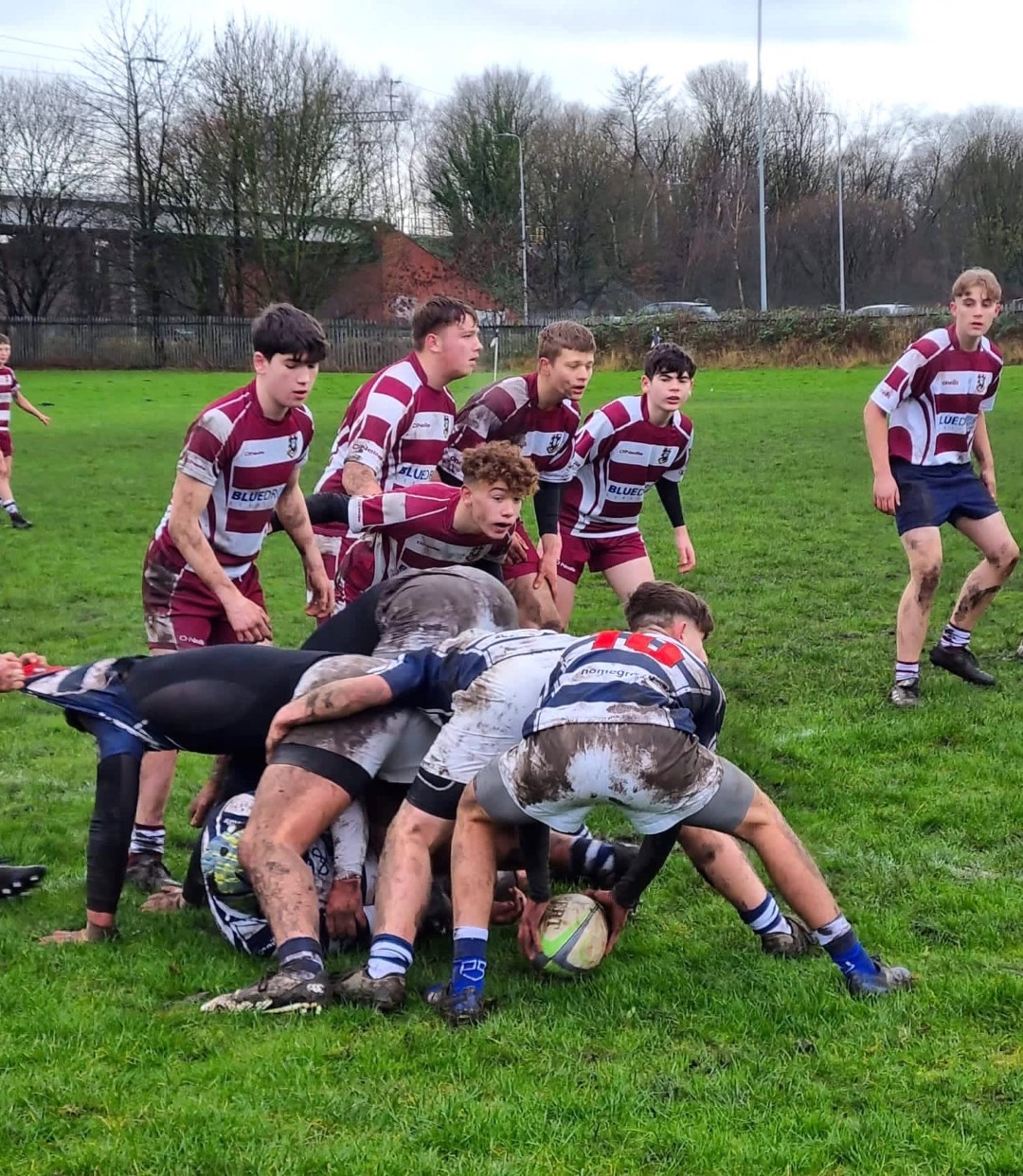 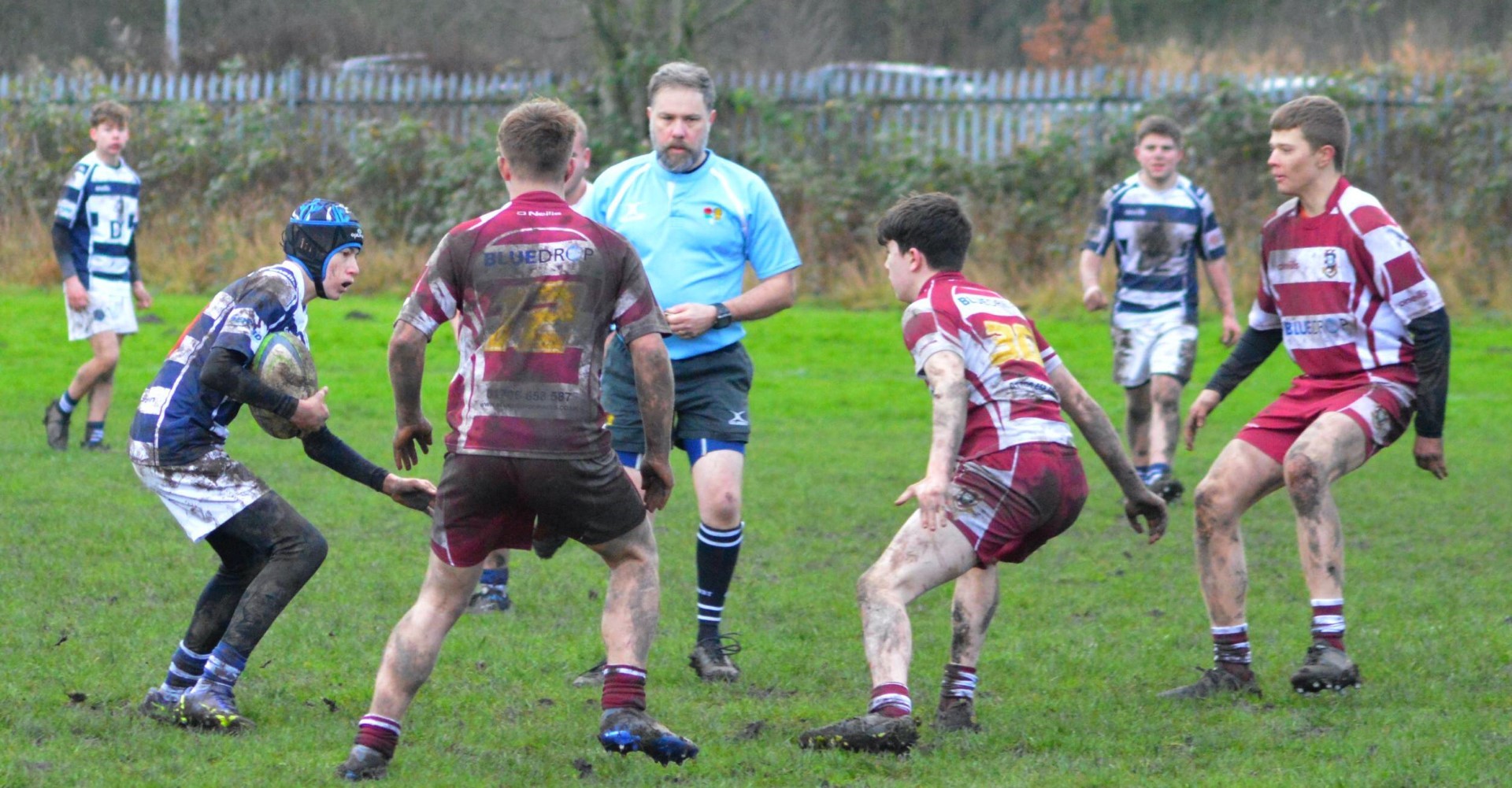 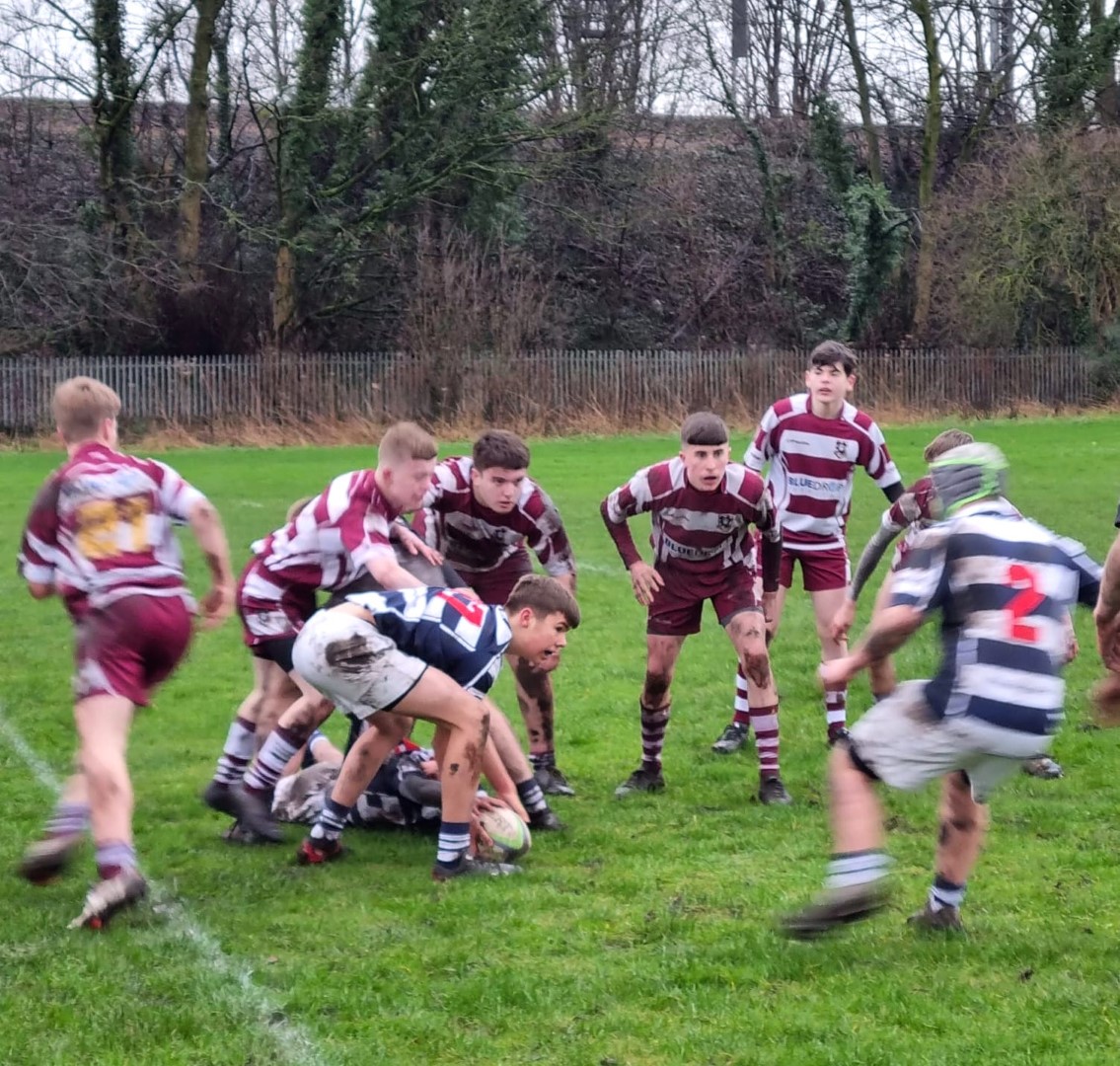 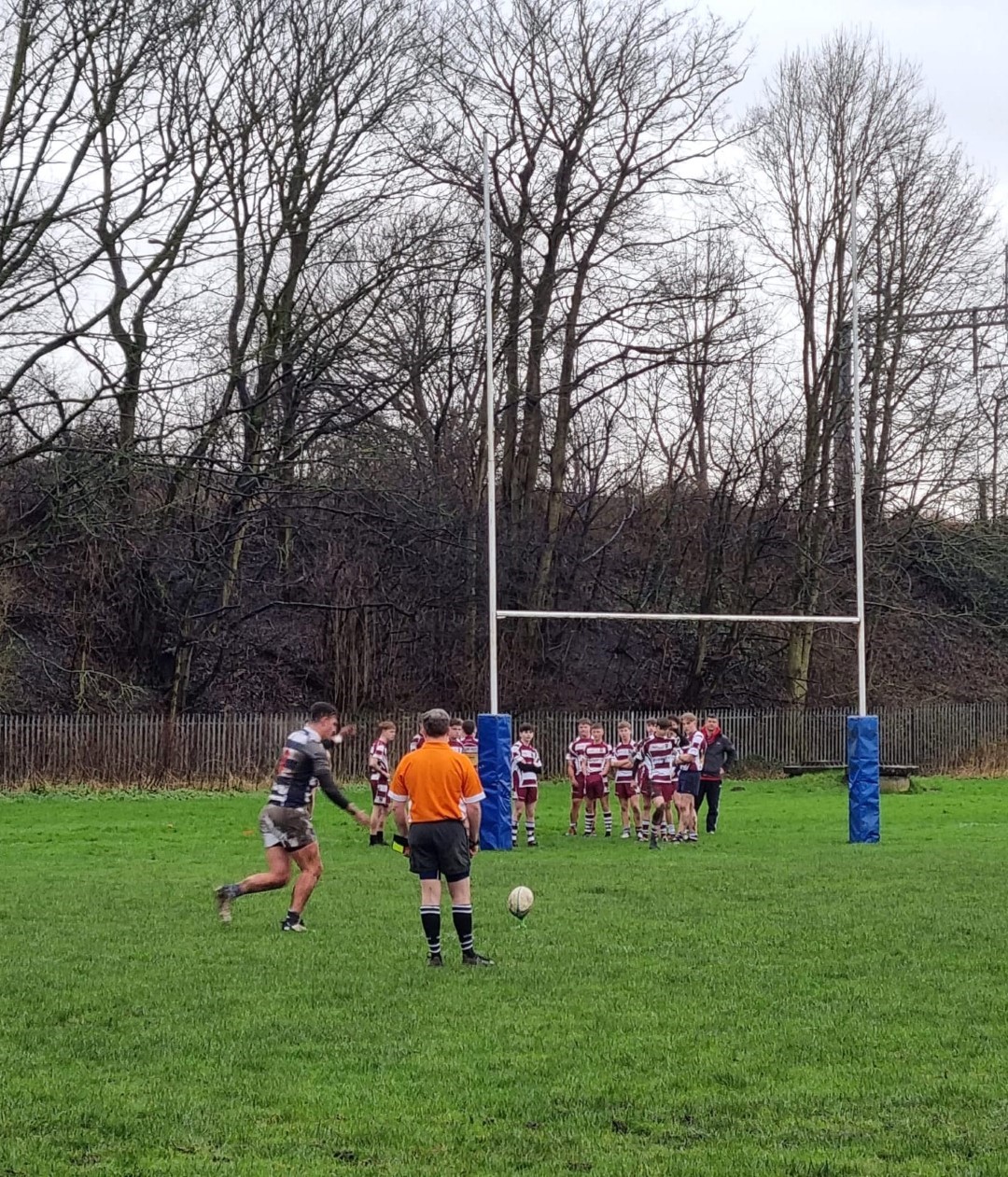 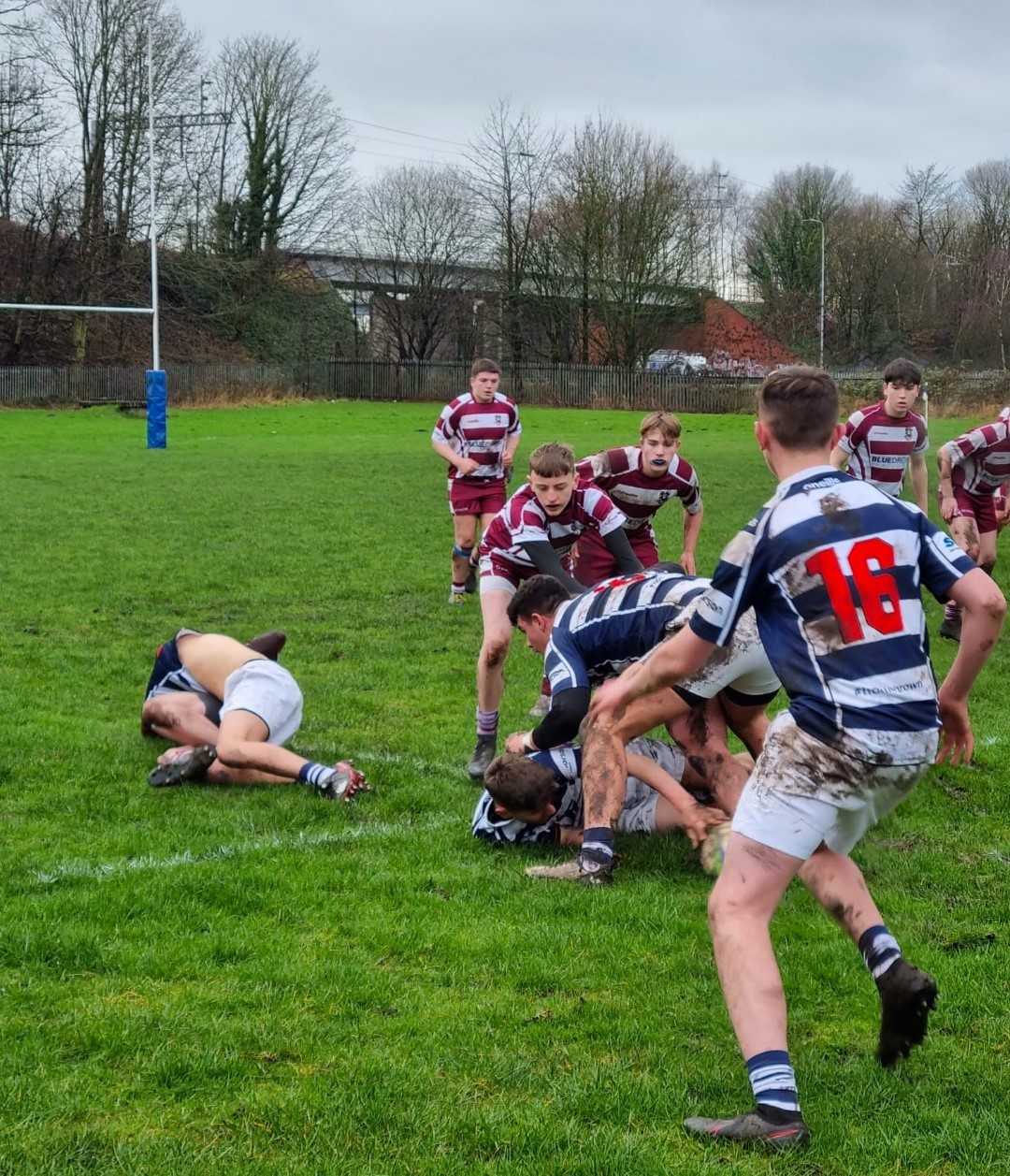 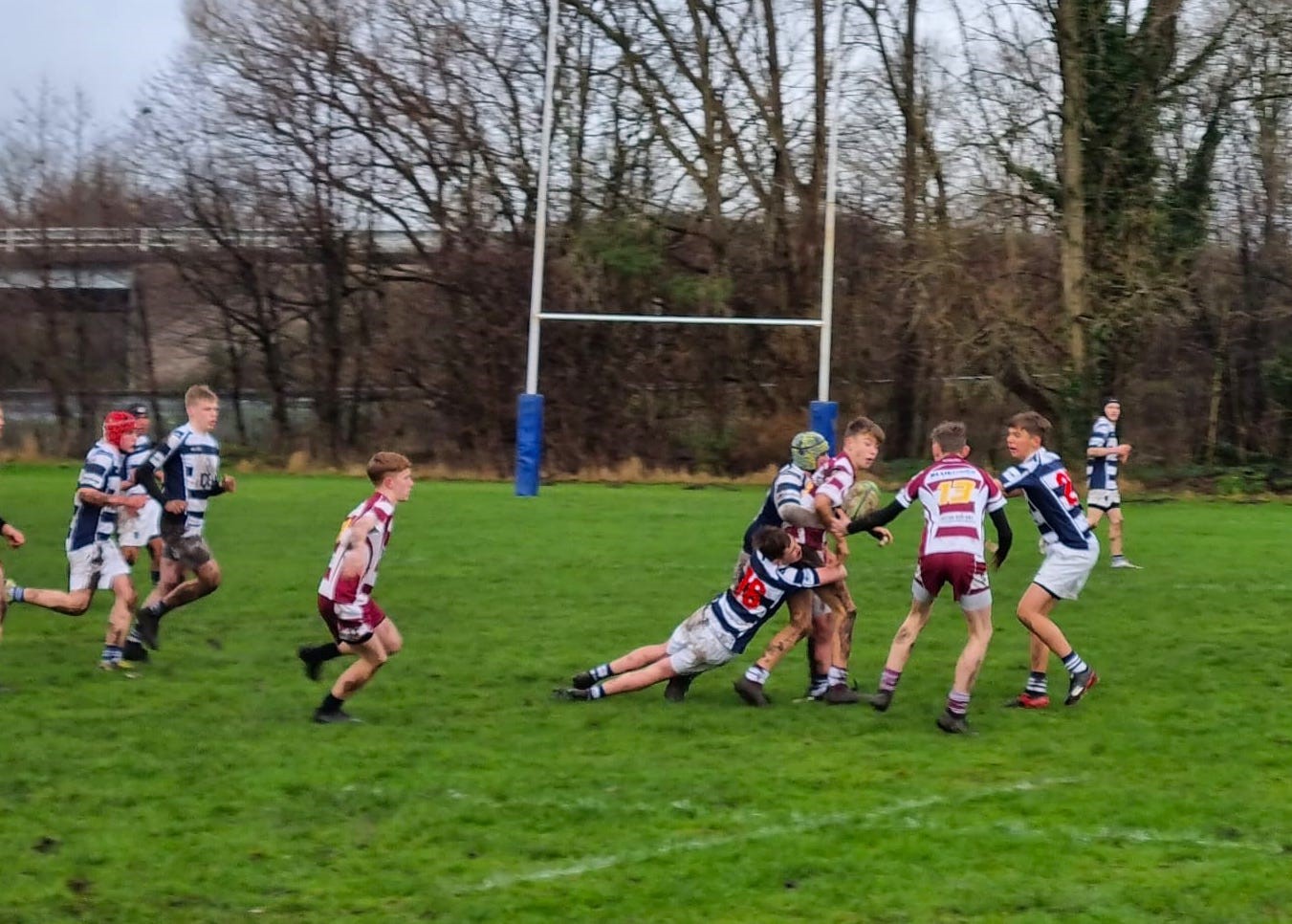 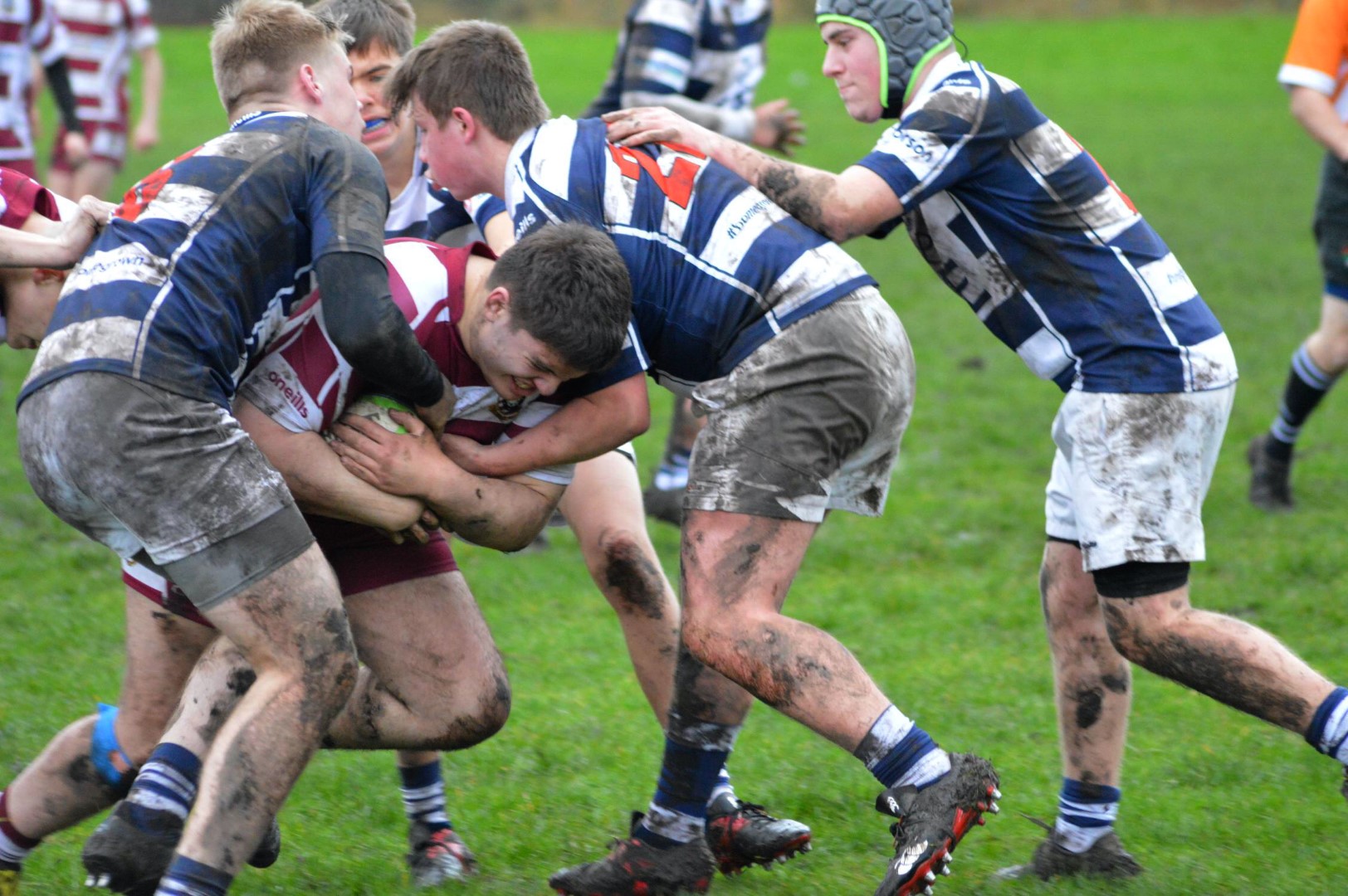 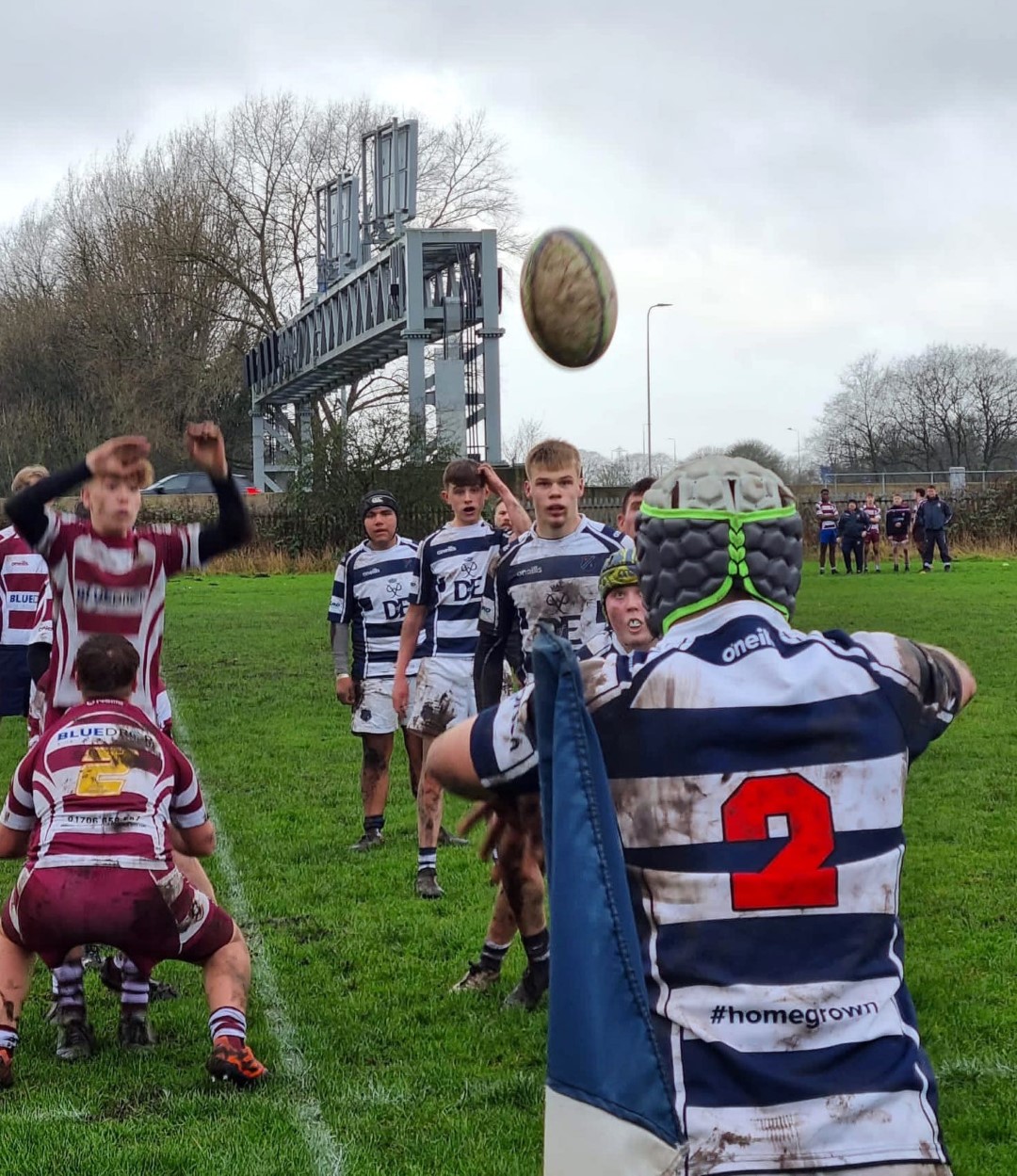 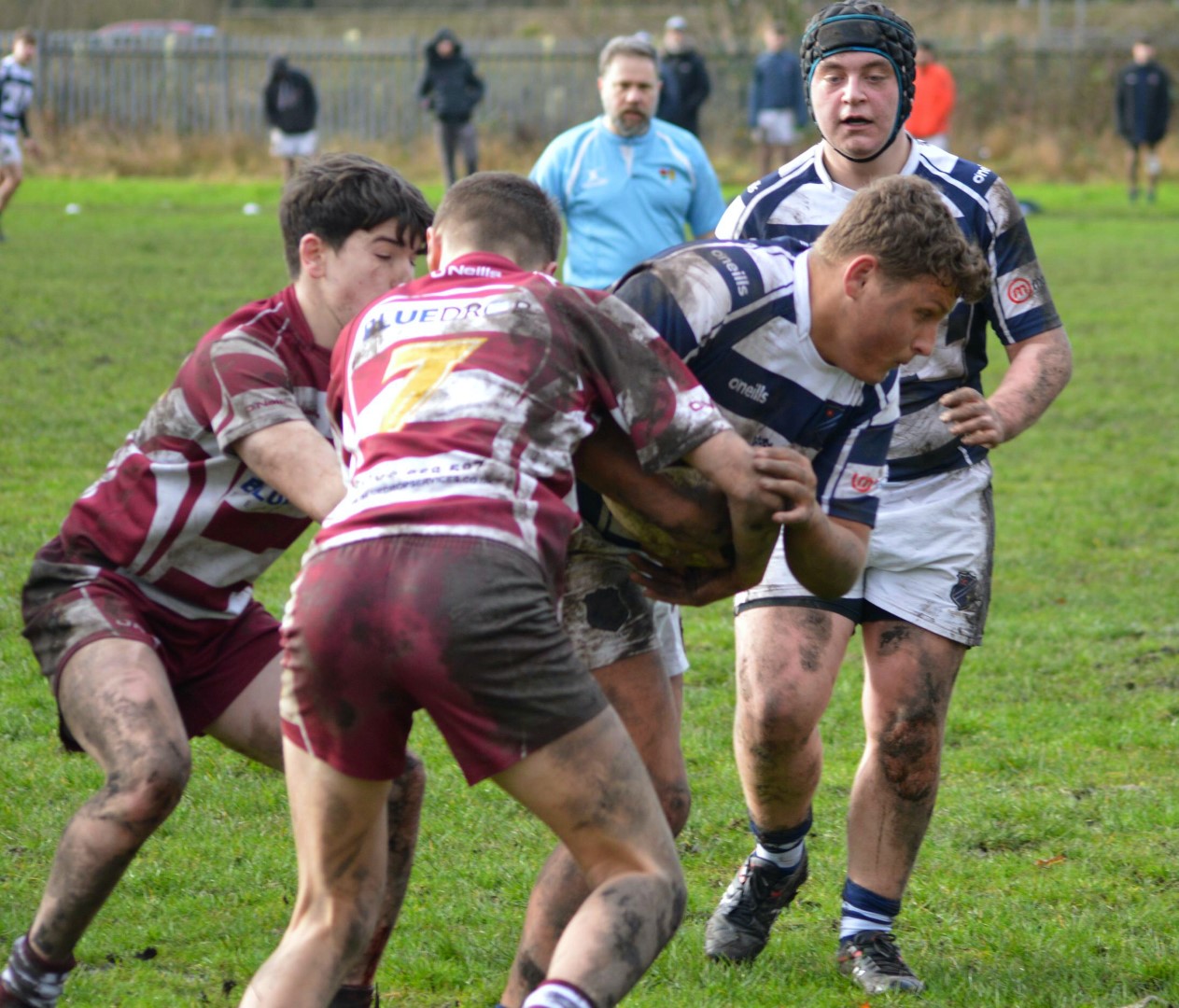 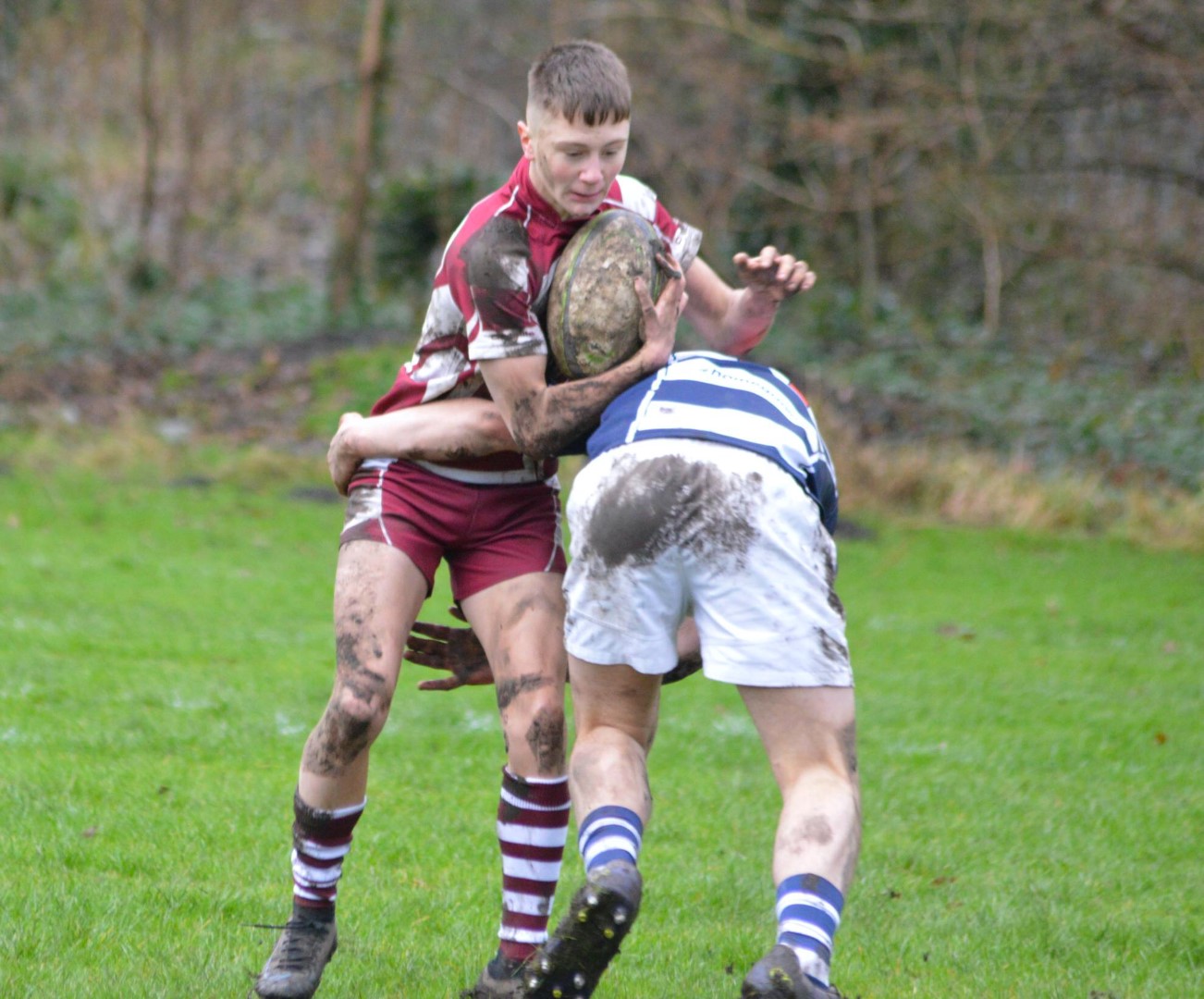 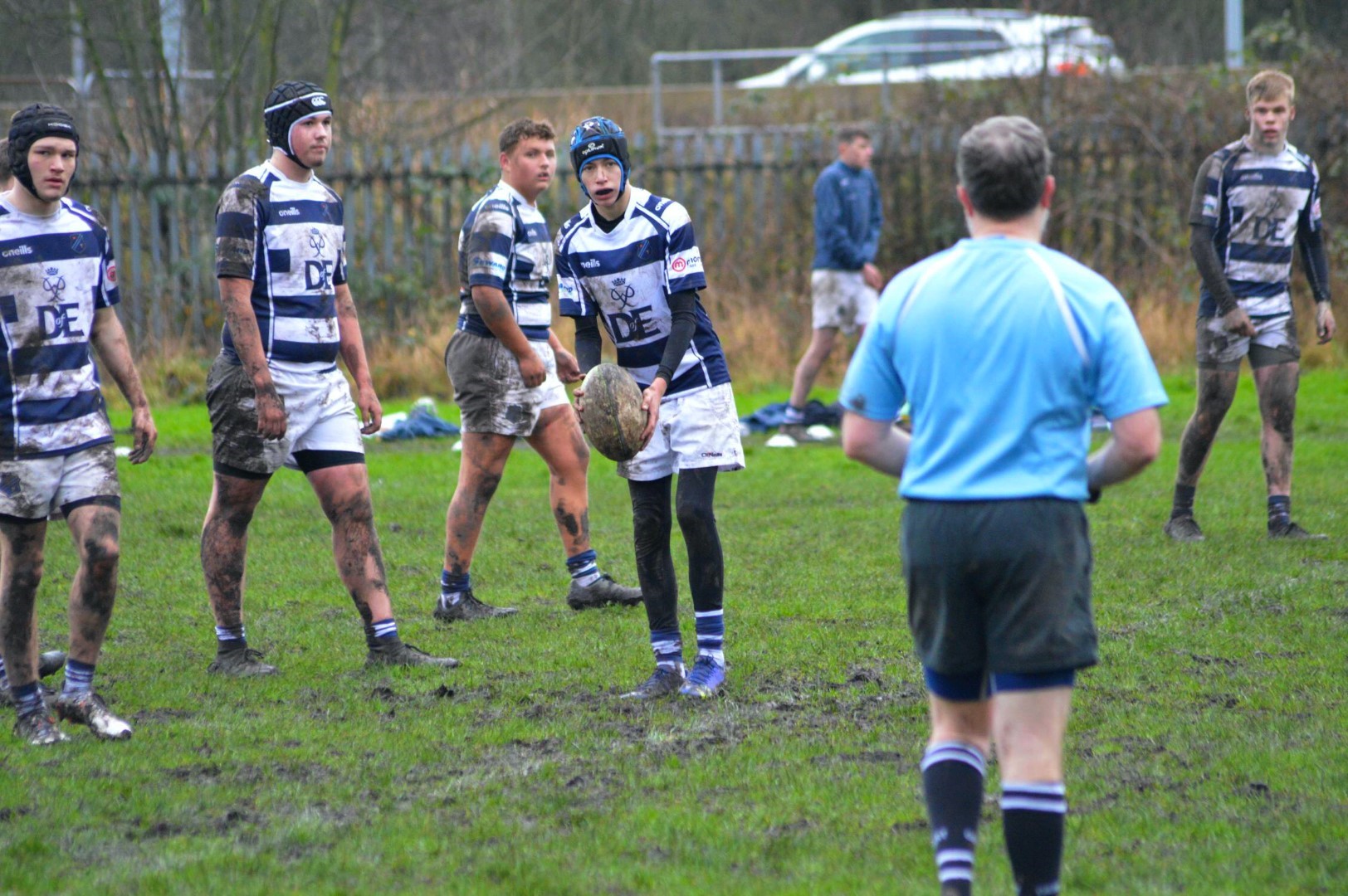 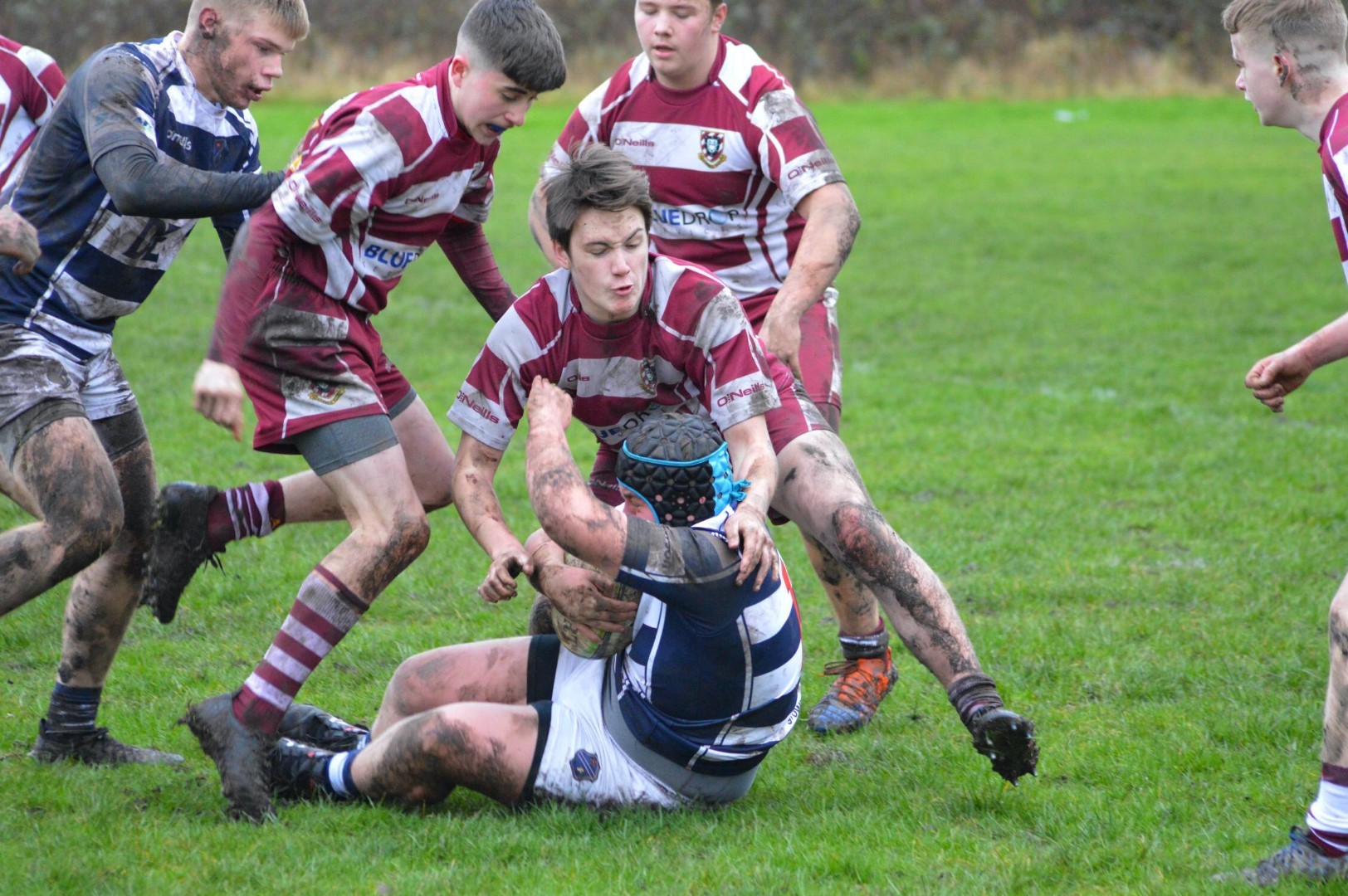 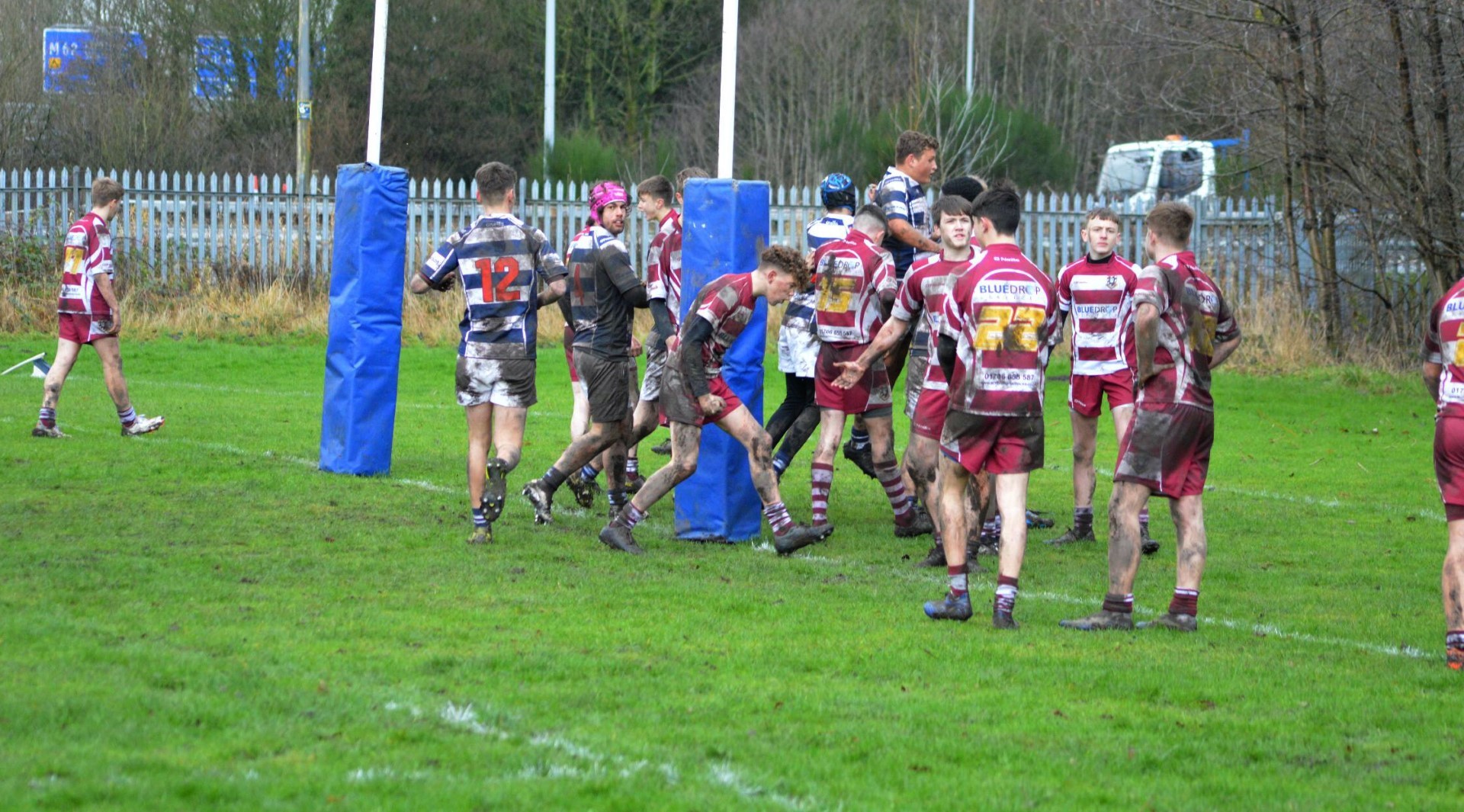