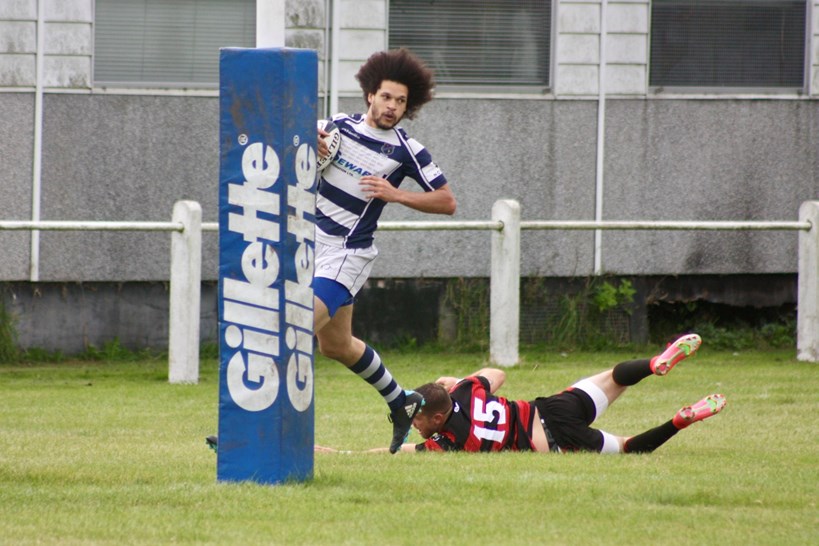 Eccles travelled to current league champions Widnes on Saturday with a squad that again saw lots of rotation in personnel. Eccles’ current injured player list is becoming a selection nightmare and the general consistency of player availability on a weekly basis is worrying as playing rugby for a lot of the squad seems to be falling behind other options at present.
Even with all the above Eccles still managed to put out a squad capable of beating Widnes and this was hugely evident in the first Half with the forwards setting a strong platform against a much larger Widnes pack giving the Eccles back line the opportunities to break the Widnes defensive line at will, lead by young centre Shea Skillicorn.
With quarter of an hour played the game was in the balance with an even share of possession and good running rugby from both teams. Gavin Ackers-Johnson broke the deadlock with an intercepted a pass on the right wing and the Widnes fullback's attempts to catch him were in vain as Gav dotted down behind the posts for Eccles to take the lead.
Eccles continued to exploit the Widnes defensive weaknesses with Shea, Gavin, Fullback Rory McGrath and young back row Ryley Thornton making huge yards up the field on numerous occasions but either a lack of support or an unforced error saw the Eccles men throw these opportunities away leaving five good tries on the field. Widnes equalised then had a man sent to the bin and despite the disadvantage scored again and must have felt extremely fortunate to end the half 14-7 ahead.
The second half started and with it came some significant changes. Refereeing interpretation confusion commenced as Eccles' Lock Hugo Austin saw a yellow card for “ Trying to Stop the Widnes player from Scoring“. Eccles’s errors from early phases increased massively giving the Widnes side and their heavy forwards a territorial advantage which they didn’t waste scoring a few tries from strong carriers at close range. The next 10 minutes saw Eccles trying to play themselves out of the hole they had found themselves in and some really poor discipline at the breakdown from the Widnes men saw penalties awarded to the men in blue and white. On numerous occasions extra 10s were marched for questioning the match official's decision followed by yet more confusion when replacement back row forward Kieron Reed saw a straight yellow card for committing an infringement around the ruck inside the Widnes half. No warning, No 10 marched, just a straight Yellow in a position of very little attacking threat.
Widnes went on to score twice more in the closing stages and the game ended 36-7. The Eccles men will be angry about the early wasted early opportunities and will look to correct that over training in the coming weeks before our next fixture.
Match report Sam Simpson
16’ TRY ECCLES (Gavin Ackers-Johnson) 0-7
23’ TRY WIDNES 7-7
30’ YELLOW WIDNES
34’ TRY WIDNES 14-7
HT 14-7
43’ YELLOW (Hugo Austin)
44’ TRY WIDNES 19-7
50’ INJURY (Alex Speakman)
55’ TRY WIDNES 24-7
65’ YELLOW (Keiron Reed)
67’ TRY WIDNES 29-7
73’ TRY WIDNES 36-7
FT 36-7 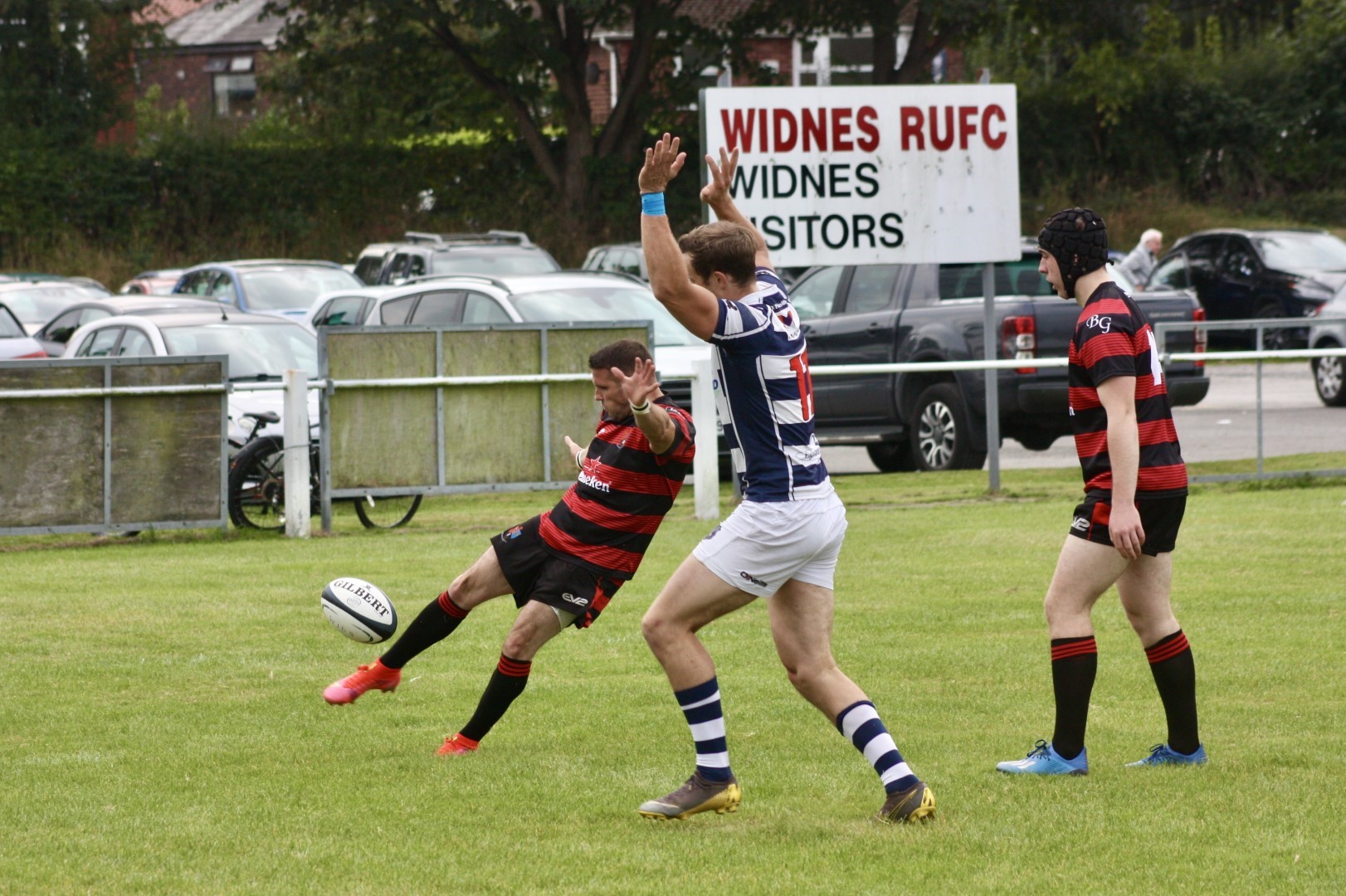 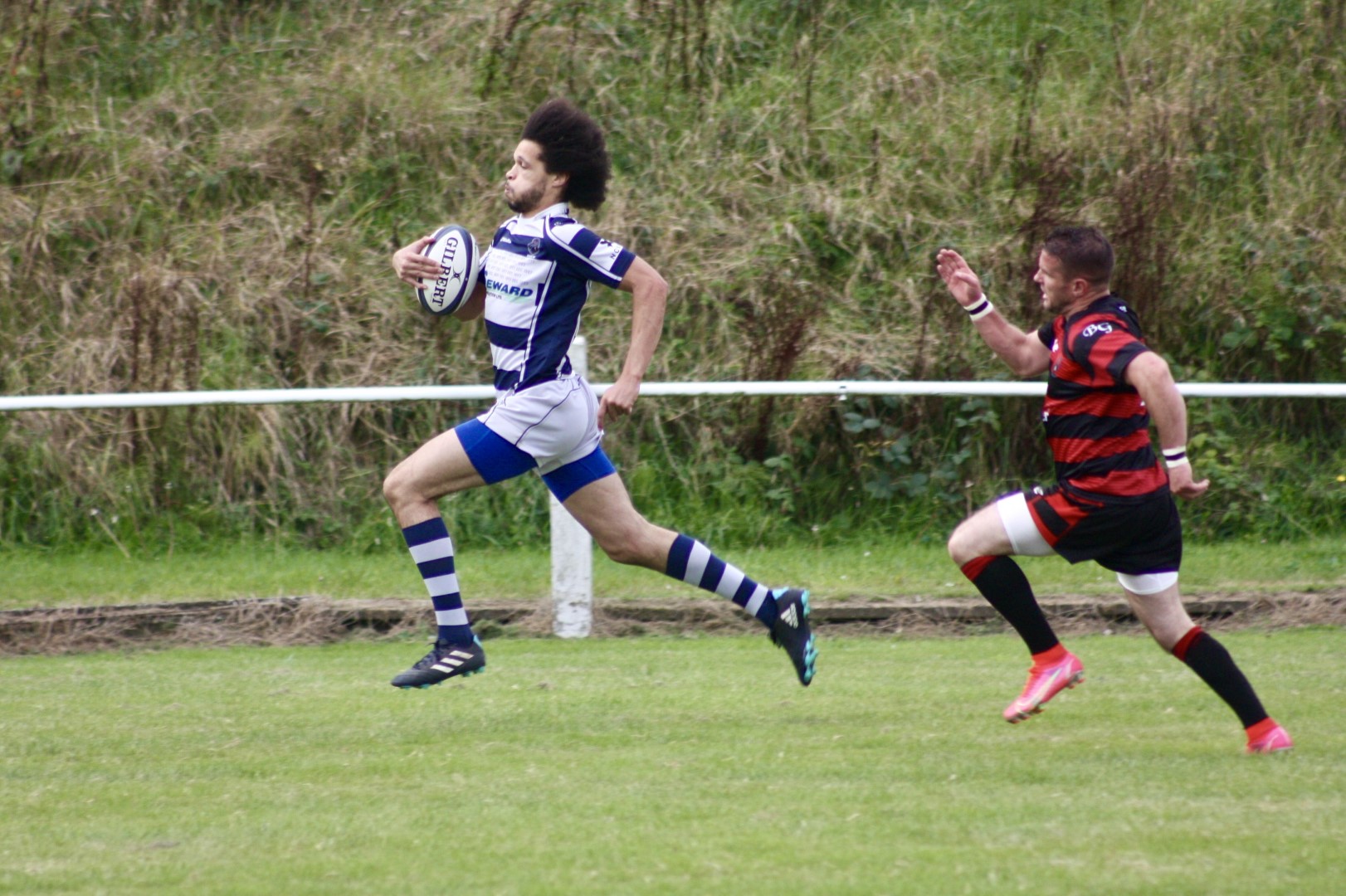 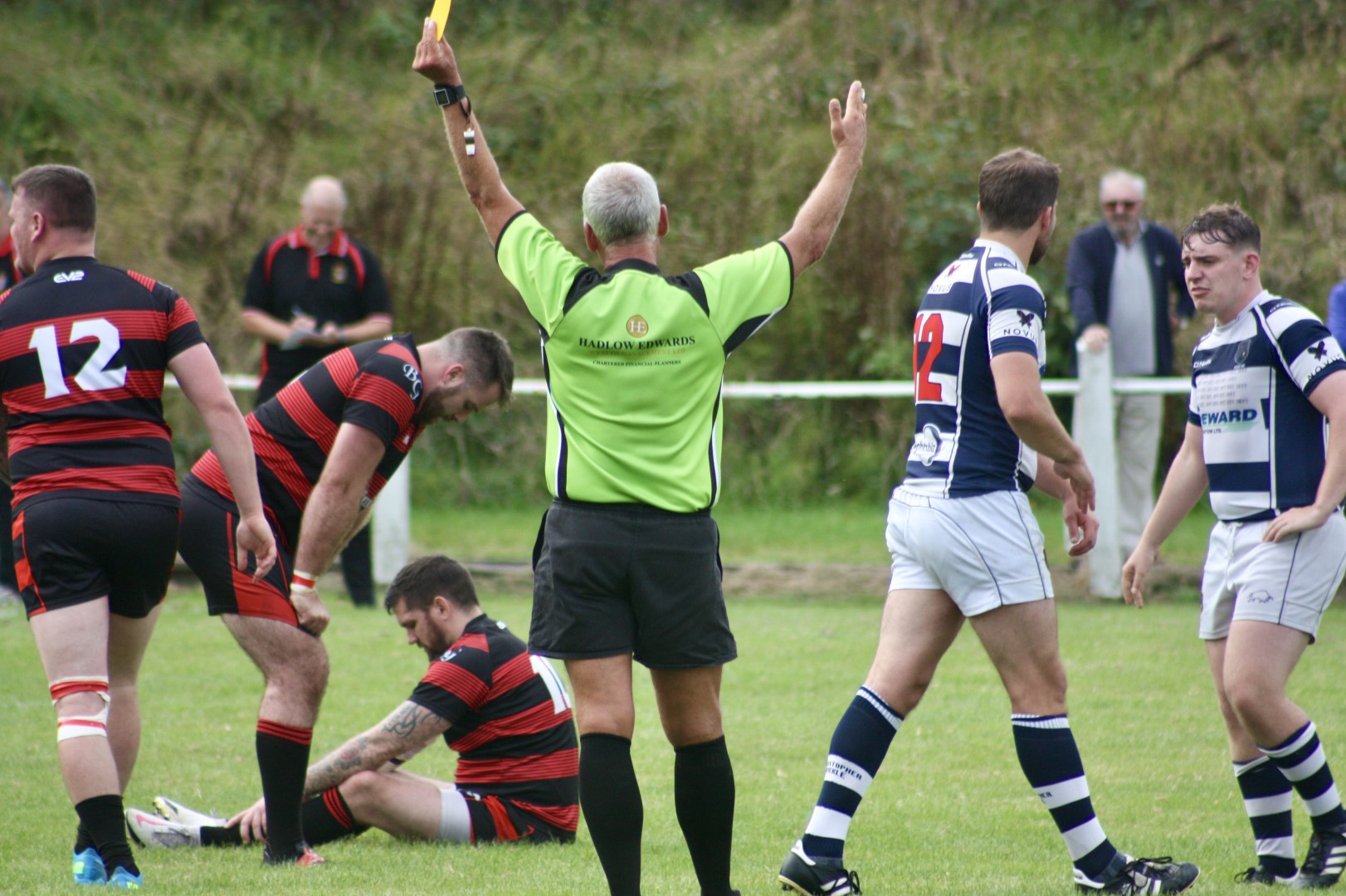 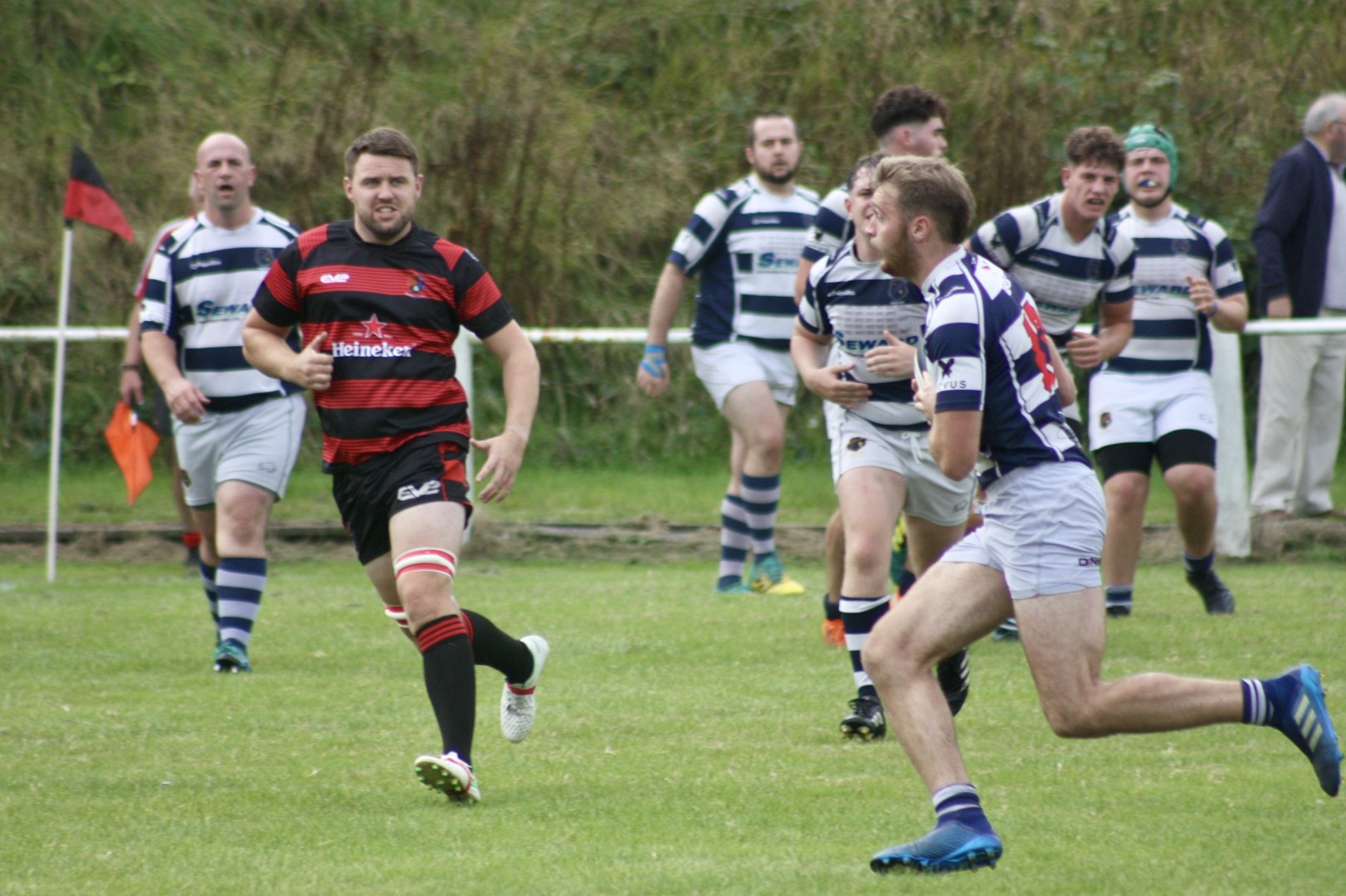 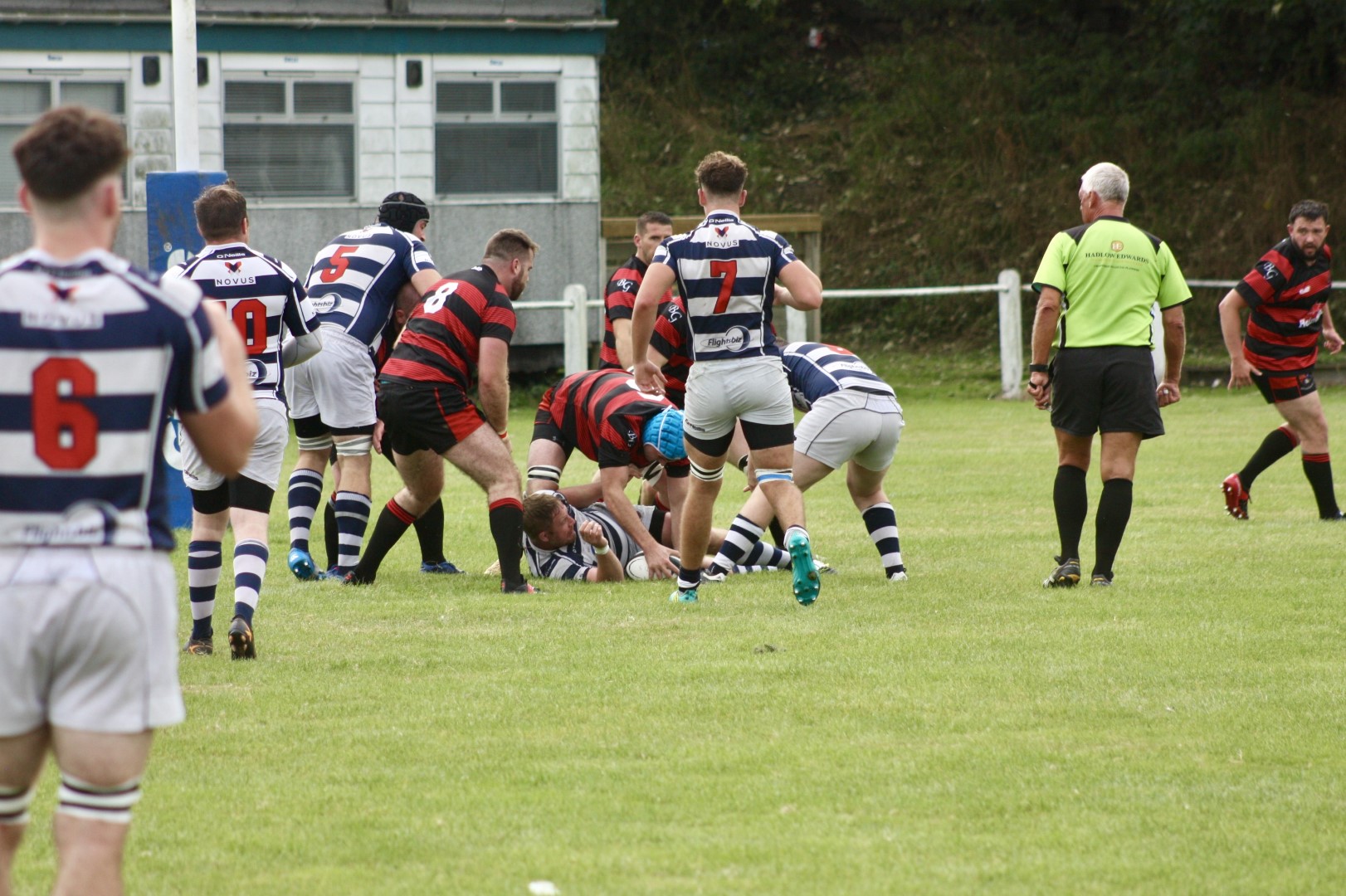 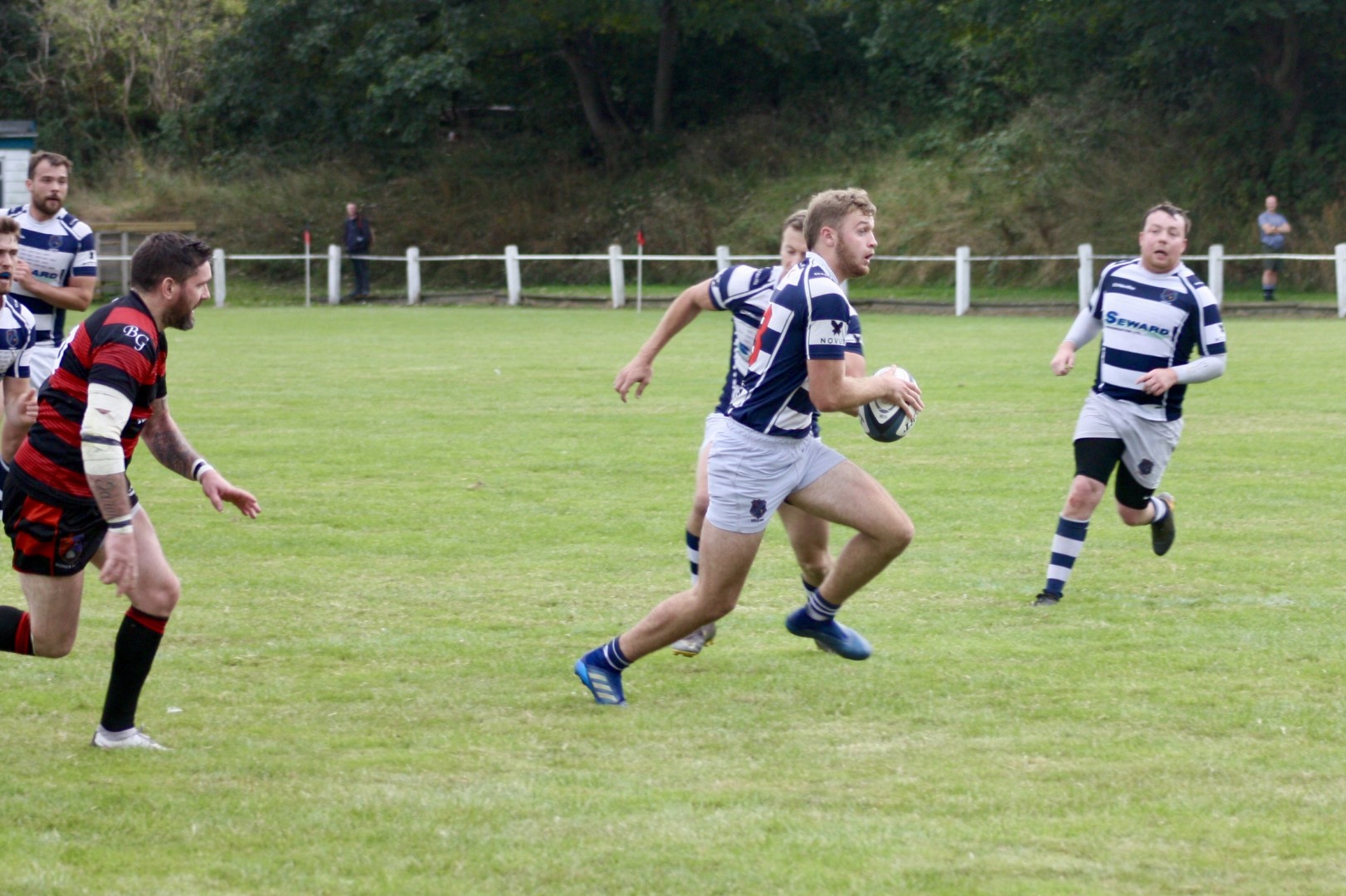 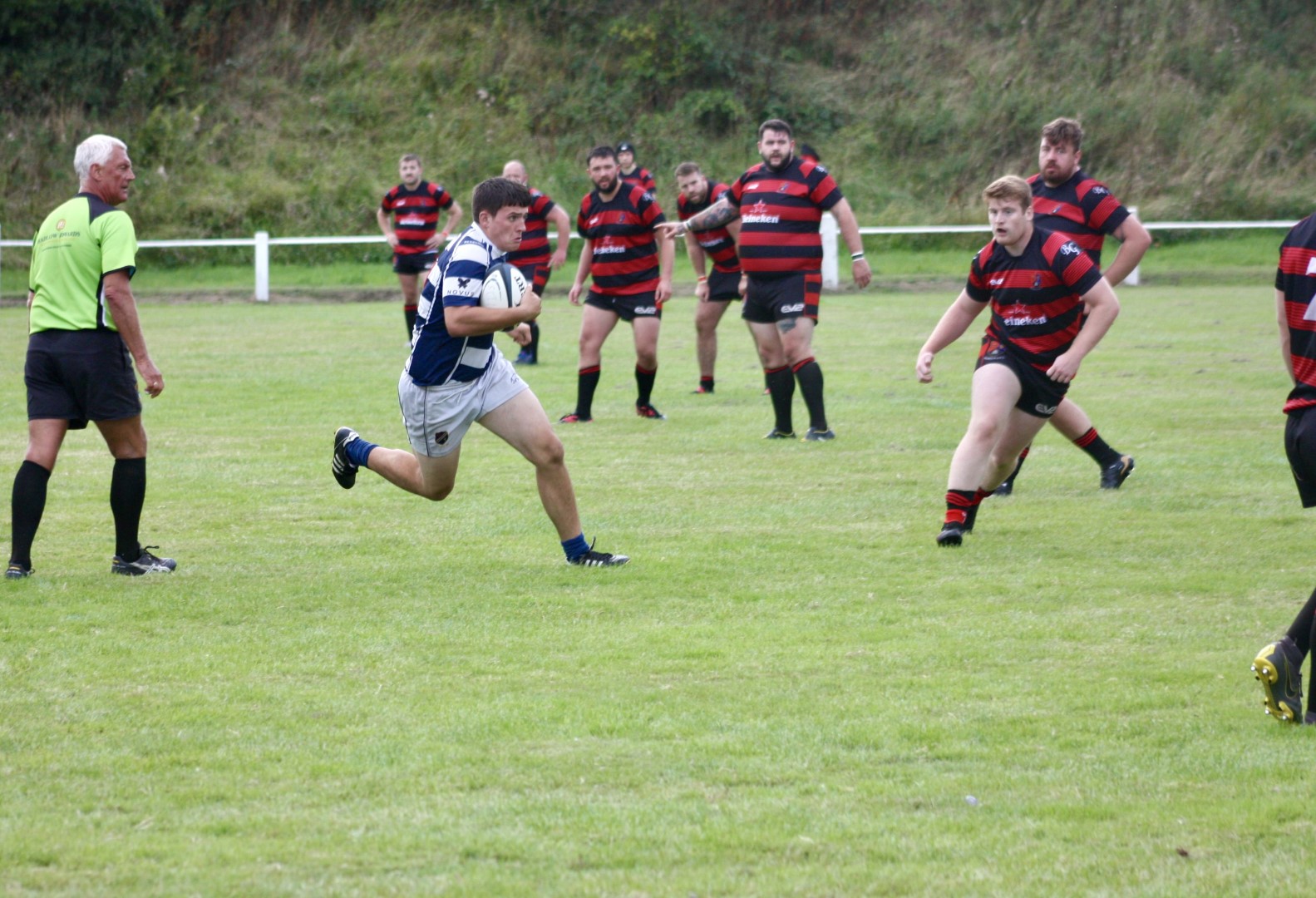 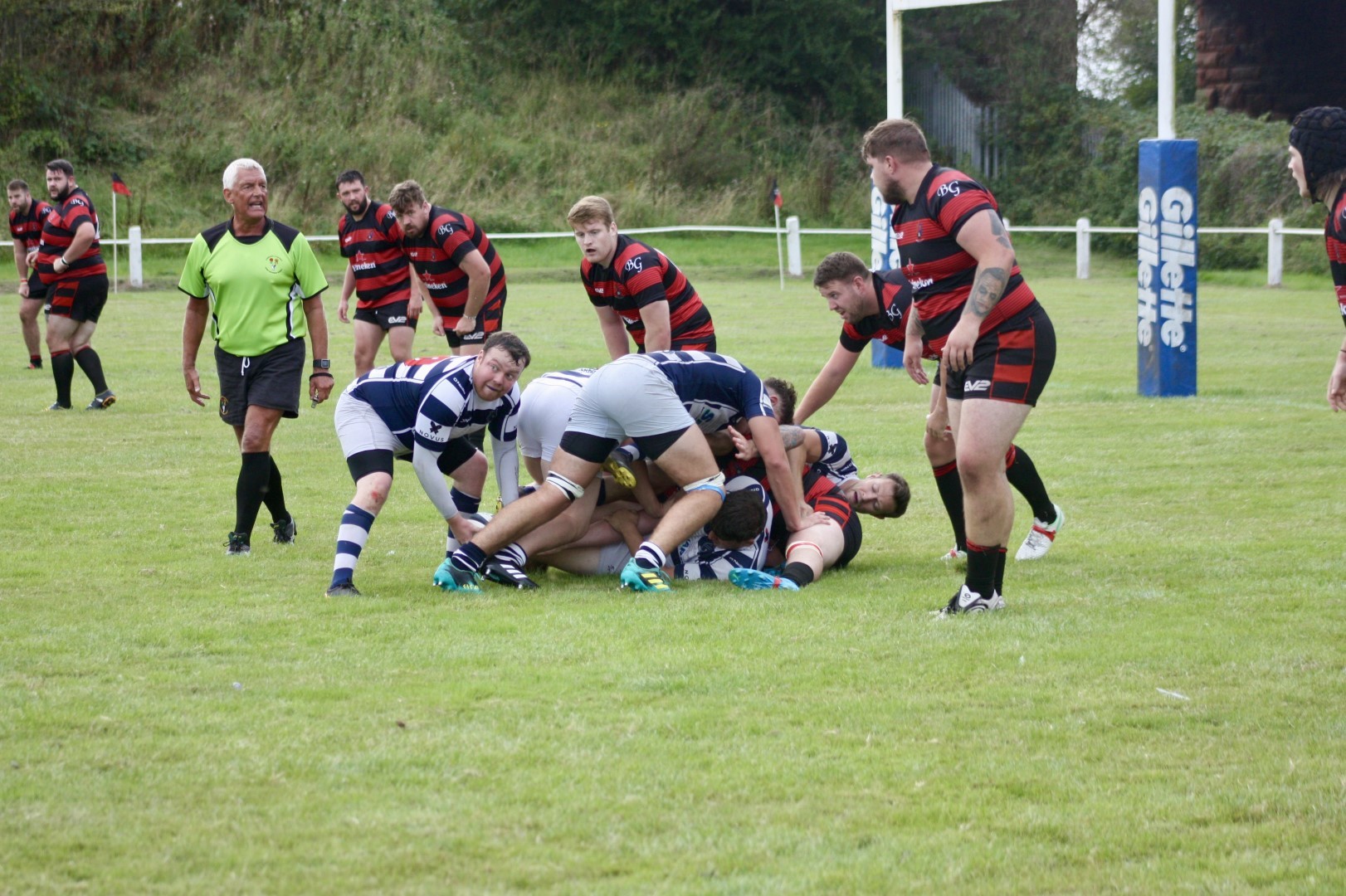 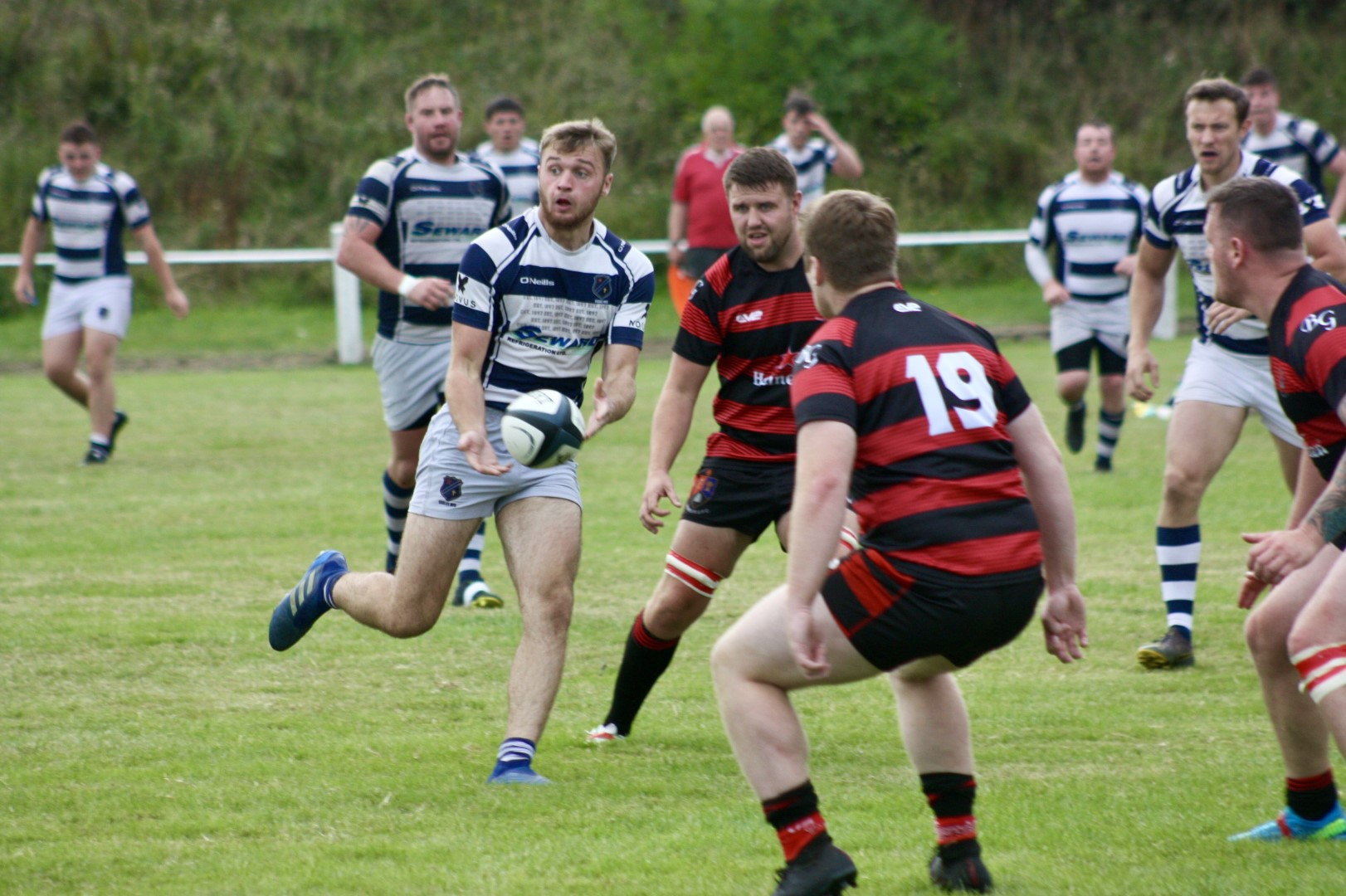 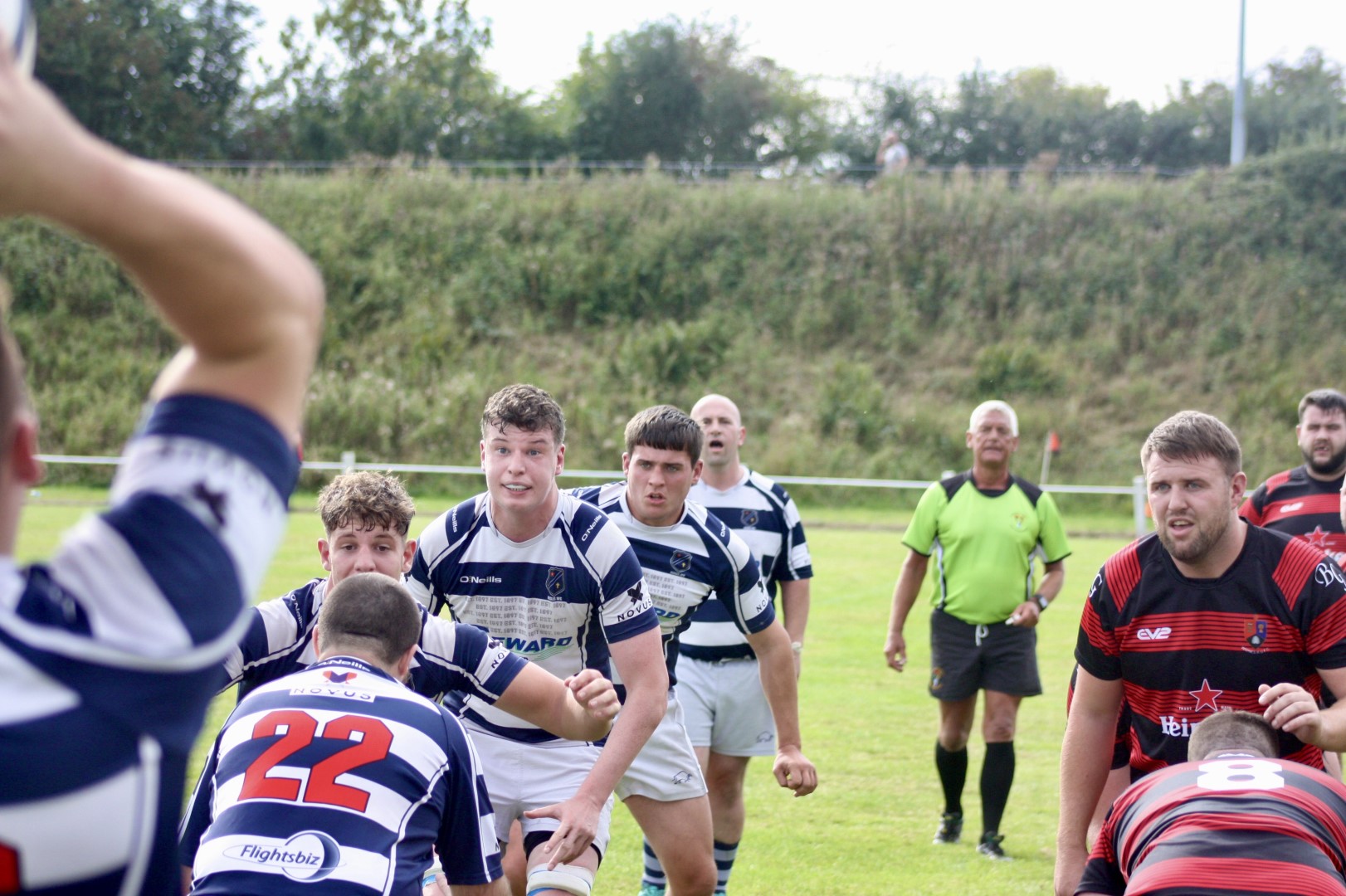 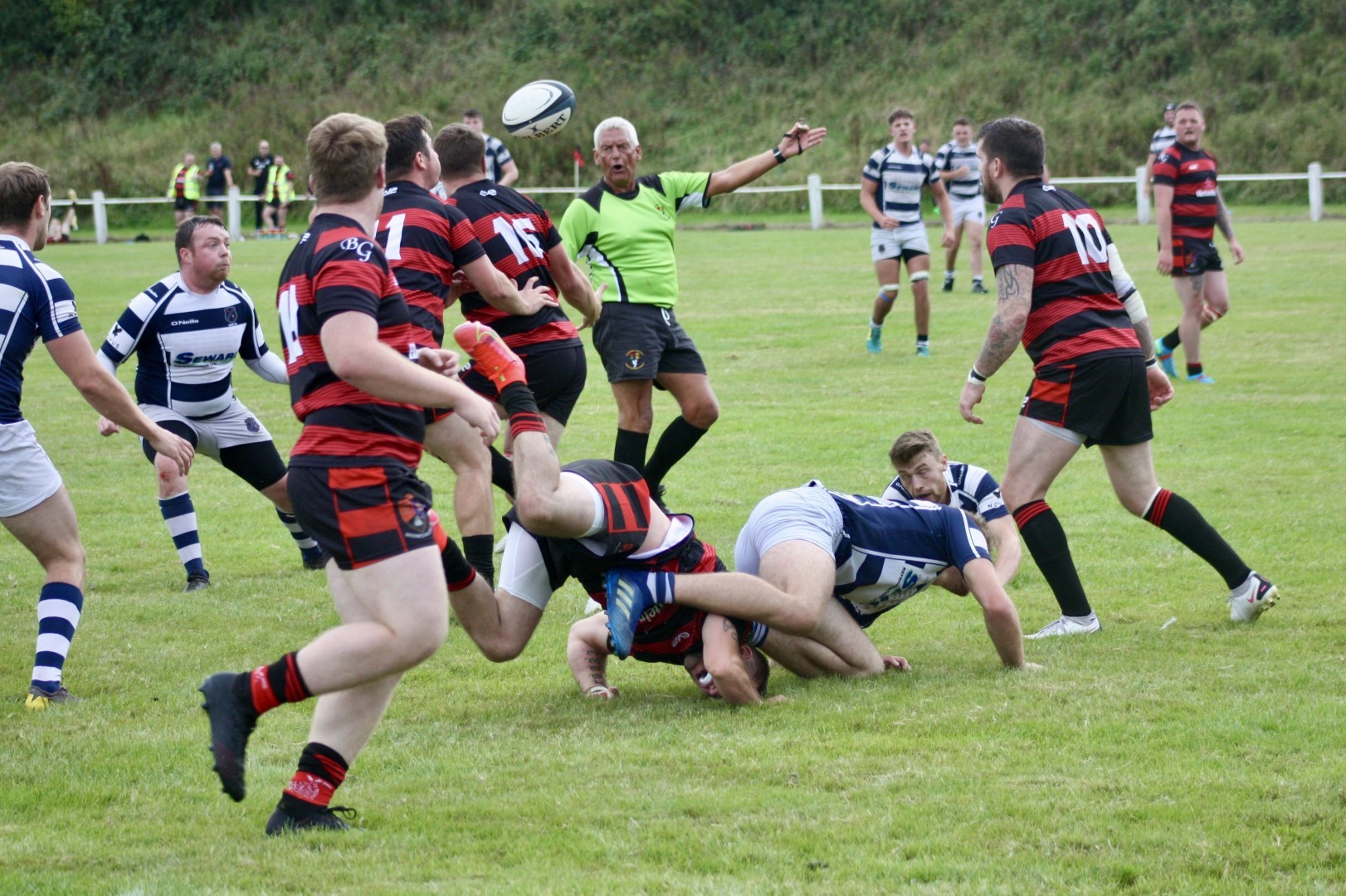 After a narrow loss to Rossendale in our last meeting (almost 2 years ago) we were keen to show how we had improved. But with the loss of several forwards, including our first, and reserve hooker, we weren’t going to be able to rely on our scrums and lineouts this time.

Eccles started positively, with some great possession and solid attacking play but unfortunately failed to convert their opportunities into points. Some fine individual moves often lacked support with players going alone. This was summed up by having two tries held up over the line.

Eventually our pressure paid off, with a series of looping passes across the backs eventually finding Henry, who skipped through 3 defenders in his trademark style for our first try. Will B converted for the full 7 points.

Unfortunately, we received a yellow card for our high tackle count. Rossendale turned this numerical advantage into constant pressure inside our 22 which gave them their first try in the corner. So, we went into half time with a slim 7-5 lead, not much to show for our dominance of the half.

The second half was a game of two halves in itself. In the first quarter Eccles suffered a few injuries and seemed to lose focus. Some sloppy, and often naïve defence allowed Rossendale to score three tries. Giving up large overlaps and being lobbed by deep kicks left us 7-22 down.

In the last quarter Eccles woke up, and with Rossendale losing a player to the bin, we started a glorious final 10 minutes.

With 9 minutes to go Josh showed great personal determination and backed himself all the way to the line. Weaving through the defence to go over beside the sticks with Will B converting for 14-22.

4 minutes to go and the forwards drove up the pitch, before releasing the backs who pass the ball wide to the overlapping Josh who cuts diagonally across for his 2nd – 19-22.

Eccles had their tails up and Rossendale were losing belief. In the Final play, Eccles surged forward and playing with renewed energy released Josh who ran between the posts for his third. Will B taking the extras for a full-time score of 26:22!

A thrilling conclusion that left us all wondering what we could be if we always played like the first and fourth quarters of the match.

Some reactions from the delighted coaches:

“Eccles dug deep and showed grit and discipline to turn this around, and came back with true determination and team spirit to secure a win.”

“The lads showed immense character and skill to come back from the brink and win it with three late unanswered tries.”

But at the next training sessions we will have lots to work on: Pods, supportive play and defensive positioning will all have to be addressed. 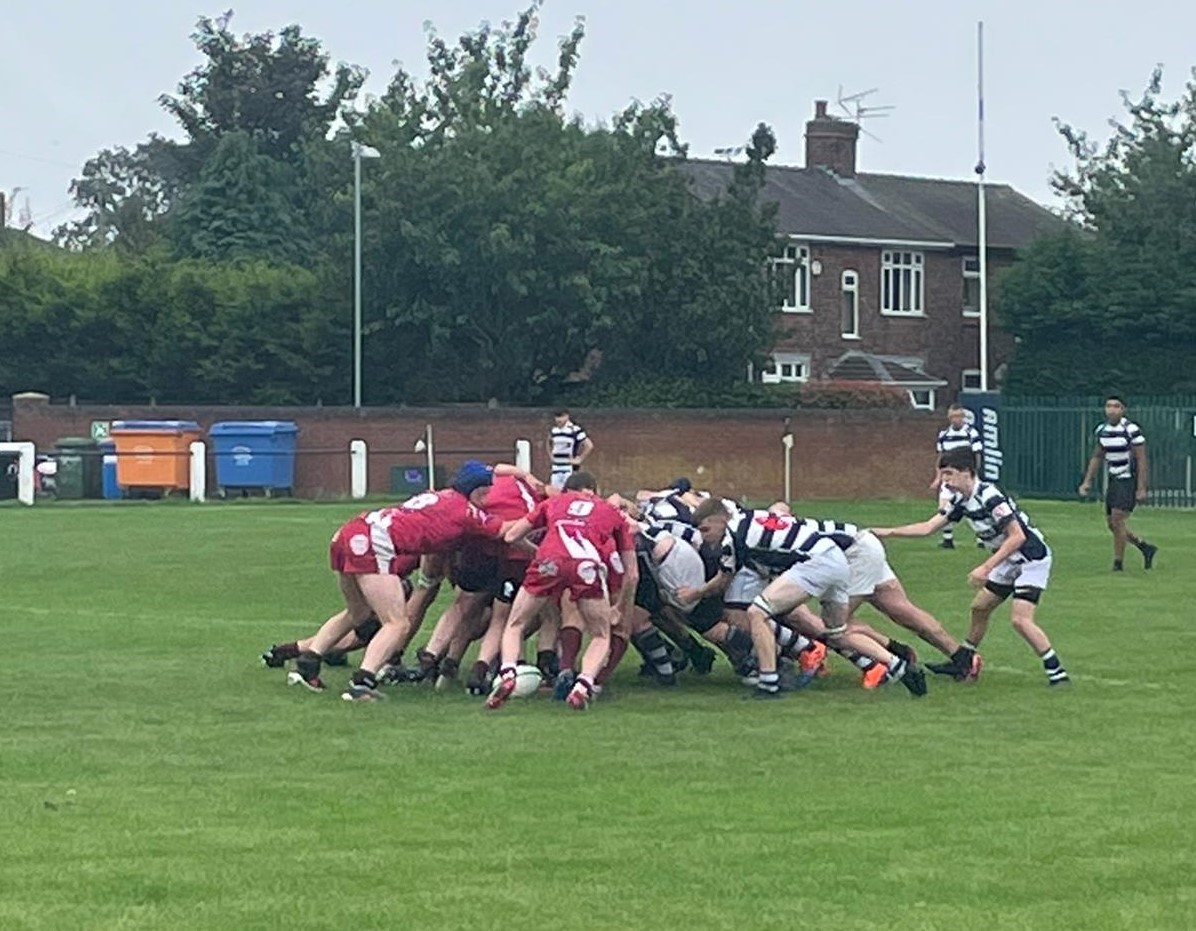 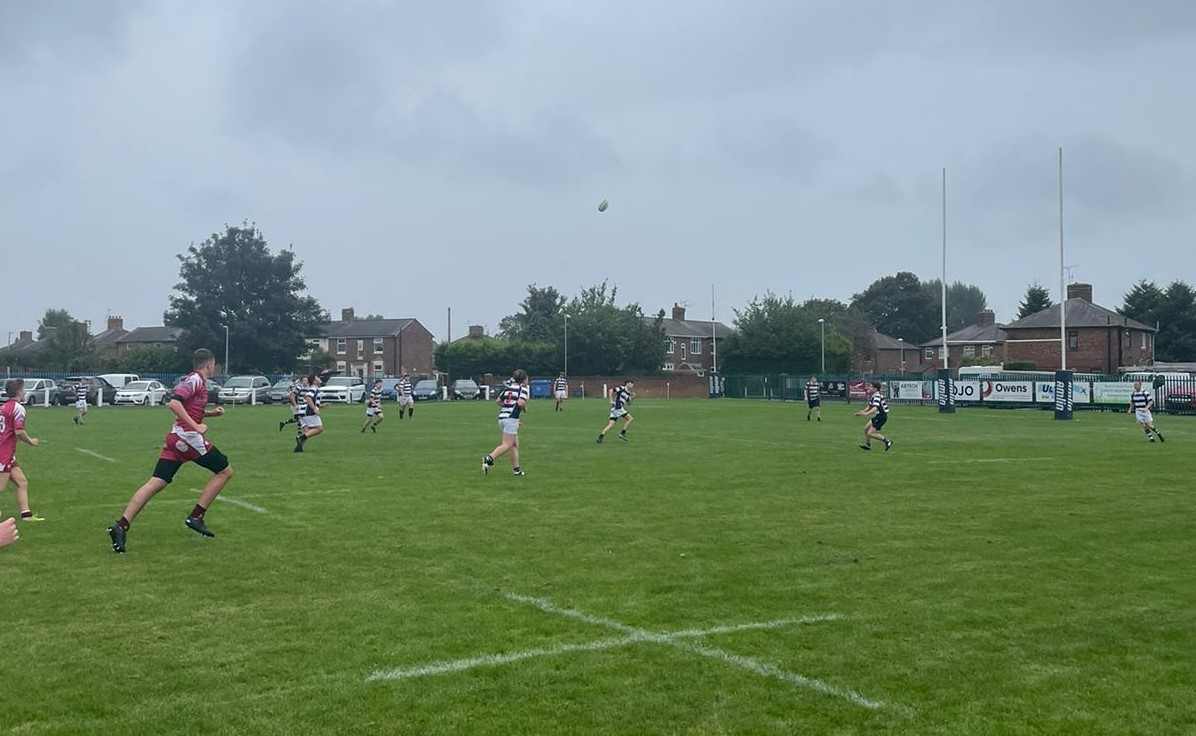