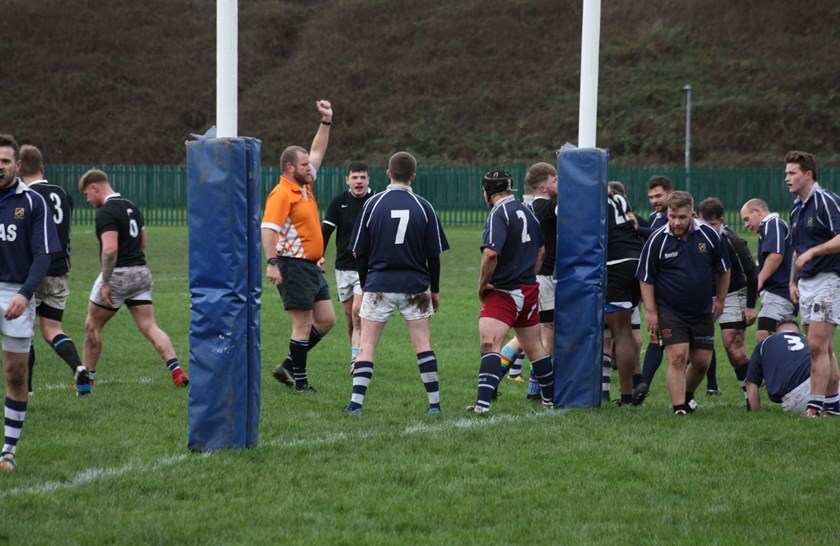 2020 may well have ended in Tiers, but the club's traditional Christmas contest went ahead as planned on Boxing Day, providing players and spectators with an opportunity to familiarise themselves with the new law variations and social restrictions that'll be in place when the Senior fixtures kick off (we hope) in January.

This year, the very first Ladies festive game kicked off the proceedings on the 1XV pitch which, having seen no action this autumn, was in excellent condition. This was followed by the eagerly anticipated game between two evenly matched Eccles mens teams, featuring many Homegrown former Eccles colts, who contributed to an enjoyable display of competitive, fast-flowing attacking rugby with the ‘Blues’ fighting back to earn a draw against the ‘Blacks’ with a late Penalty Try.

The Black team began the game brightly and within quarter of an hour were in command, their opening try coming from second row Conner James who broke through the midfield to score to left of the posts and their second try coming 7 minutes later from a build up of attacking pressure finished by low drive from Bash. The Blues took longer to find their feet in the game and their improved industry saw them hold onto possession and territory as the half progressed, with their hard work paying off on 36 minutes when sustained pressure saw an unstoppable Jordan Bromley power through the defenders and over the line.  This triggered a dramatic end to the first half, with Hooker Dan Aspinall denied an immediate response for the Black team when his Try was ruled out by the match official, and Blue team captain James Wright denied a scoring opportunity when his charge for the line was halted by heroic defensive tackling from Damola just before the break. The contest remained close with the halftime score 14-7.

The blues began the second period determined to reduce the deficit and within 5 minutes of play Zak Brooker burst through the lines to score on the left flank, followed by an excellent low kick in the wind from Alex Speakman, to bring the game all square 14-14. The Blacks responded with three successive tries from Leon Simpson (sliding at speed through the posts), Chris Fortune (jinking his way in field from the right to run it in under the sticks) and Kieron Reed (power and acrobatics) and looked to be in full control again with the score 35-14 as the game entered the last quarter. However, the Blues dialled up the guile and tries from Nic Haegman and John Wailing set things up for an exciting last 10 minutes. 35-28.  The Black team responded through a second Conner James try but the conversion hit the post and a few minutes later the Blues orchestrated their own rally, with Brom strolling across the line with the ball under his arm for his second try just to the right of the posts. His words of encouragement for the defenders as he dotted down were soon replied with jeers as he missed the opportunity to add the extras with his kick. 40-33. The black team were not to have the last laugh however. The Blues returned with the ball straight from the restart and their forwards piled on sustained pressure in the right corner. Brom passed to Lee Brennan who charged to within 2m of the line, Max Mulligan, who had a very good game as open-side now acting as 9, fed Brom who was halted short by the combined force of Reece Walker and James Cunningham. Mulligan reacted quickly and attempted to lunge for glory but without the ball which had been deftly trapped by Cunningham’s right leg in the ruck. The prone prop then skilfully used his left leg to trip Zak Brooker as he dived to cross the line. The referee, Mr Daniel Taylor, had seen enough and scored the equaliser himself, awarding a penalty try to the blue team with 1 minute to play and awarding a yellow card to Mr Cunningham who remarked he would have appreciated an earlier exit from the field.

Club Captain James Wright commented on the afternoon’s activities  “As all our senior players work their way back towards competitive contact rugby it was heartwarming to hear the laughs and cheers ring around the Gorton Street changing rooms once more.  Welcoming back spectators made the day even more special. I'm very proud to say that we are a club for all and it was fantastic to see people out in their new Christmas clobber cheering us on. Congratulations to all those who played. Have a relaxing and safe New Year, I’m looking forward to welcoming you back to continue our Journey in January"