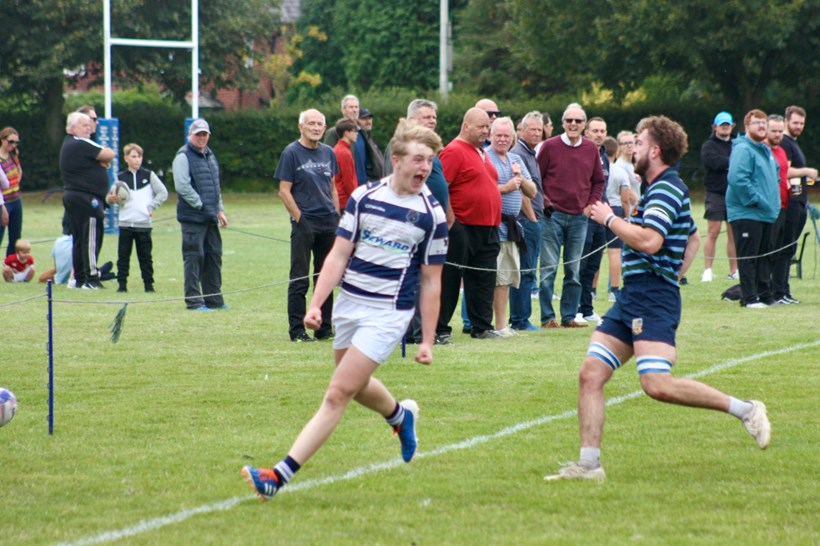 Eccles travelled to Ormskirk on Saturday with an extremely young side, with over half of the match day squad being 21 years of age and under, including four 18 year old men fresh from our #Homegrown production line making their senior league debuts.
Despite Eccles’s pre-match preparation being far from ideal due to a chain of events (including a missing starting backrow player from the squad on arrival, one of our locks having a blow out on the M6 and our scrum half getting lost resulting in both players turning up 15 minutes before KO) the Eccles men started the game in the best possible way, quickly establishing their fast flowing rugby, resulting in numerous line breaks and two early tries - the first at 7 minues from quick reaction and tap penalty from Chris Fortune who scored at the left of the posts, the second coming from an Eccles scrum inside the 22 scored and converted by 18 year old stand off Daniel Reed who weaved his way through the defence to the irght of the uprights.
The much lighter Eccles pack showed dominance pushing over the much heavier and more experienced Ormskirk pack and the first half ended with Eccles in command, but with multiple high tackles from the Ormskirk last last line of defence going unpunished, and a scrum drive over score ruled out for 'held-up', the 14-3 lead didn’t reflect the game at all. HT 3-14.
The second half began and so did the Eccles errors. A different approach from the hosts saw Ormskirk start to kick possession to Eccles at will, which normally wouldn’t be a clever thing to do, but multiple mistakes from the back 3 and some well executed kicks from the Ormskirk 10 gave the home side not only good territory but possession as well. Ormskirk quickly began collecting points from this tactic - a score straightaway under the sticks (10-14) yet more knock-ons and a try in the corner (15-14) - and before the Eccles men knew it a game they were in full control of in the first half was now completely in the balance, capable of tipping either way!
Eccles rallied from coach & captain words from behind the sticks to initiate a return to their first half display. Eccles responded, with the dominant Eccles scrum giving the Eccles backs plenty of opportunities to move the ball. A penalty awarded inside the 22 presented Dan Reed with the opportunity to even the score (17-17). At this point the game was swinging back to Eccles and another score looked imminent until a very poorly timed and executed kick from Eccles saw the home side run the ball from deep in their 22, up the right flank, to score and take the lead to the delight of the home fans (22-17). Eccles quickly regained the ball back from the restart, reestablishing a territorial threat. With minutes from the final whistle, Will Parky caught the ball on the halfway line and proceeded to weave and spin his way into the 22, picking up momentum with some backward running setting up a platform for 2nd row Hugo Austin to step in as acting 9 and ping the killer pass to Daniel Reed who showed again an exceptional eye for a gap in the defensive line, dashing through and dotting down between the posts for his second and the winning try, which he cooly converted. Final score 22-24 to Eccles.
The men in blue & white hoops will have taken a lot from this game. Coming out on top no matter what adversity is thrown at you is a lesson all coaches want their teams to learn as early in the season as possible.
YOU TUBE MATCH VIDEO
1. Rich Owen
2. Dan Aspinall #
3. Jack Robbins
4. Hugo Austin
5. Cammy Higgingbottom #
6.
7. Jay Christie #
8. Lee Brennand #
9. Tim Cullen#
10. Dan Reed #
11. Gav Ackers Johnson
12. James Wright #
13. Chris Fortune
14. Oliver White #
15. Will Parkinson #
16. Liam Thornley #
17. Ryley Thornton # 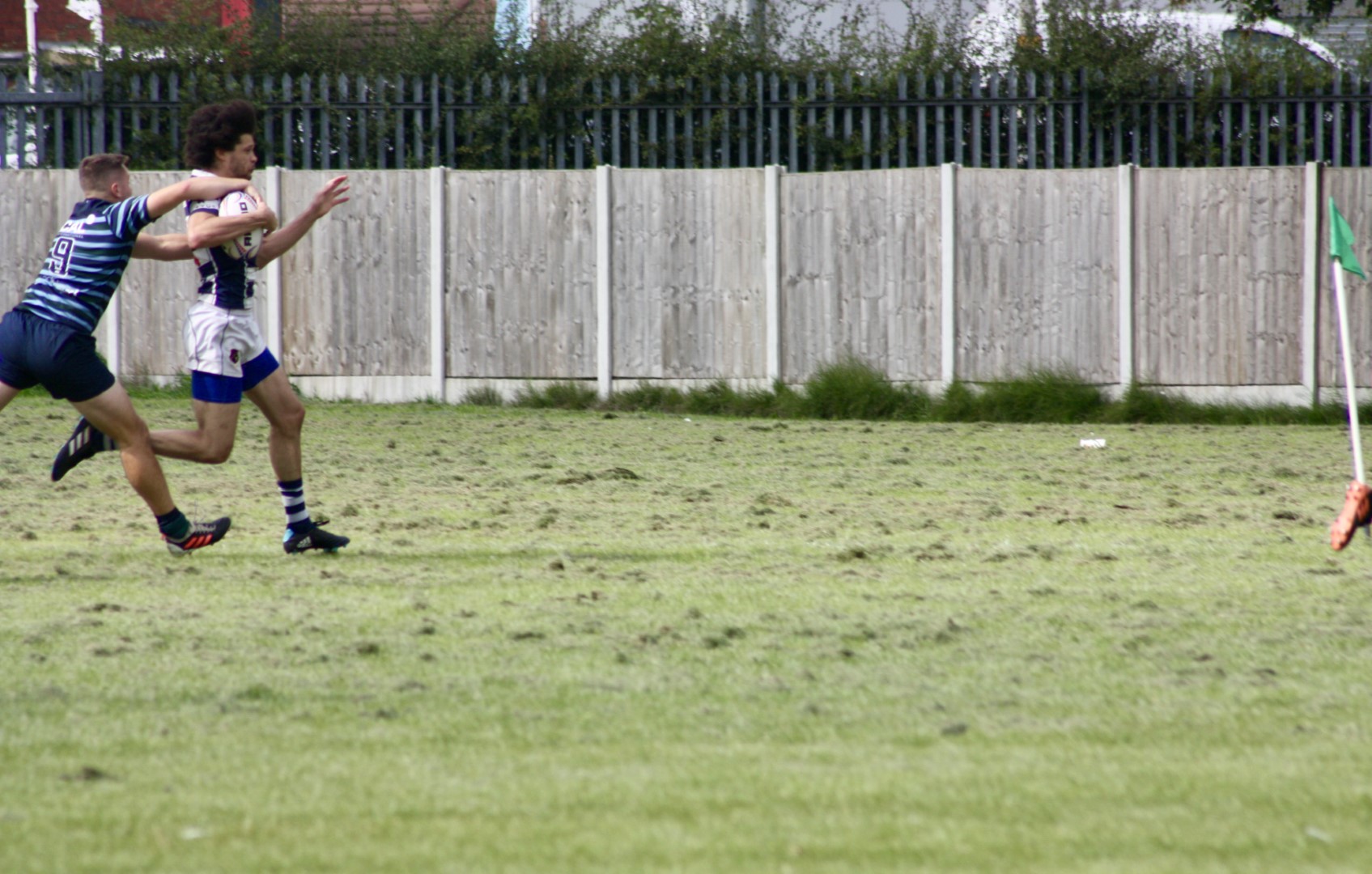 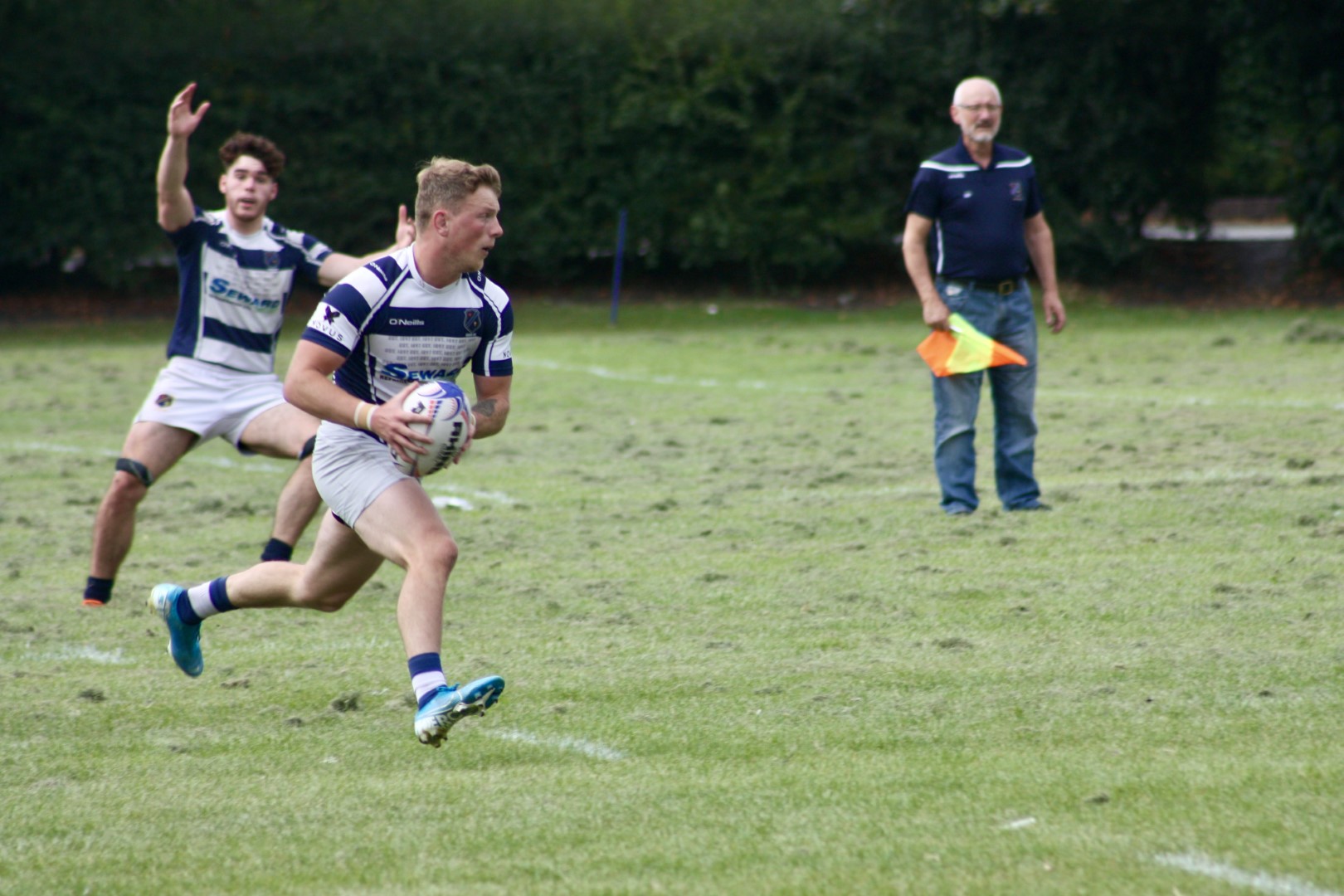 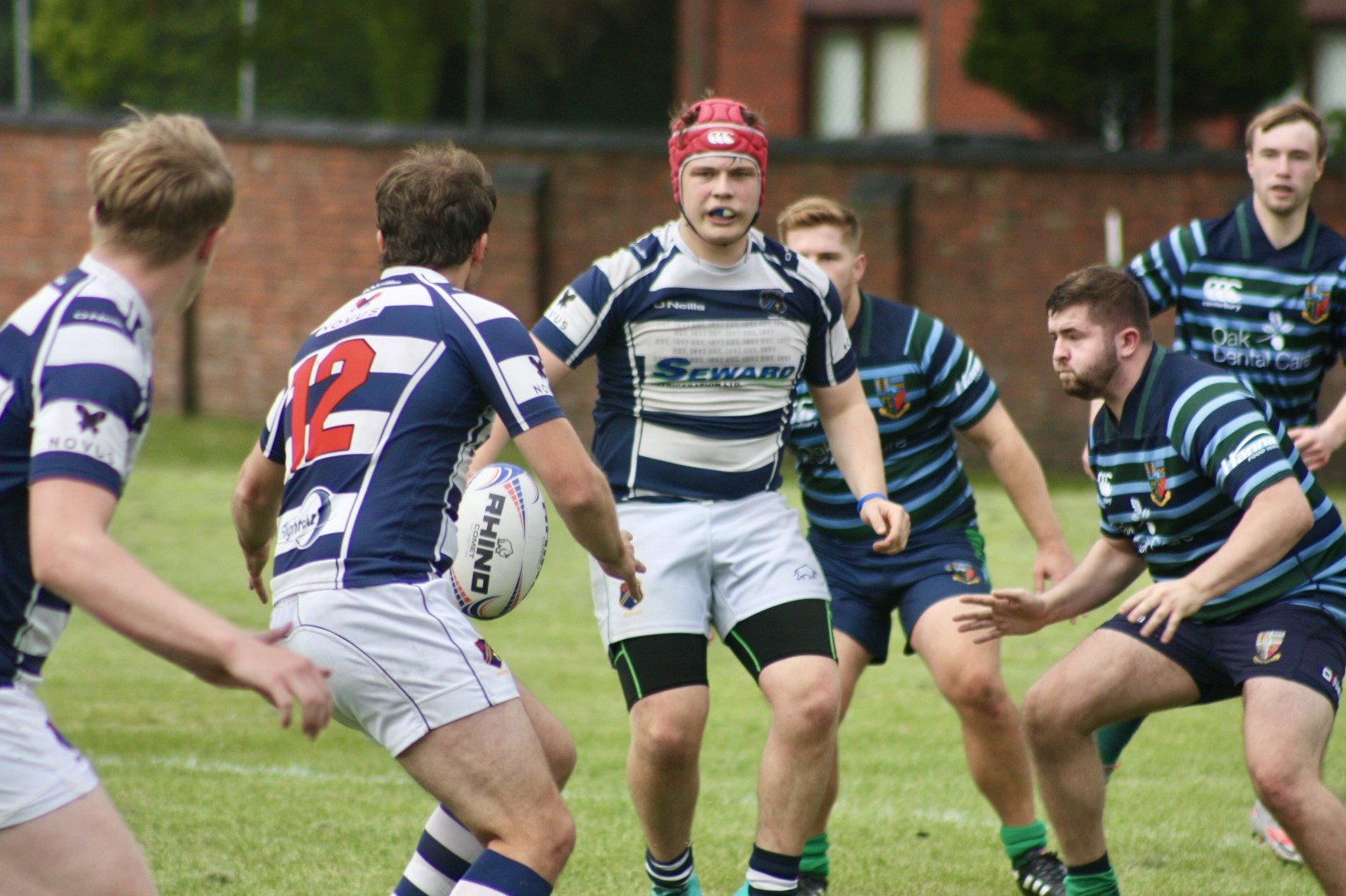 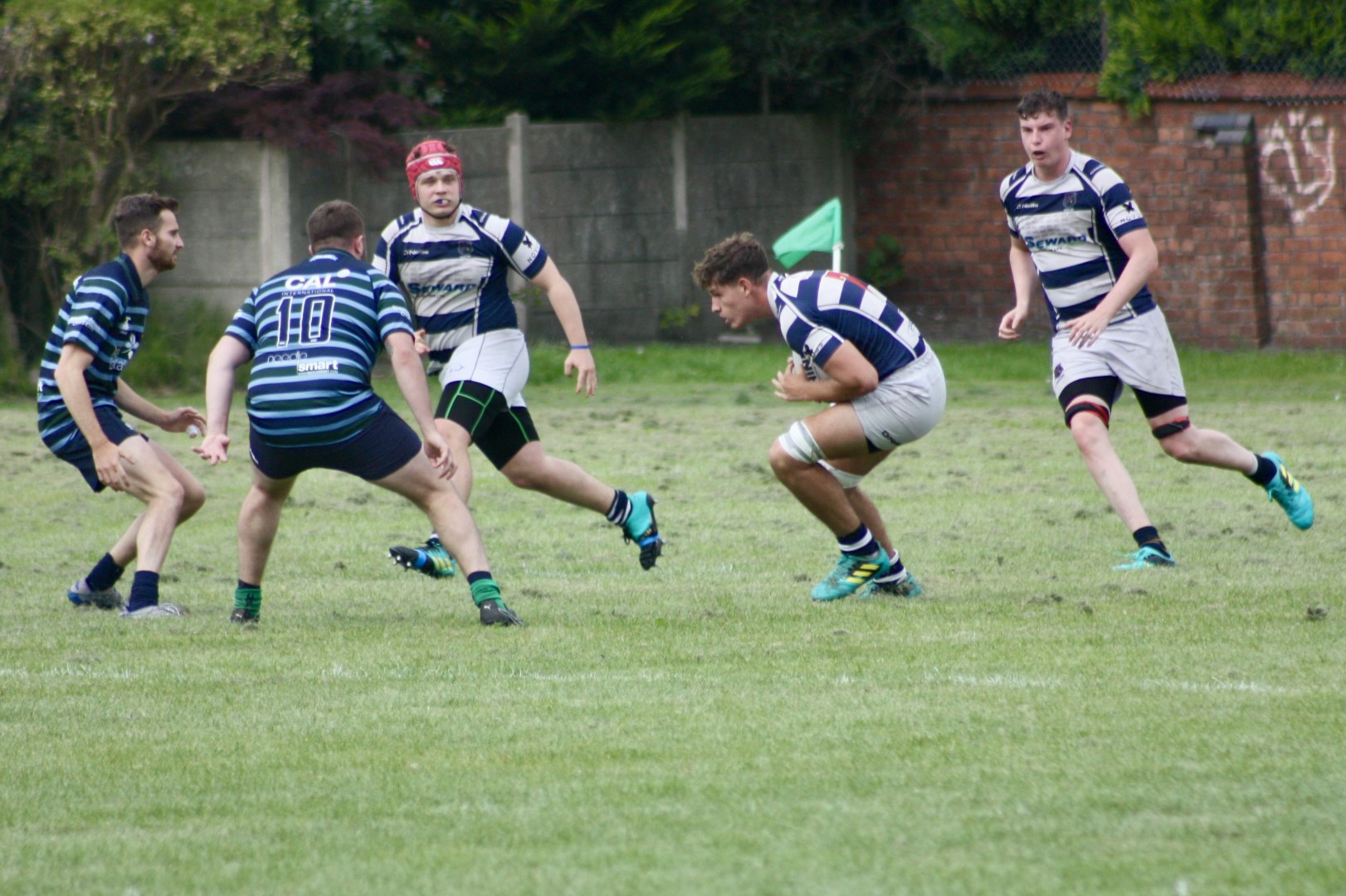 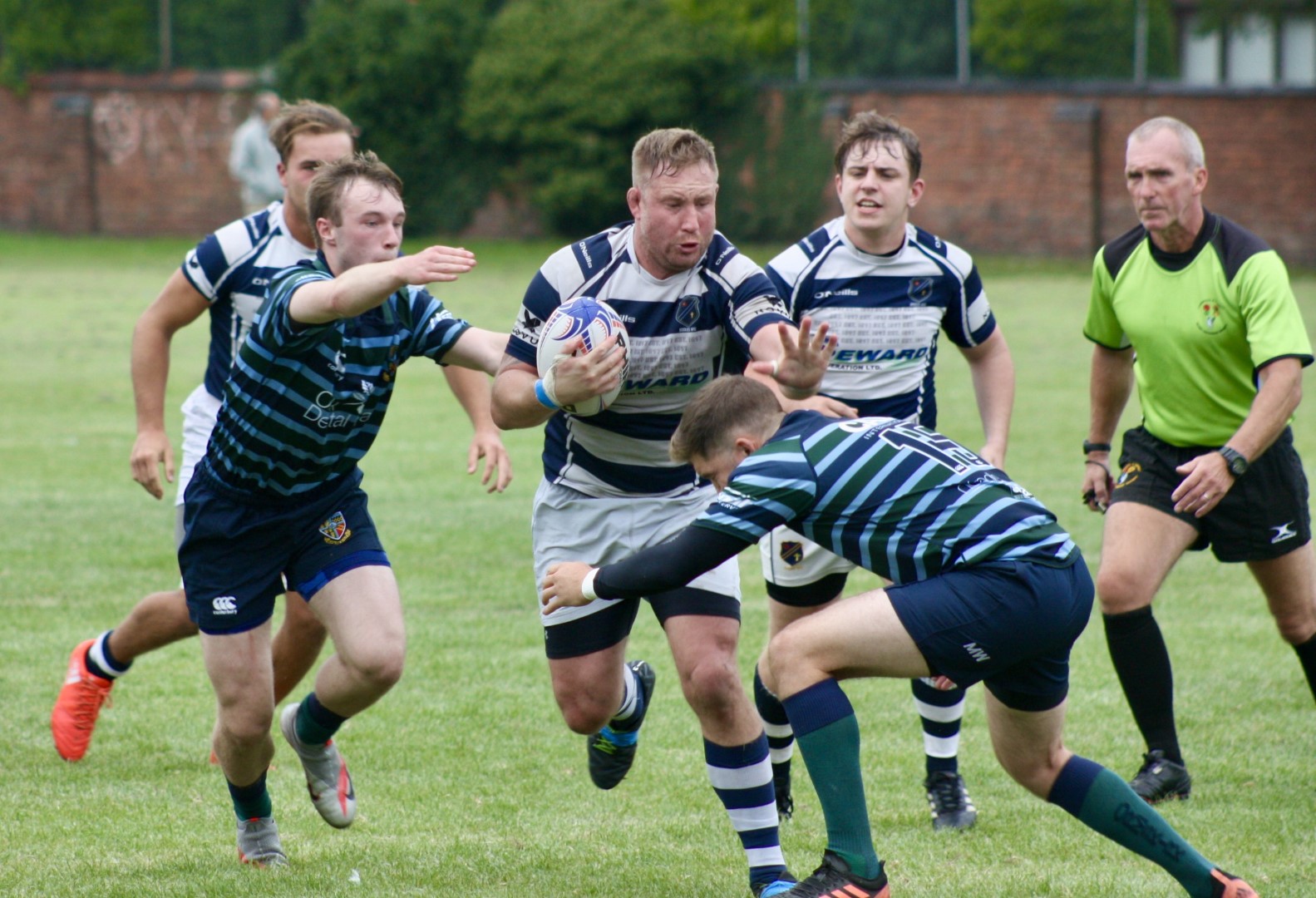 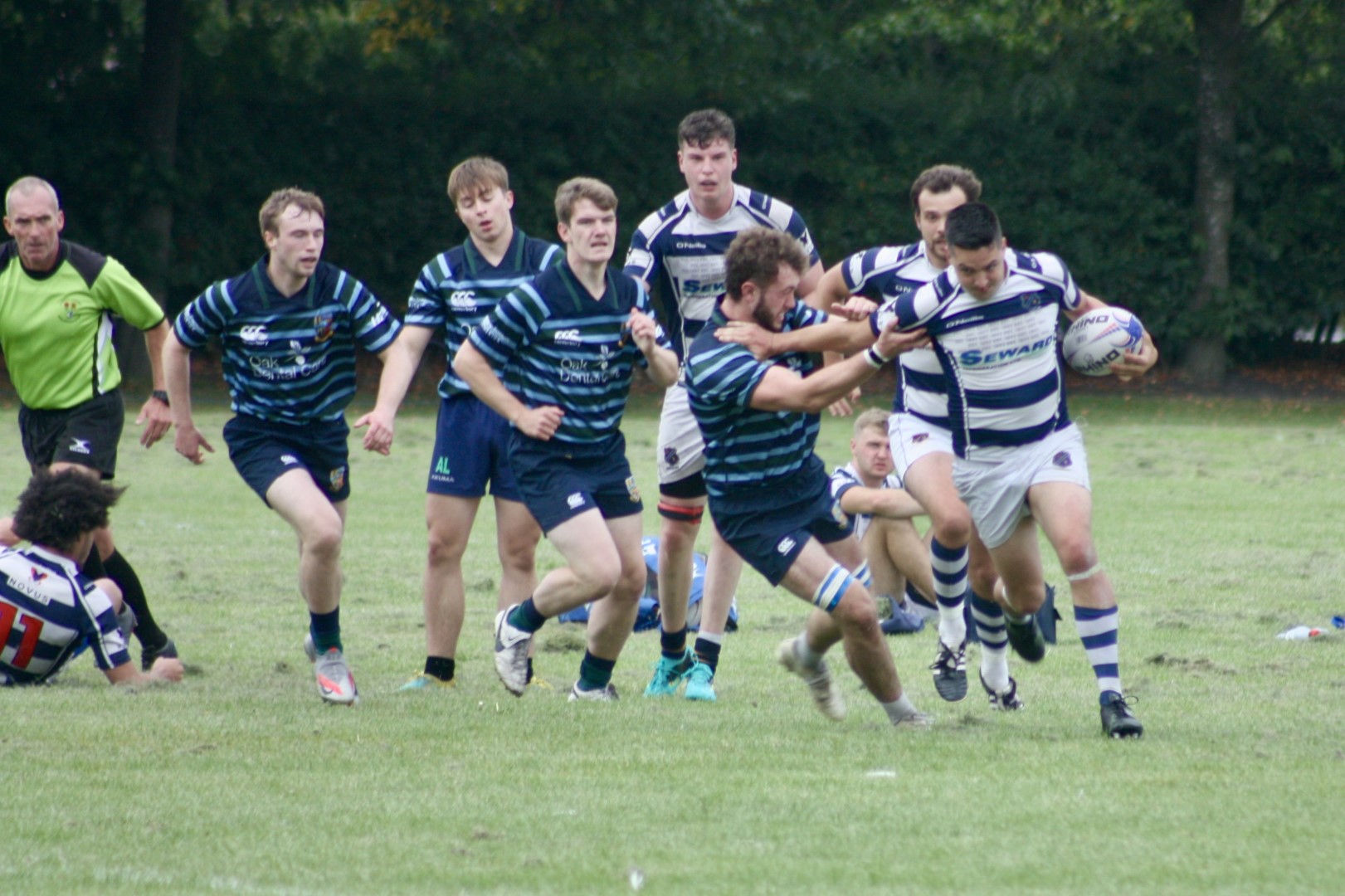 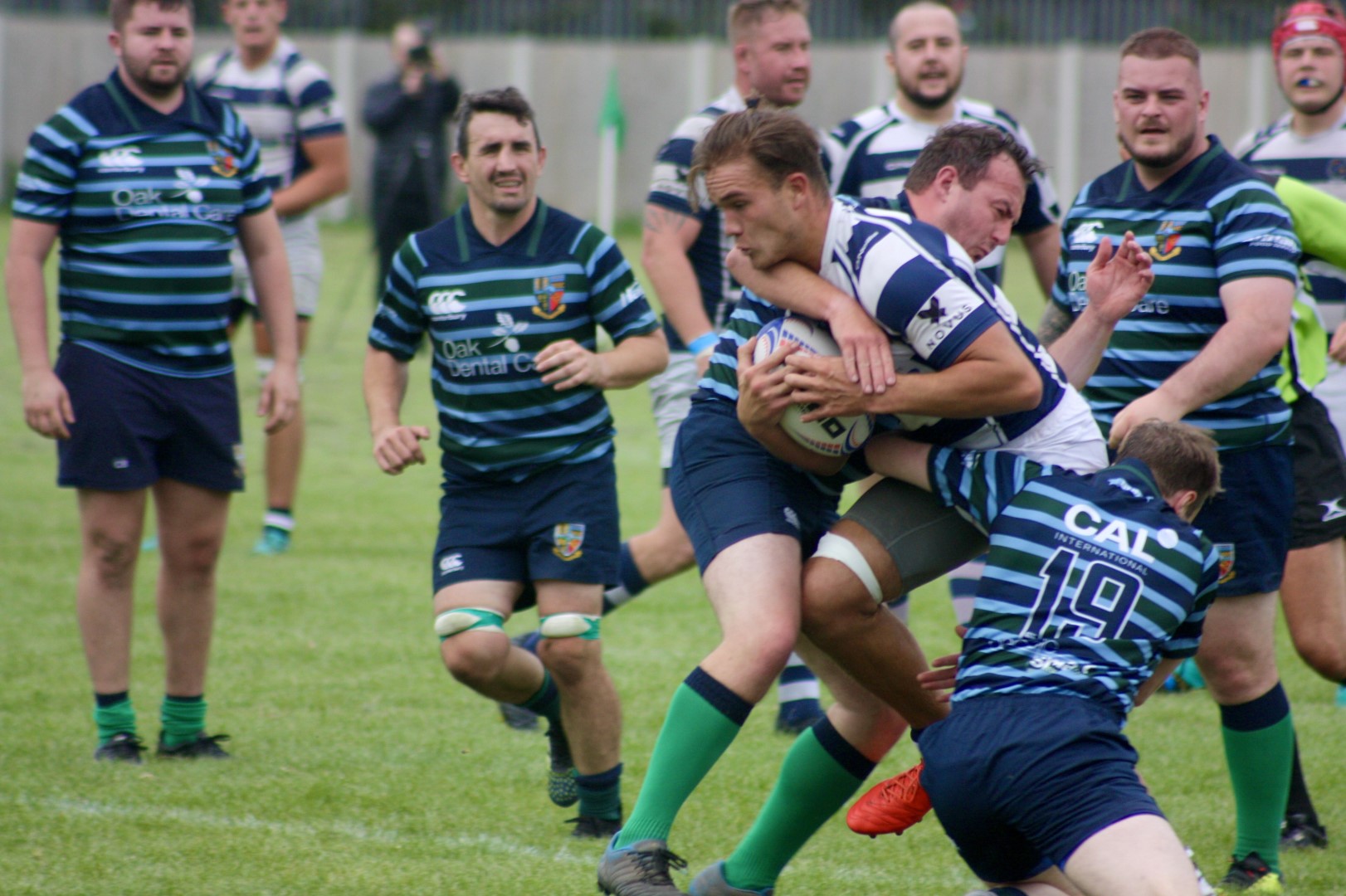 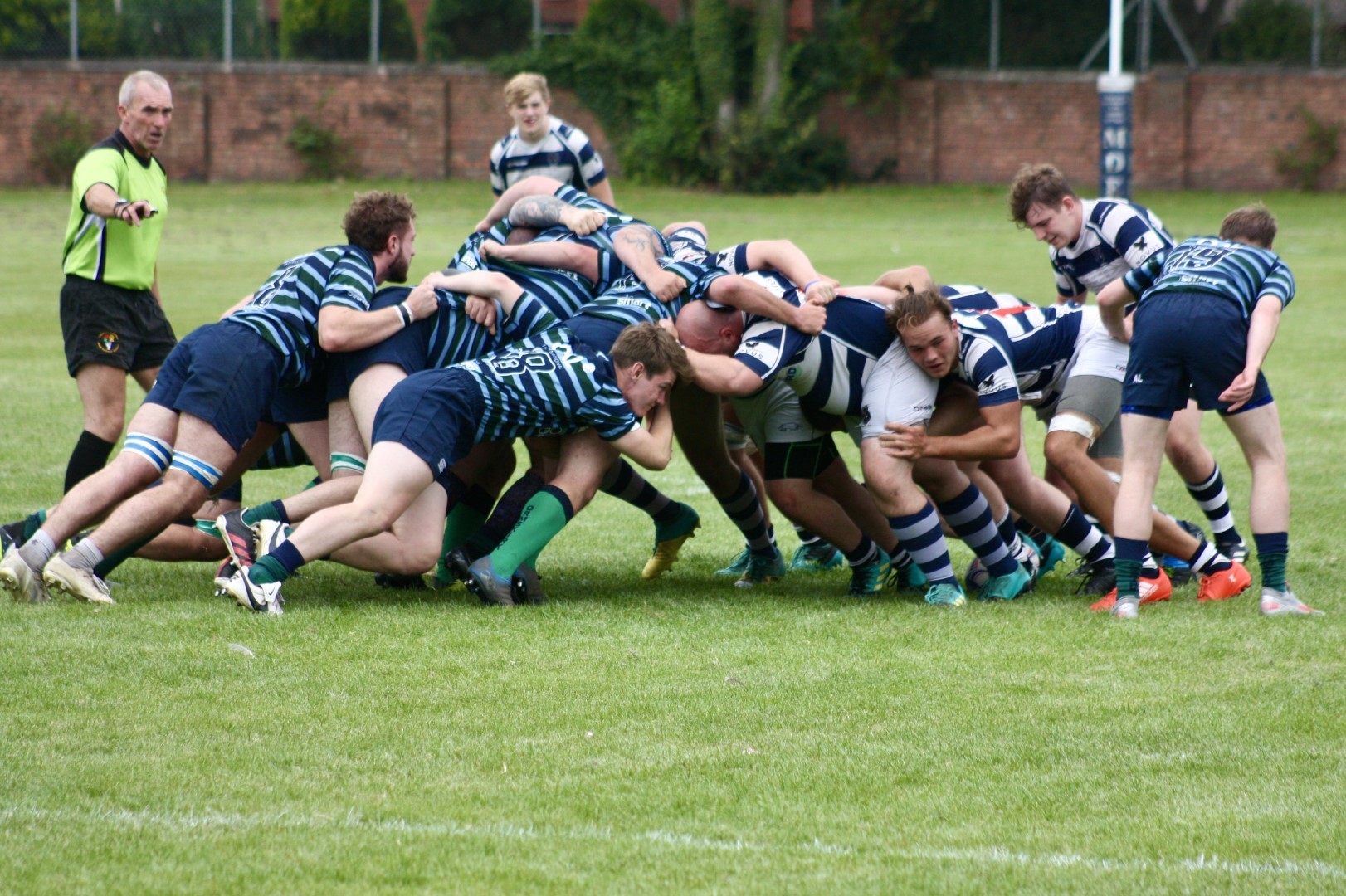 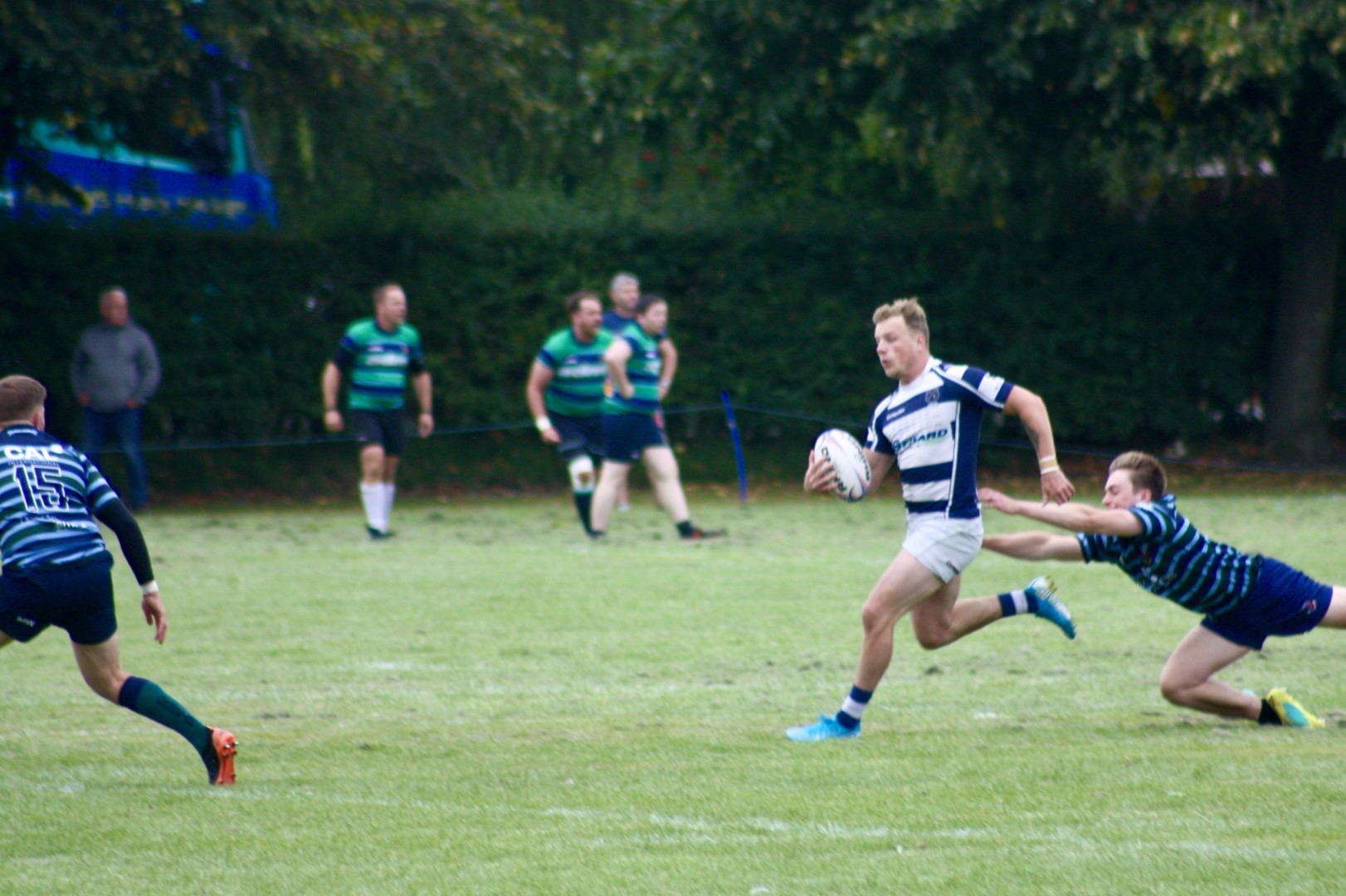 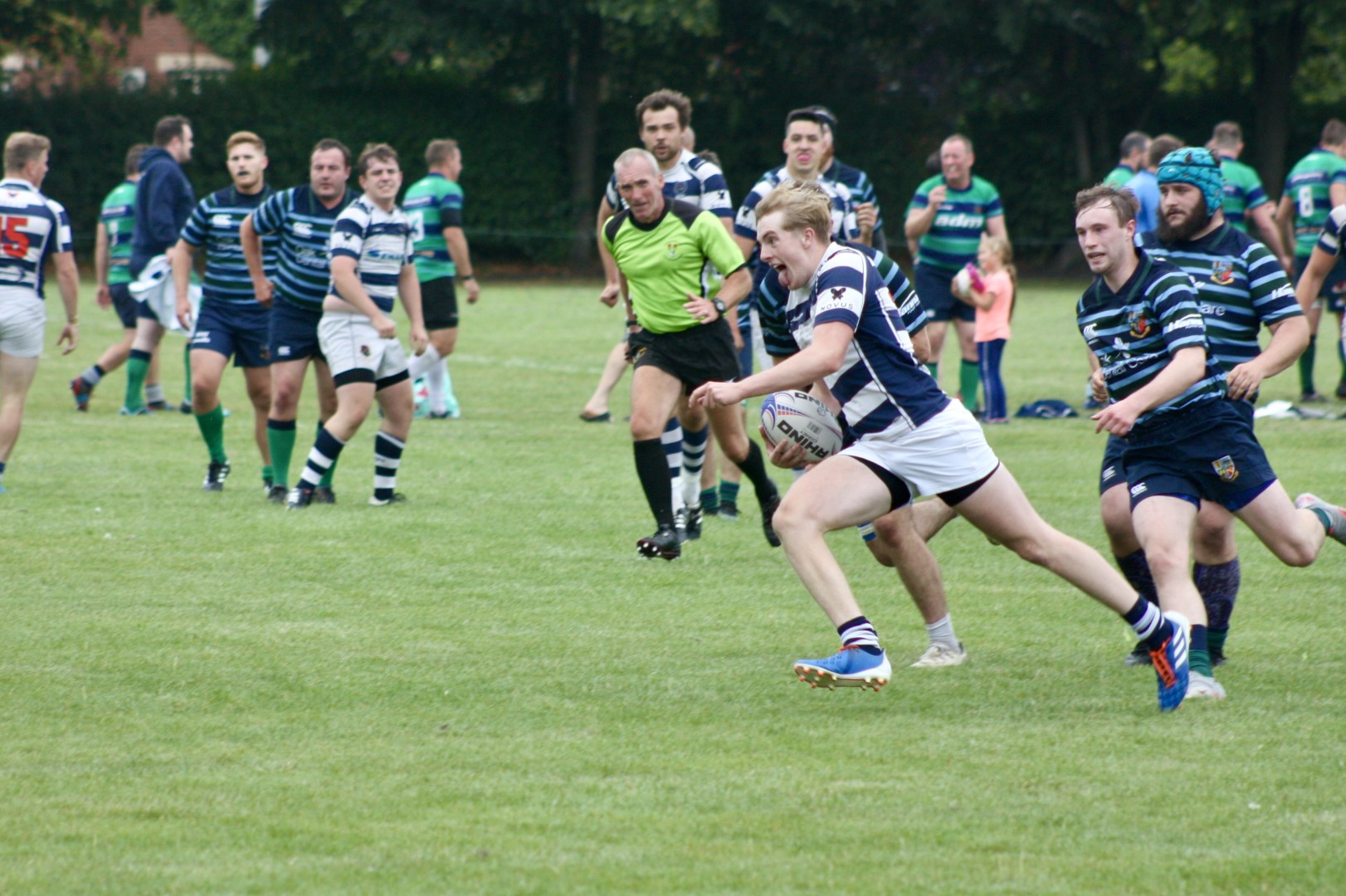 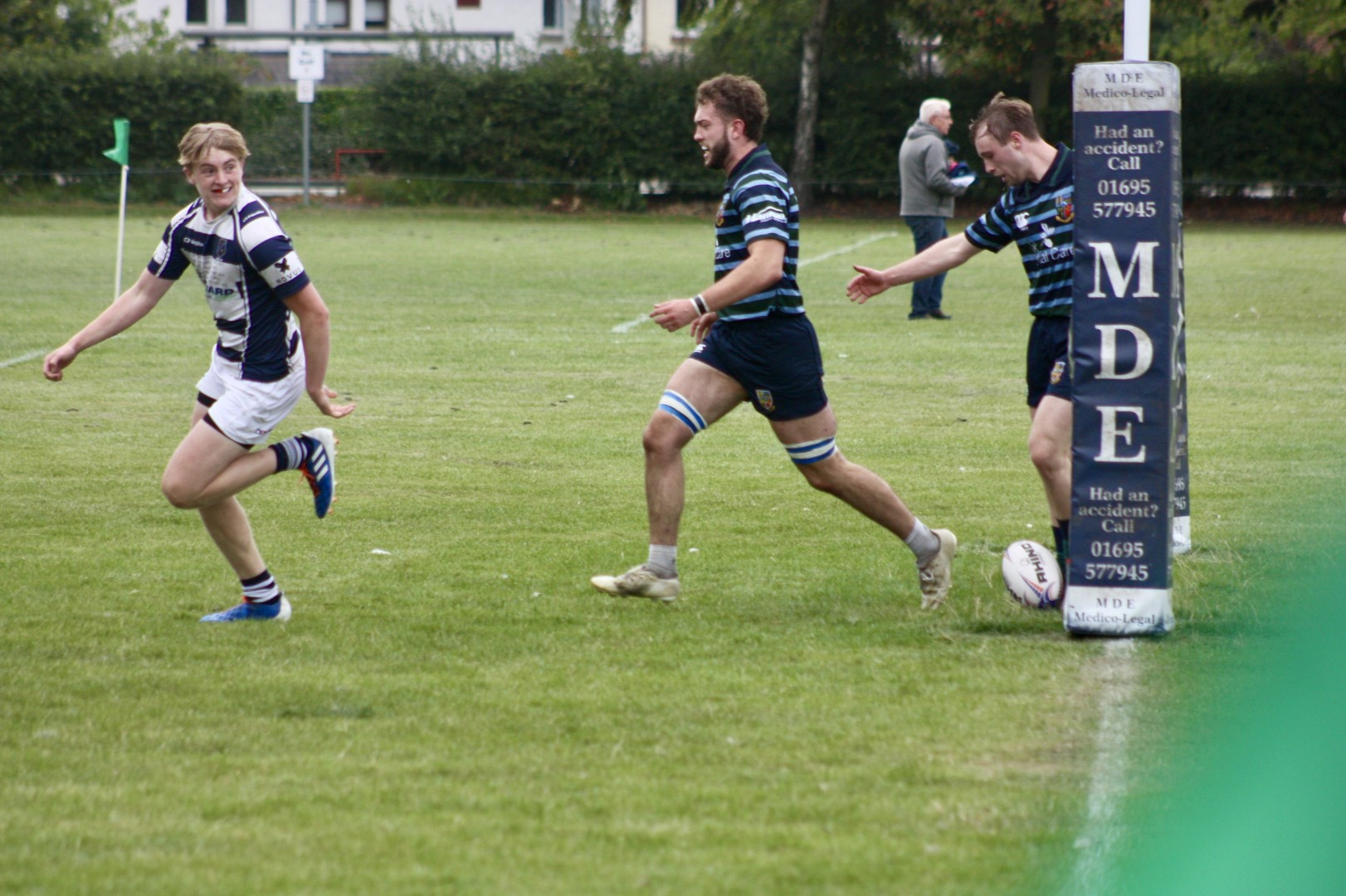 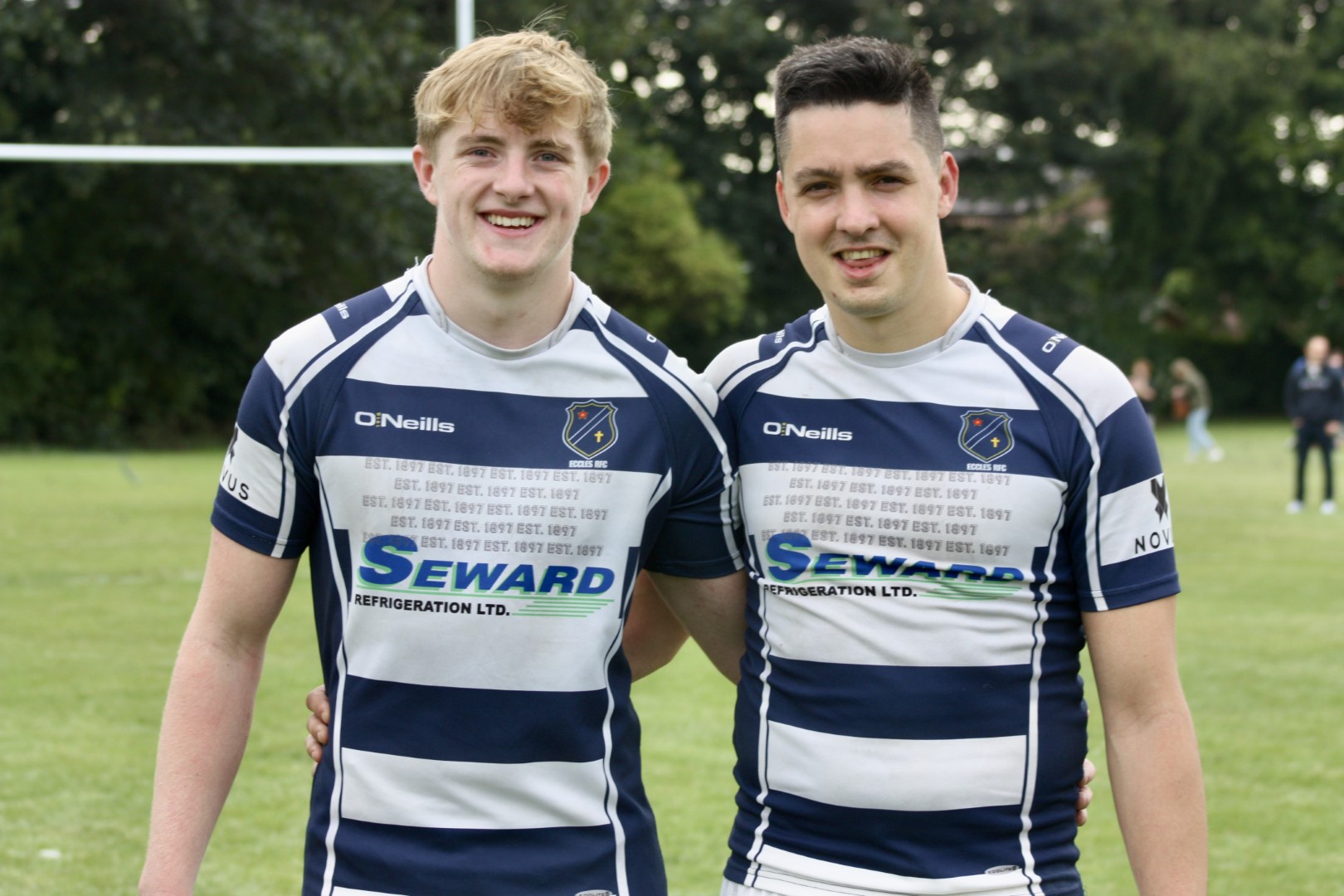 On a beautiful day for rugby the Eccles 2s ran out in the sun at Clay Lane to compete in thier opening game of the season. The first half was an evenly balanced contest, with Eccles dominating the scrum until Captain John Hibbert had to leave the field (torn calf muscle out for 6/8 weeks). Thereafter scrums were uncontested. The Eccles brand of rugby saw an opening try, with Tim Balogun scoring under the sticks, Swainey scoring the conversation. Eccles were doing well against a good Bowdon team, however Luke Cullen damaged his hamstring and Eccles had to play the last 15 mins of the half with 14 men and were still ahead at the break.  HT 0-7.
Bowdon began to exploit the spaces immeadatley after half time and scored to even the game (7 -7). A lapse in 14-man Eccles defensive concentration leaves Bowdon to score again (14-7) and from this point, the points went in one direction. Despite Peter Lillie putting in a monster shift and new recruit Dale doing well, Eccles tired and some poor tackling lead to more tries for Bowdon. The second half was the polar opposite of the first half and, as is often the case, the scoreline does not reflect the game. Eccles at times played some good flowing rugby and a full team, and some replacements, may have seen a different outcome. An away defeat but a good performance.  FT 33-7.
1. John Hibbert
2. Sean Baines #
3. Ross Eaton #
4. Dale Hughes
5. Javi Mazinares
6. Josh Kilby #
7. John Wailing
8. Tom Mayo #
9. Nathan Newlove #
10. Sam Long
11. Tim Bologun #
12. Mathew Twigg #
13. Mat Swain
14. Wes Chiseri
15. Tallis Keeler #

After a frustrating 18 months of Covid delays, the Senior Colts finally got what they wanted, a game of competitive Rugby. We did a few adapted friendlies in the spring, but this was the real thing: Full Contact, scrums, mauls and lineouts, with actual points for the winner.

Eccles started brightly, with some great possession and attacking play with Connor almost scoring with a solo run after few minutes from a penalty tap and go. An accidental infringement from Sale in the breakdown led to an Eccles scrum, which after several phases made its way across to Henry who went over by the corner flag. A frustrating period of play followed characterised by Eccles playing their way up into the 22 but giving away penalties allowing Sale to kick their way back into territory. The saving grace for us was our solid lineout, where we consistently disrupted Sale stopping them getting clean ball. But the sheer number of penalties eventually allowed them to level the score. The remainder of the half continued in the same vein, Eccles winning the open play but losing territory to penalties.

After a frank group discussion at half time the lads committed to cleaning up their play and supporting each other into the breakdown.

This new attitude showed immediate results with Eccles pinning Sale firmly into their 22. Eventually a panicked fullback clearance from Sale flew straight to touch. Eccles secured the lineout, with sale knocking on at the next ruck giving Eccles a 5yd attacking scrum. After a few resets Jake claimed the ball passing it wide to Louis who strode over for his opening try of the season. History repeated after the restart, with this time Will B taking the posts after a penalty to give us a 13:5 lead.

Unfortunately, Henry was tackled as he claimed the restart twisting his knee. For a team playing with only 6 backs and one sub this was a worrying development.

With two forwards now playing in the backs we had to grind out the moves and phases, but Duncan still managed to go over for our third try.  Now with no replacements the heat took its toll as Sale could rotate their 7 subs. These fresh legs eventually showed, and in their first visit to the Eccles 22 Sale scored their second try. Eccles regrouped, and with the return of limping Henry showed their passion to hold on for the win - aided by a late Penalty from Will B.

A great game, especially when you consider that the lads hadn’t had a full squad training session since April. A little more practice in defence and we could equal our U16 season successes. Two special notes on this match: Firstly, a big thanks to Jack H, who playing in his first match for us, slotted straight into the team and impressed us all with his commitment and attacking play. Secondly, the Eccles Ladies, who stayed after their training to cheer our lads through a second half of searing sunshine. Thanks for the loyal support!

The sun was shining on the first outing this season for the under 17s as they travelled to face the combined force of Glossop & Marple.  Struggling for numbers, full credit must go to the hosts who loaned players to Eccles so a meaningful game could take place. Eccles started well and showed great organisation and resilience in the face of some constant early pressure. Although Glossop scored early in the first quarter the match stayed at 7-0 for the majority of the first half, which finished with a fantastic solo effort from Matthew Reed 7-5. In the second half Glossop & Marple took the upper hand and scored four unanswered tries but the score in no way reflected the fantastic effort Eccles continued to put in. Which culminated in two ventures into the oppositions red zone which were brilliantly defended from two definite tries for Akeal Stewart. In the final quarter of the game Eccles finally got their just deserts with an amazing try from Finley Whitworth who had constantly broken the defence of a tiring Glossop and Marple.
Eccles finished the stronger side with some huge tackles being put in right up to the final whistle; Tom Kemp certainly left his mark but unfortunately the final score was 36-10 in favour of Glossop and Marple. There were certainly some great signs of quality rugby which certainly inspires confidence of a successful season ahead.
Team:

Our U16s made a successful start to their season in front of a home crowd on Friday night, defeating Heaton Moor 24-5 in a game that remained in a 0-0 deadlock for the first 30 mins as the two teams attempted to outwrestle each other midfield.
A change in tactics and personel unlocked the visitor's determined defence. New recruit, prop, Abraham opened the scoring with his first try for the club driving for the line and taking the post with him! Scrum Half Joe was alert to the attacking opportnity and weaved through the defence to score the 2nd try behind the sticks, Winger Johnny backed himself on the outside to courageously cross the line in the corner for the 3rd try and Fly Half Leighton capped off the scoring with a line break and fourth try 10 minutes from full time. Heaton Moor suffered several injuires and full credit goes to the Eccles players who upheld the club's principles and volunteered to play for the opposition so a competitve game could continue.  A very enjoyable evening of rugby, sadly ended on a tragic note for Johnny who fractured his femur in a tackle in the last attacking play of the game. He has now undergone surgery which has inserted a titanium rod in his leg and the club sends its wishes to him for a full recovery. GET WELL WALSHY!
1. B Court
2. H Peacock
3. M Allcroft
4. M Gardiner
5. O Fleming
6. M Houghton
7. J Costello
8. J Lightbown
9. J Davies
10. S Dixon
11.R Pickavance
12. L Reeveley
13. H Clark
14. F Gillespie
15. L Strand
16. A Moncada
17. J Harrison
18. E Glynn
16. J Edwards
19. H Gregory
19. J Walsh
20. L Ormson
Tweet
Tweets by @EcclesRugby