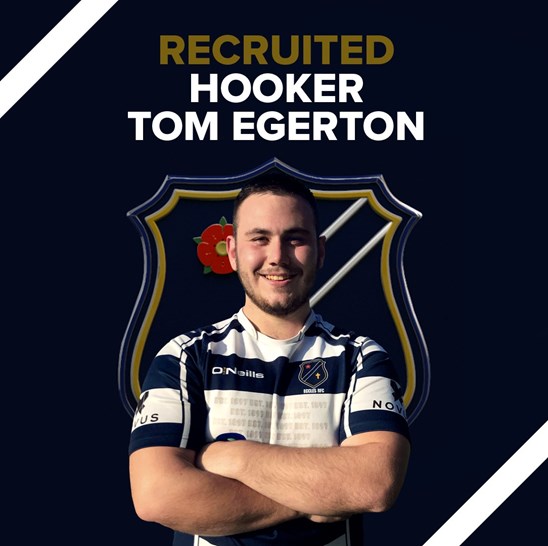 Eccles RFC is delighted to announce the enlistment of Hooker Tom Egerton.

DoR/Head Coach Sam Simpson made this statement on his newest recruit:

"It’s great to see that young players from other clubs are identifying Eccles RFC as a place they can come for personal development, as part of an ambitious playing squad who are determined to succeed on the pitch come Saturdays.
Tom has been training with us for a few weeks, whilst he considered opportunities away from his parent club Tyldesley RUFC to further progress his Rugby. I’m very happy he’s decided to join us here at Eccles for the 2019/20 season. I’ve heard nothing but great things about him from Captain James Wright, who played with him at Edge Hill University, and returning Prop Danny Wilson who enjoyed playing along side Tom for Lancashire U20s.
Tom’s recently been playing in the backrow and at 12 during the past year, but really wants to get back to playing Hooker, so personally I’m excited about the mobility and ball carrying he’ll add to our pack. And I'm especially looking forward to helping Tom in developing his set piece, as this is the area he’ll be judged in as a Hooker.”

Tom has this to say on his rugby career to date:

"I began playing at Tyldesley RUFC at 10 years old and remained there, through the mini and junior section, up to Junior Colts. I moved to Sale FC to play Senior Colts and at the end of the season I was offered a contract to play for the Sale Senior side. During my time at Sale FC I represented Lancashire under 20s in the Jason Leonard Shield Competition, before leaving to study at Edge Hill University. Whilst studying, I returned to Tyldesley RUFC as it was close to home and went on to captain the 1st team and represent the Lancashire Royals in my last year.
I’ve been playing University rugby with James Wright for the last three years, he’s spoken highly of Eccles RFC and about the aspirations of the club going forward. After speaking with Sam, I liked the ambition of the club and the opportunity to play in a young side which wants to achieve multiple promotions. I’ve enjoyed training so far and the lads have been really welcoming. I’m looking forward to seeing what this team can achieve this season."
Tweet
Tweets by @EcclesRugby